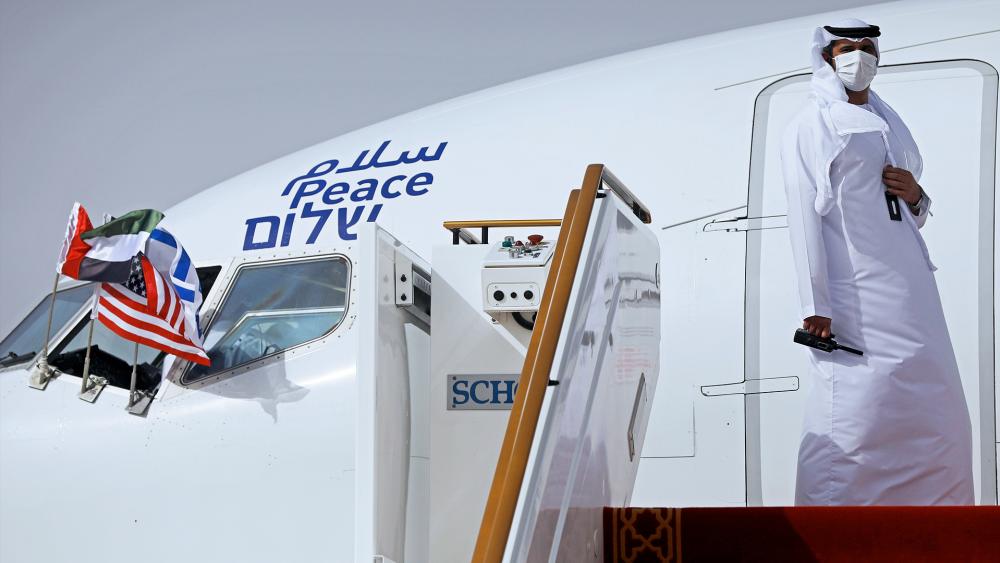 In this Monday, Aug. 31, 2020 file photo, an official stands at the door of an Israeli El Al airliner after it landed in Abu Dhabi, United Arab Emirates.(Nir Elias/Pool Photo via AP, File)
6187363202001
Saudi Arabia Permits All Countries to Use its Airspace – Even Israel

JERUSALEM, Israel – Saudi Arabia announced on Wednesday that it will now allow flights “from all countries,” including Israel, to use its airspace to fly to and from the United Arab Emirates.

The kingdom released a vaguely worded statement that does not explicitly mention Israel but comes just days after Saudi Arabia allowed an Israeli commercial plane to use its airspace to make the first-ever direct flight to the UAE.

The flight carried Israeli and American delegations to the Emirati capital where they worked to finalize the US-brokered peace agreement between Israel and the UAE.

Although Saudi Arabia is not ready to normalize ties with Israel, Israeli Prime Minister Benjamin Netanyahu called the Saudi decision “another tremendous breakthrough.”

"For years, I have been working to open the skies between Israel and the East,” said Netanyahu.

“Israeli planes and those from all countries will be able to fly directly from Israel to Abu Dhabi and Dubai, and back. Flights will be cheaper and shorter, and it will lead to robust tourism and develop our economy,” he added.

He also added that “there will be a great deal more good news to come.”

Kushner visited Bahrain and Saudi Arabia on Tuesday in a bid to convince Israel’s Arab neighbors to make peace with the Jewish State.

Saudi Arabia and Bahrain appeared to show hesitation about establishing diplomatic ties with Israel in the absence of an official Israeli-Palestinian peace agreement.

New York Rabbi Marc Schneier, President of the Foundation for Ethnic Understanding, has been building relations with Gulf States for more than 12 years.

He says the UAE-Israel peace deal is a sign that the region is more open than ever to building relationships with Israel.

“[The] announcement is historic and it also signals the beginning of the warming of relations between the Kingdom of Saudi Arabia and Israel. While they are still deeply committed to the Palestinian people, this first step is a big one and should be celebrated," Schneier told CBN News.