'Great Tragedy' in Israel as More Than 40 Killed, 150 Injured in Stampede 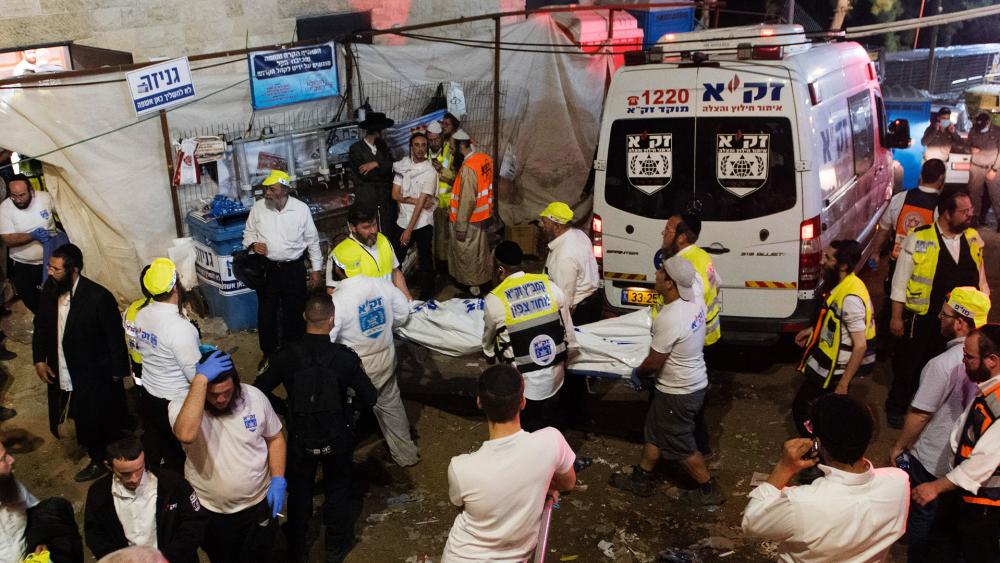 Israeli security officials and rescuers carry a body of a victim who died during a Lag Ba'Omer celebrations at Mt. Meron in northern Israel. (AP Photo)
6251238913001
'Great Tragedy' in Israel as Dozens Killed, Over 100 Injured in Stampede

JERUSALEM, Israel – At least 45 people were killed and roughly 150 others were injured during a stampede Friday morning at a Jewish religious festival in northern Israel.

The disaster took place at Mt. Meron in northern Galilee where thousands of mostly Ultra-Orthodox Jews gathered for a festival called Lag BaOmer. The festival honors Rabbi Shimon Bar Yochai, a 2nd-century sage and mystic who is buried there. It is unclear what caused the stampede at the popular event, but witnesses described watching people getting crushed.

The Jerusalem Post reported that at least six Americans with ties to the New York area were among those killed.

A witness, identified only by his first name Dvir, told Israel’s Army Radio that “masses of people were pushed into the same corner and a vortex was created.” He said a first row of people fell down, then a second row also began to fall down from the pressure of the stampede.

Prime Minister Benjamin Netanyahu called the event a “great tragedy” and said, “everyone is praying for the recovery of the injured.”

An officer from Israel’s Zaka emergency rescues service, which typically deals with cleaning up the aftermath of suicide bombings and terror attacks, told Ynet news “I’ve never seen anything like this…We don’t know exactly what happened, but the result is unthinkable.”

Heller told Army Radio “no one had ever dreamed” something like this could happen. “In one moment, we went from a happy event to an immense tragedy,” he said.

Netanyahu declared Sunday a national day of mourning for the victims.

“There were heartbreaking scenes here. People who were crushed to death, including children,” Netanyahu says after visiting the scene.

He also promised a speedy investigation.

“We will carry out a comprehensive, serious, detailed investigation to ensure this kind of disaster never happens again,” he said.

Some 90,000 people were attending the first event of its size since the coronavirus restrictions were lifted.