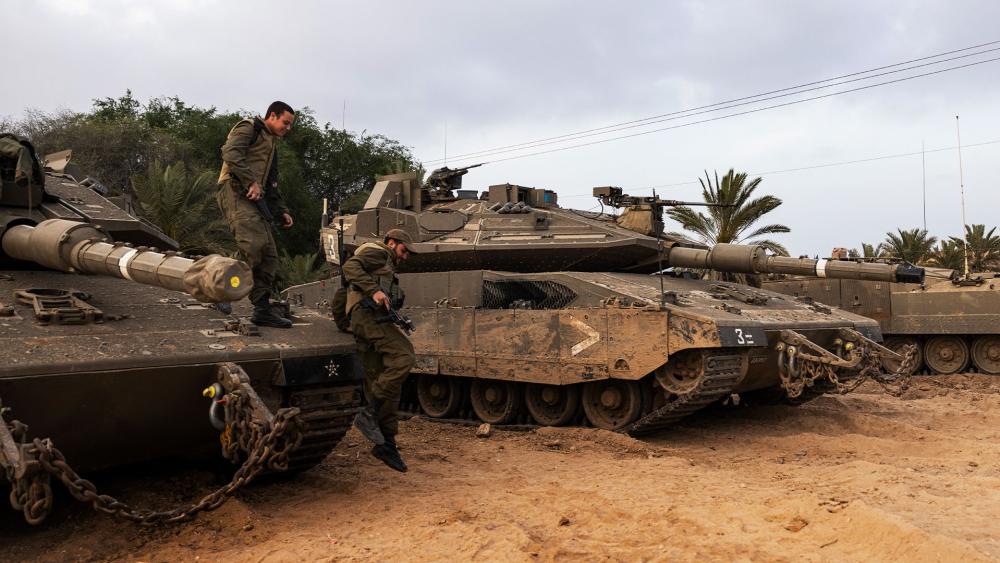 Israeli soldiers jump from a tank in a front position near the Israel Gaza border, Saturday, April 24, 2021. (AP Photo/Tsafrir Abayov).

Gaza terrorists fired more than 40 rockets at Israel over the weekend. Israel conducted counter strikes and also restricted the fishing zone off Gaza’s coast. Fishing is a source of revenue for Gaza, so Israel restricts it to pressure Hamas to stop its rocket attacks.

“The decision was made in light of repeated terrorist acts from the Gaza Strip against the citizens of the State of Israel during the recent days, which constitute a violation of Israeli sovereignty,” said a statement from the Coordinator of Government Activities in the Territories, a branch of Israel’s military responsible for liaising with the Palestinians.

“Hamas is held accountable for all that is done in and from the Gaza Strip towards Israel, and it will bear the consequences for the violence committed against the citizens of the State of Israel, the statement said.

The rocket attacks come amid a surge of violence between Jews, Palestinian Arabs living in Jerusalem and Israeli police. Palestinians have had nightly scuffles with Israeli police outside of Damascus Gate in Jerusalem since the beginning of the Muslim holy month of Ramadan. Both Jews and Arabs have also been the victims of racist attacks in the holy city in recent days.

Hamas called on Arabs in Jerusalem  to continue “mobilizing in the Old City and at its gates.” The terror group also said nightly patrols of Jerusalem Palestinians should be formed to protect Arab residents from attacks by Jewish extremists.

Israeli Prime Minister Benjamin Netanyahu held talks with top security officials about the violence in Gaza and Jerusalem. He instructed officials to be ready for “every scenario” in Gaza. In Jerusalem, he appealed for calm and said Israel would guarantee “freedom of worship” for everyone.

“We ask now for people to obey the law and I call for a calming of tempers on all sides,” he said.

The UN envoy to the region, Tor Wennesland, condemned the violence and said the United Nations is working to keep the peace in Jerusalem.

“The provocative acts across Jerusalem must cease. The indiscriminate launching of rockets towards Israeli population centers violates international law and must stop immediately,” he said. “I reiterate my call upon all sides to exercise maximum restraint and avoid further escalation, particularly during the Holy month of Ramadan and this politically charged time for all.”

Meanwhile, the Israeli military’s chief of staff, Lt. Gen. Aviv Kochavi, is weighing “a series of steps for possible responses,” and preparations if the situation with Gaza escalates. He also postponed a trip to the United States that was scheduled for Sunday.