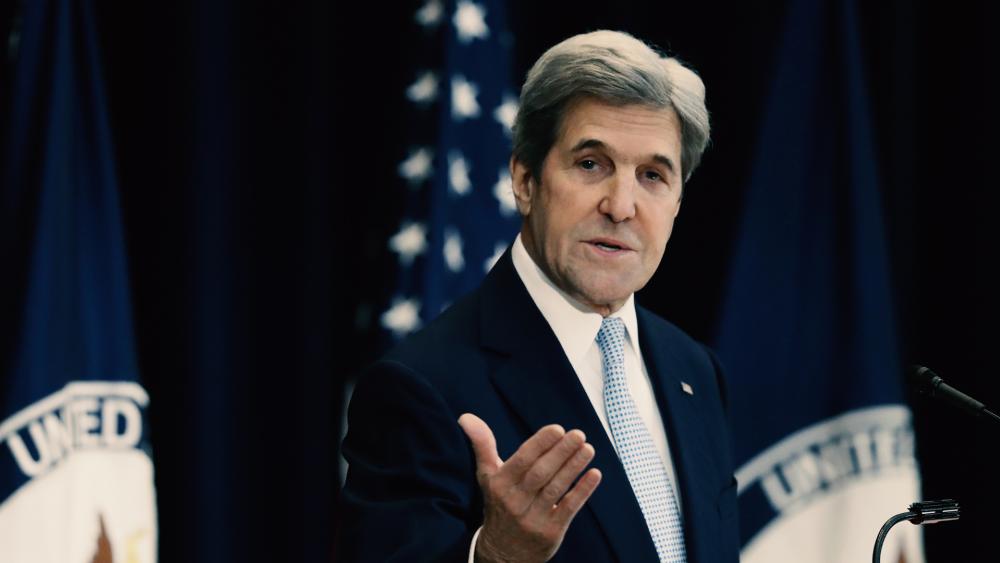 The Iranian foreign minister said in the recording, reported by The New York Times on Sunday, that Kerry told him Israel had attacked Iranian targets in Syria “at least 200 times.” As Secretary of State, Kerry spoke with Zarif constantly while the U.S. and Iran negotiated the 2015 nuclear accord. Zarif claimed in the 3-hour leaked recording that he was often kept in the dark about foreign policy issues and was astonished to hear that Israel had attacked Iranian interests in Syria hundreds of times. Kerry himself does not appear in the recording and Zarif did not specify when Kerry allegedly shared this information.

Zarif’s version of events has not been independently verified, but conservatives were quick to call for Kerry’s resignation from President Joe Biden’s National Security Council.

Nikki Haley, former governor of South Carolina and former ambassador to the UN, called the claims in the New York Times report “disgusting on many levels.”

“Biden and Kerry have to answer for why Kerry would be tipping off Iran, the number one sponsor of terror, while stabbing one of our greatest partners, Israel, in the back,” Haley said on Twitter.

"Before we cut a deal with Iran that reduces Americans’ security," Pompeo said, "it would be good to know what the arrangement, if any, may have been between these two leaders."

"These reports are concerning—I’d like the opportunity to ask Secretary Kerry about this in a closed hearing," Sen. Tom Cotton (R-AR), a member of the Senate's Select Committee on Intelligence and its Armed Services Committee, told the Free Beacon.

Kerry denies the conversation ever happened.

“I can tell you that this story and these allegations are unequivocally false. This never happened — either when I was Secretary of State or since,” Kerry said on Twitter.

It is unclear if the alleged conversation would have revealed any classified information since Israel has done little to deny reports of the hundreds of strikes it has carried out against Iranian interests in Syria over the years. Israel publicly reported that it carried out more than 200 airstrikes in Syria in 2018, and the recording does not specify if Kerry allegedly told Zarif about the operations before or after Israel made these airstrikes public information.

“I don’t know if we should trust that tape or not. If it’s true, it’s very damaging,” Graham said. “I like John Kerry, but that would not be helpful and it would be very problematic if it were true. But let’s wait and see how authentic this is.”

State Department Spokesperson Ned Price told reporters on Monday he would not comment on the “purportedly leaked material” and could not “vouch for the authenticity of it or the accuracy of it.”

“I would just make the broad point that if you go back and look at press reporting from the time, this certainly was not secret,” Price said. “And governments that were involved were speaking to this publicly, on the record.”

The recording, originally leaked by a London-based news channel, offers a rare look inside Iran’s government and set off a firestorm in the Islamic Republic. The recording was reportedly part of an oral history program documenting the work of the Iranian government.

It also comes as the Biden administration tries to resurrect the nuclear deal with Iran after Trump pulled out of the agreement in 2018. Republicans oppose the nuclear deal and have criticized Biden’s diplomatic efforts to limit Iran’s nuclear program.

In the tape, Zarif says his country is basically run by the Islamic Revolutionary Guard Corps (IRCG) and claims that he was left out of important decisions by Guard Gen. Qassem Soleimani, who was killed in a US drone strike in 2020.

Senate Minority Leader Mitch McConnell said Zarif’s comments about the IRCG’s power is further proof that the U.S. should not lift its sanctions on Iran in exchange for a better nuclear deal.

“We know that preemptive concessions will not secure a better deal, or make America or our allies more secure,” McConnell said on Monday.