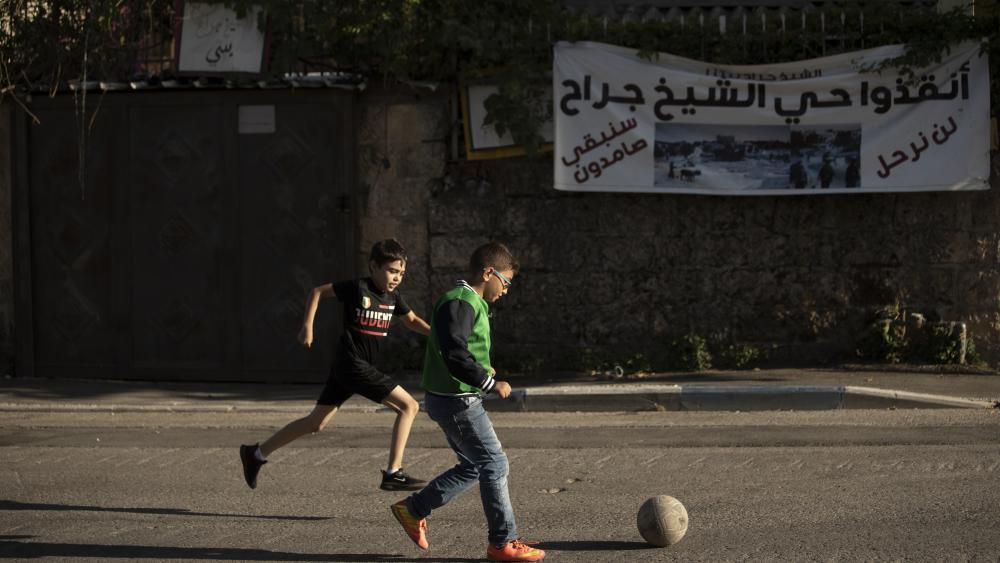 In this May 27, 2021, file, photo, Palestinian boys play soccer on their street in the Sheikh Jarrah neighborhood of eastern Jerusalem. (AP Photo/Maya Alleruzzo, File)

JERUSALEM, Israel – Israel’s Supreme Court on Monday presented a potential compromise to a contentious battle over homes in the eastern Jerusalem neighborhood of Sheikh Jarrah, where dozens of Palestinian residents face the threat of eviction.

“This compromise will give us breathing room for a good many years until either the land is properly regulated or there is peace,” Justice Yitzhak Amit told the courtroom on Monday.

The neighborhood has received international recognition and is a rallying cry for Palestinians. It sparked violent clashes between Jews and Arabs that spread throughout the country and helped trigger an 11-day war between Israel and Hamas in May.

The Jewish Nahalat Shimon organization is seeking the eviction of four Palestinian families who have lived in the neighborhood for decades. Nahalat Shimon argues that the homes were built on land that was owned by Jews prior to Israel’s war for independence in 1948 and cites an Israeli law that allows Jews to reclaim property lost in the war. No such right exists for Palestinians who also lost homes in the same conflict.

Jordan seized the neighborhood during Israel’s war for independence and controlled eastern Jerusalem from 1948 to 1967. The Palestinian residents, who were made refugees during the 1948 war, argue that Jordanian authorities offered them their homes in Sheikh Jarrah in exchange for giving up their refugee status.

Israel recaptured the property in the 1967 Six-Day War and transferred all previously-owned Jordanian land to Israeli custody.

Lower Israeli courts have approved the evictions of the four families, which includes about 70 people.

But according to the compromise under consideration by the Supreme Court, the Palestinian residents would be granted “protected” status, making it harder, but not impossible for them to be evicted. In exchange, the Palestinian families would be ordered to pay $465 in yearly fees to the Nahalat Shimon organization.

The compromise could delay their eviction for decades and the Palestinians would only have to recognize that Nahalat Shimon is registered as the property’s owner in Israel without formally conceding ownership to the organization.

The court gave both sides one week to respond and urged the Palestinians to accept the compromise.

Nahalat Shimon’s lawyer, Ilan Shemer, swiftly rejected the deal, arguing that the Palestinians must formally concede ownership to his client.

Shemer called the compromise "absolutely cheap" and said "If ‘owners’ isn’t put in writing, I’m not ready to meet again."

Abu Hussein, one of two lawyers representing the Sheikh Jarrah residents, said it is “possible” that his clients accept the compromise, “but we will need to consult on the matter.”