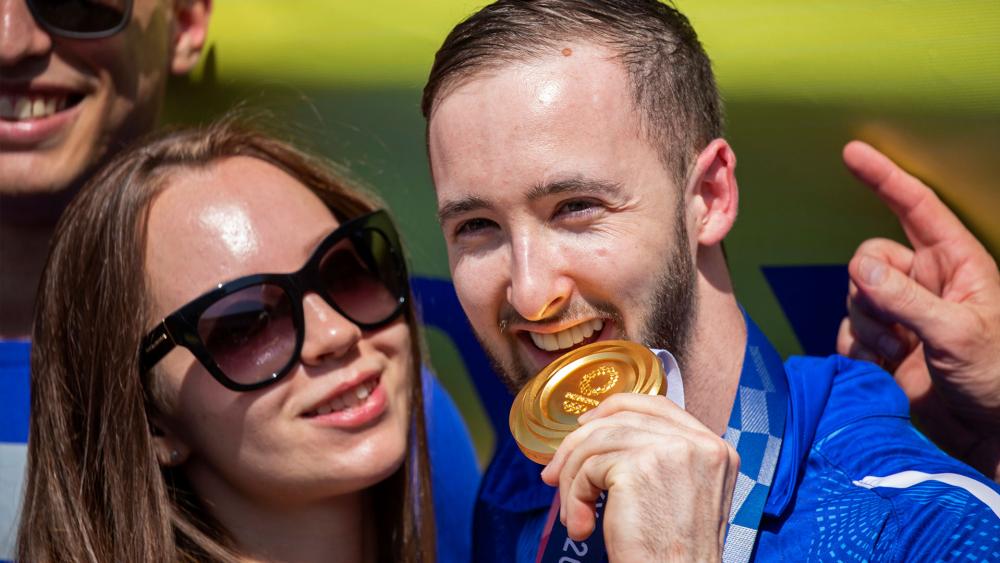 Supporters greeted him at Ben Gurion Airport with cheers and applause.

“This is really the warmest welcome I ever got in my life,” he said. “I want to cry from all the excitement, even more than the medal. I’m just kidding, but really it’s also a very fun moment.”

The 24-year-old’s routine earned him a score of 14.933, pushing him ahead of Spain’s Rayderley Miguel Zapata, who won silver and China’s Xiao Ruoteng, who took the bronze medal.

Dolgopyat told reporters during the medal ceremony we was “speechless.”

“I didn’t do my best routine… and I was worried it wouldn’t be enough for a medal… but everyone else was nervous and made mistakes and it was enough,” he said.

Israeli Prime Minister Naftali Bennett congratulated Dolgopyat and said his routine brought “immense pride and excitement to all of Israel.”

Dolgopyat has been hailed a national hero and also drove another key issue to the spotlight – marriage in Israel.

After his win, the Dolgopyat’s mother lamented in an interview that he cannot get married in Israel because he is not considered Jewish according to Orthodox law. The Ukrainian-born gymnast’s father is Jewish, but his mother is not.

Under Jewish religious law, one must have a Jewish mother to be considered Jewish. However, according to Israel’s Law of Return, anyone with at least one Jewish grandparent is eligible for Israeli citizenship.

This discrepancy means that tens of thousands of Israelis who immigrated to Israel and served in the military are banned from having ritual Jewish weddings and funerals. Instead, they must travel outside of Israel to wed. Christians and Muslims must also marry within their faith.

While Dolgopyat downplayed the controversy, Israeli Foreign Minister said he would fight to legalize civil weddings.

“It’s insufferable in my eyes that someone can stand on the podium, hear Hatikva, and get a gold medal in the name of Israel, and then not be able to wed here,” he said, referring to Israel’s national anthem. “It’s a situation that cannot continue, and we will fight for change.”