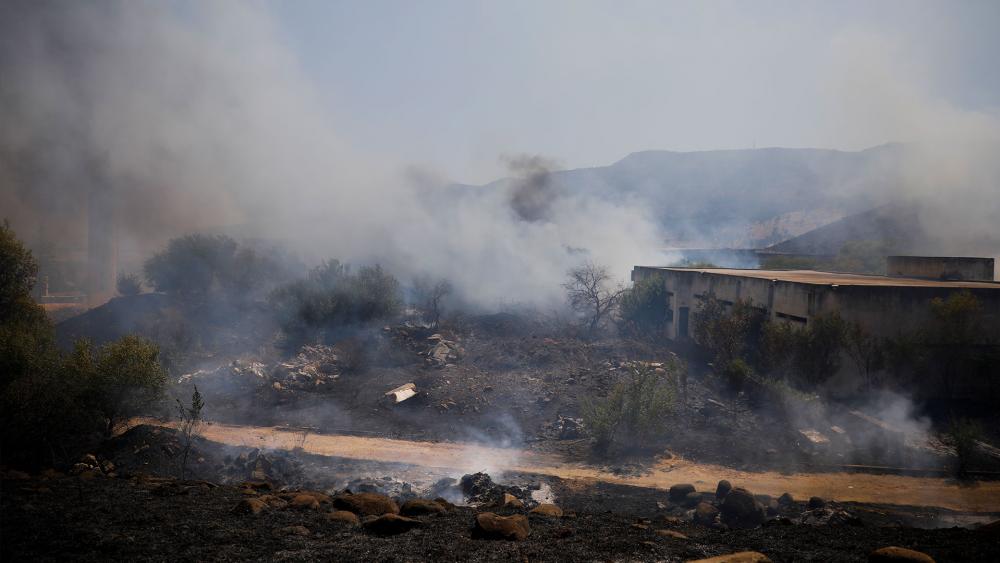 JERUSALEM, Israel – Israel’s military on Thursday launched rare airstrikes on Lebanon in response to three rockets that were fired from the country Wednesday afternoon. The Israel Defense Forces (IDF) said it carried out strikes on the rocket launch site responsible for Wednesday's attack, as well as an additional target that was previously used to attack Israel.

Wednesday and overnight, Israel also fired more than 100 artillery shells into Lebanon. “Not only is rocket fire from Lebanon at Israeli civilians an act of terrorism, but it also is indicative of the Lebanese government's lack of governance of terrorist organizations operating in Lebanon. The Lebanese government is responsible for all attacks from Lebanon,” the IDF said in a statement.

The rocket attack from Lebanon began just after 12 p.m. on Wednesday.

RAW FOOTAGE: 3 rockets were just fired from Lebanon toward northern Israel. 2 rockets landed in Israel, and 1 fell inside Lebanon.

In response, our artillery forces fired into Lebanon. pic.twitter.com/Sf3754RqRU

Two of the rockets landed in Israel and one fell inside Lebanon.

The attack set off sirens in Kfar Giladi, Kiryat Shmona, and Tel Hai, near Israel’s northern border with Lebanon, and sent thousands running to their bomb shelters. There were no reports of casualties, but four people were treated for anxiety attacks. The rockets also sparked fires in Israel’s northern hillside and firefighters continued to battle the blazes early Thursday morning.

Israel told Lebanon through UN peacekeepers that it will intensify its response if calm is not restored to the border, according to Israel’s Channel 12 news. A Lebanese army official told AP the military had no comment pending investigations.

US State Department spokesman Ned Price condemned the rocket fire from Lebanon. “Israel has the right to defend itself against such attacks," he told reporters in Washington, adding that the US is engaged with partners “to de-escalate the situation.”

There have been similar incidents in recent months. Several rockets were fired at Israel last month and during the 11-day war with Gaza in May. The military determined that the rockets were fired by a Palestinian group in Lebanon and were not from Hezbollah.

Lebanon on Verge of Collapse

The rockets came as several thousand Lebanese marked the one-year anniversary of the horrific explosion at Beirut's port. The grim anniversary comes while Lebanon is on the verge of economic and political collapse.

The head of Lebanon's Maronite Catholic Church, Cardinal Bechara Rai, called for accountability for the explosion. Rai said, "We are here to demand truth and justice. This land will remain a stain until we know what happened in Beirut Port."

The catastrophic blast that tore through the city accelerated Lebanon's descent into a failed state, the worst crisis some say since the 19th Century.

Lebanon suffers from fuel shortages, power blackouts, lack of medical supplies and a financial crisis where the currency has lost most of its value. The country hasn't had a functioning government for months. Many blame a corrupt, dysfunctional political class for the crisis. The other culprit some say is the Islamic terrorist group Hezbollah, which is supported by Iran.

One Lebanese journalist called Hezbollah an occupying force of Iran and blamed the terror group for destroying what was once called the "Switzerland of the Middle East."

With Lebanon on the verge of collapse, Middle East analyst Jacques Neriah believes the country could be ripe for a takeover by Hezbollah.

"I think the only one who will be the winner is Hezbollah because economically, financially they are the best organized and they are assisted by Iran who just sends them millions of dollars to Hezbollah. And Hezbollah has already created a parallel state and it would take no time for Hezbollah to take over if such an instruction is being given by Tehran."

If Lebanon does collapse into a failed state, that would have disastrous consequences for Israel and the Middle East, including more attacks and warfare against Israel, giving Iran more power in the region.