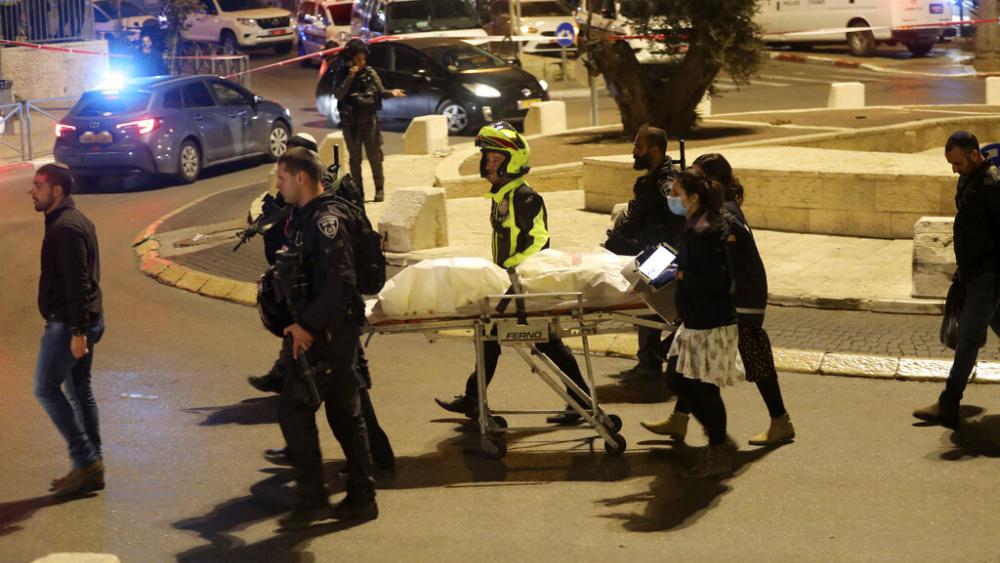 Israeli police men and paramedics carry the body of a man shot near Damascus Gate in the Old City of Jerusalem, Saturday, Dec. 4, 2021. (AP Photo/Mahmoud Illean)

JERUSALEM, Israel – An Israeli security guard was injured early Monday morning in a car-ramming attack at a checkpoint in the West Bank – biblical Judea and Samaria.

Security officials said the guard was hit by a vehicle driving from the Palestinian side around 1:30 am while working at the Te’enim checkpoint near the city of Tulkarem. Security forces shot the suspect on scene and he later died at a nearby hospital, Hebrew media reported.

“We arrived to find a man in his 30s from the security forces who had apparently been run over by a terrorist. We found him sprawled on the ground with extensive bruises all over his body. We treated him with bandages and evacuated him to Tel HaShomer Hospital,” an MDA spokesperson told Ynet news.

Earlier today, a Palestinian #terrorist stabbed a Jewish man in #Jerusalem solely on the basis of his Jewish identity, attempted to stab security forces and was then neutralized. We will not allow terrorism to run rampant in the streets of Jerusalem. We will protect our citizens. pic.twitter.com/5h7yn2V2Fx

After stabbing Elmaliah, Suliman then threatened two police officers responding to the terror attack. The police footage showed they did not immediately open fire on the suspect, but only did so after he repeatedly lunged at him. The officers were later questioned after widely circulated footage shot by a bystander appears to show them firing at the attacker after he was already lying on the ground. The Washington Post quoted Israeli Public Security Minister Omer Bar-Lev who said “two or three seconds” after initially shooting the assailant, “the police officers needed to decide if the injured terrorist would detonate an explosive device … When there’s a doubt, there’s no doubt."

The emergency service Magen David Adom reported Elmaliah was in moderate to severe condition and taken to a local hospital. Doctors said the stabbing came within an inch of his main artery.

20-year-old Avraham Elmaliah was stabbed by a Palestinian terrorist in Jerusalem on his way home from synagogue. According to the doctors, another inch and it would hit the main artery. No human being should be in danger simply because of who they are.#StandUpToHatred pic.twitter.com/5s0PZUU2Ea

Hamas praised the stabbing as a "new heroism." The incident divided Israeli lawmakers and leaders. Israeli Prime Minister Naftali Bennett commended the actions of the police but Joint List MK Aida Touma-Silman said the "execution of a person who no longer poses a threat is a horrible and terrible crime."

The officers are expected to be cleared without charges, according to Hebrew-language media reports.

On Friday, two Israeli officers were wounded in an alleged car-ramming attack in the Arab town of Umm al-Fahm in northern Israel. Police fatally shot the driver and wounded a passenger of a vehicle that was speeding towards them.

Police said the pair were suspected of involvement in violent family disputes that have rocked the Arab town in recent months. Authorities said the car-ramming was not politically motivated.