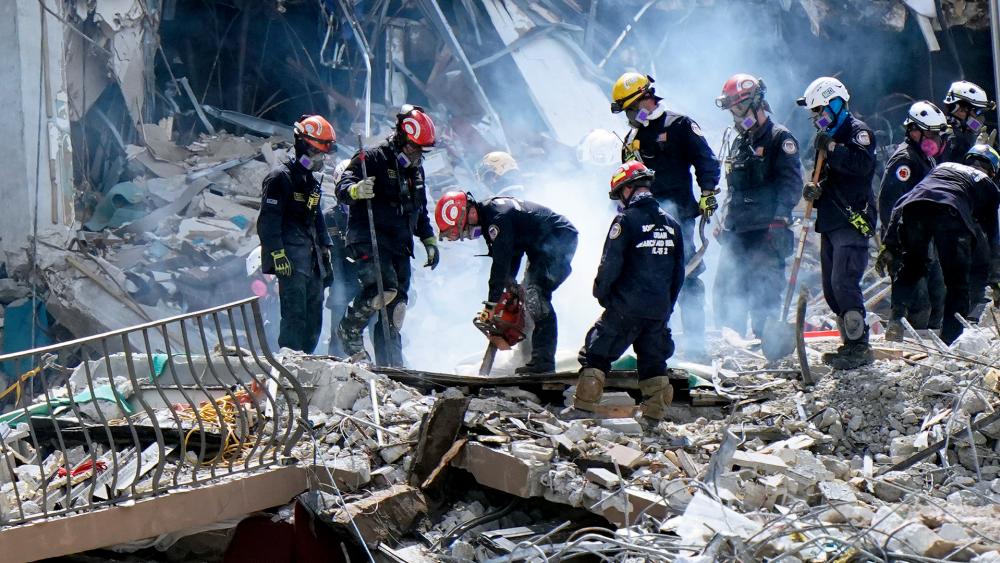 Crews work in the rubble at the Champlain Towers South Condo, Sunday, June 27, 2021, in Surfside, Fla. Many people were still unaccounted for after Thursday's fatal collapse. (AP Photo/Wilfredo Lee)

It was just 72 hours after the Champlain Towers South in Surfside, Florida, collapsed that a small team with the Israeli Defense Forces arrived on American soil to aid in what was — at the time — a search and rescue mission.

Lt. Col. Golan Vach, commander of the IDF’s National Rescue Unit, told The Palm Beach Post his “small and swift” team recovered the bodies of the majority of the 98 victims buried in the rubble of the collapse.

“You see a lot of death,” recalled Vach, who told the outlet he personally found 20 victims. “Some do not look like human beings. I tried to treat them as people, as souls, treat them as if they were my parents.”

#SurfsideBuildingCollapse utmost care not only to recover those still missing, family heirlooms and, as seen here, religious articles as well. Volumes of Gemara (Talmud) recovered by Com Golan Vach of the elite #IDF SAR 1, being treated with the utmost respect#SurfsideStrong pic.twitter.com/puS5gfxmOr

Vach said he and his fellow IDF members worked “like detectives,” explaining that he saw the wreckage from the June 24 collapse as a puzzle that needed to be solved in order to recover the lives lost.

The commander noted that his team boarded a commercial flight to the U.S. just hours after receiving approval to join in the effort. Although they weren’t scheduled to begin working until noon, he added, the IDF officers left the airport and headed straight to the condominium.

Because they were unable to obtain identifying information about the missing persons from state or county officials, Vach said the IDF team immediately began collecting whatever data they could from family members, many of whom were staying in the same hotel as them.

Vach explained that, rather than using traditional methods — like search dogs — to find missing persons, he and his fellow officers employed the help of those back in Israel, who developed 2-D and 3-D computer models of the collapsed condo to determine how the building fell and where there might be “voids” in the wreckage that could support life.

The result was a series of digital images that showed precisely where each room was located both before and after the collapse: red for bedrooms, blue for dining rooms, green for kitchens, yellow for corridors. A dark red triangle marked the spot where a victim should be found.

The team marked each column, each room, each floor in the pile. Orange spray paint and red brick — that was the ninth floor. Blue spray paint segregated the entire debris field into a grid.

The team created a “fragile reality,” calculating and mapping how far one victim might have landed from another. That way, rescuers could search with purpose, measuring out the distance and direction — 13 feet to the west, 33½ feet to the south, 29 feet to the east — from each victim to where another might be found.

As they recovered more and more bodies, the weight of their work was impacting the Good Samaritans with the IDF.

Some of Vach’s team really struggled.

“I say to them, ‘Hey, it’s OK. She was waiting for us for five days to be found. Treat her gently. Cover her with a blanket. One day, you will be the same,’” he said.

Maor Elbaz Starinsky, the consul general of Israel, noted that the sad reality is the reason the IDF rescue team is so skilled at what they do is because they have had ample opportunity to hone their methods.

“Unfortunately,” he said, “we have a lot of experience with disasters. Israeli towns and cities and population centers have become the new front for the war zone in the Middle East. … So our military and authorities have developed very advanced techniques that are useful in territories other than war zones.”