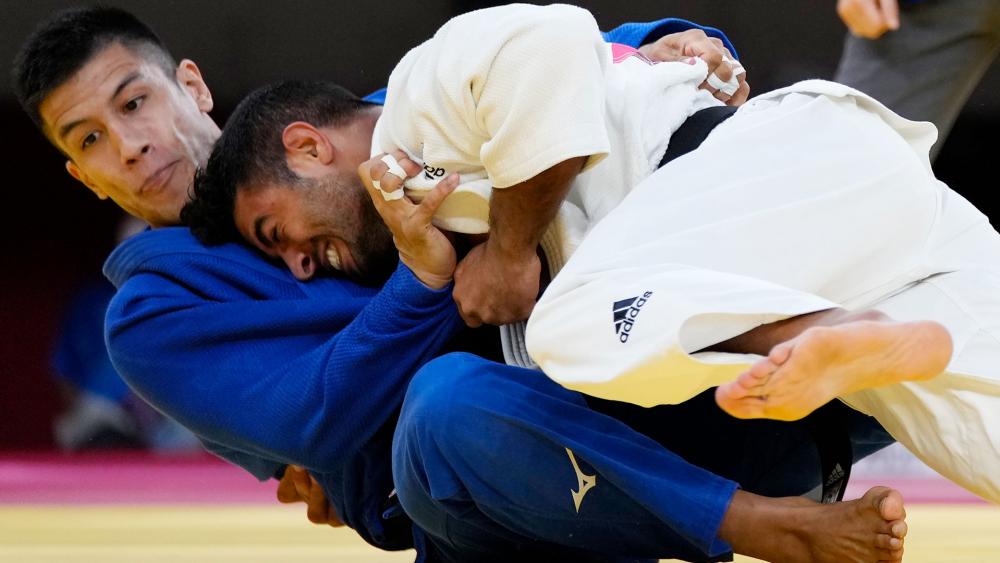 Sagi Muki of Israel, right, and Eduardo Yudy Santos of Brazil compete during the men -81kg elimination round of the judo match at the 2020 Summer Olympics in Tokyo, Japan, Tuesday, July 27, 2021. (AP Photo/Vincent Thian)

TOKYO (AP) — Tohar Butbul could only shake his head in resignation after the Israeli judo star's first two potential opponents dropped out of the Tokyo Olympics shortly before they would have faced him.

“These are things that sometimes occur in judo, so it wasn’t that odd for me,” Butbul said through a translator. “I just had to wait, stay focused and wait for my first chance.”

Algeria's Fetih Nourine withdrew from the Games on Saturday when he learned he would meet Butbul if he advanced to the second round Monday, explicitly citing his support for Palestinians for his decision.

On Monday, Sudan's Mohamed Abdalrasool didn’t show up to face Butbul in their round of 32 bout despite weighing in earlier.

Abdalrasool didn't make a public statement about his decision, but Butbul said his team was told Abdalrasool had a shoulder injury — a reason that didn't exactly convince Butbul or the Israeli team.

Nourine and his coach were swiftly suspended by the International Judo Federation last weekend. The Algerian Olympic committee withdrew both men’s accreditations and made plans to send them home.

The IJF didn't comment on Abdalrasool's withdrawal after sharply criticizing Nourine, who also quit the World Judo Championships in 2019 right before he was scheduled to face Butbul at the Budokan, the site of the Tokyo Olympics.

Butbul is ranked seventh in the world at lightweight. He likely would have manhandled Nourine, who is ranked 31st, or Abdalrasool, who is 469th and only got into the Olympics through a late invitation.

With an unimpeded path to the round of 16, Butbul beat Victor Sterpu of Moldova and advanced to the quarterfinals against South Korean star An Changrim, who beat him with a waza ari.

Butbul then lost to Arthur Margelidon of Canada in repechage, ending his first Olympics effectively in seventh place.

Butbul refused to talk about politics after his eventful day, instead lamenting his athletic shortcomings.

“I came with a pure aim to win a medal, and it’s very hard for me to bear that I didn’t fulfill my own expectations,” Butbul said. “That was the goal I put into the whole of my career. It’s still too early for me to understand what happened. I wasn’t precise in executing my plan, but in judo sometimes there is a gap between how you plan and what is in reality.”

The governing body of judo has been firm in its antidiscrimination policies and strong support of Israel’s right to compete in recent years.

In April, the IJF suspended Iran for four years because the nation refused to allow its fighters to face Israelis. The IJF said Iran’s policies were revealed when former Iranian judoka Saeid Mollaei claimed he was ordered to lose in the semifinals of the 2019 world championships in Tokyo to avoid potentially facing Israeli world champion Sagi Muki in the finals.

Butbul's teammate, Timna Nelson Levy, also fell just short of a medal, losing to Tsukasa Yoshida of Japan in the quarterfinals and losing her repechage bout to Kaja Kajzer of Slovenia.

Israel has won 10 medals, half of them in judo, in its Olympic history.