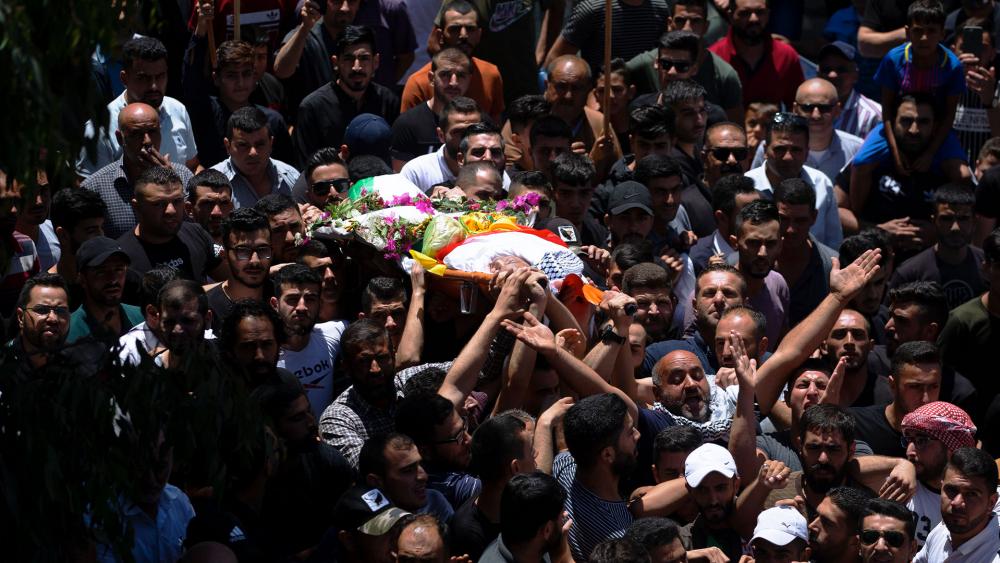 Palestinians carry the body of Mohammed al-Alami, 12, during his funeral in the village of Beit Ummar, Thursday, July 29, 2021. (AP Photo/Majdi Mohammed)

JERUSALEM, Israel - Israeli troops shot and killed a 20-year-old Palestinian man on Thursday during a funeral for a boy killed by Israeli soldiers the previous day, Palestinian health officials said.

The incident took place in Beit Ummar, a town near the city of Hebron in the West Bank — biblical Judea and Samaria.

Shawkat Khalil Awad, 20, was shot in the head and stomach amid clashes during the burial of 12-year-old Mohammad al-Alaama, who residents say was killed by Israeli troops while riding in a car with his father near the entrance of the town Wednesday evening.

Awad is the fourth Palestinian to die this week during confrontations with Israeli troops, according to the Palestinian Authority.

The Israeli military has not commented on Awad’s death, but said it launched an investigation into potential misconduct in the death of 12-year-old al-Alaama.

According to the boy’s father, Muayyad Bahjat, he went to a local store Wednesday night with his three children to buy groceries.

He had just returned home when al-Alaama told his father they had forgotten something at the store.

“I reversed the car, turned around, and started driving — and there was suddenly intense gunfire in our direction. I yelled to my children to put their heads down so they wouldn’t get hurt. I took the car forward a little,” Muayyad told The Times of Israel.

Following Wednesday night’s shooting, the Israeli military confirmed it had shot live fire at the car.

According to the military, soldiers near the town saw several Palestinians digging near a border post before getting in a car and leaving. When troops went to investigate the area, they found the body of a day-old baby girl in a plastic bag.

Not long after, the soldiers spotted a car. Suspecting it was the one used by the Palestinians who buried the girl, they tried to stop and arrest its passengers, the military said.

“The soldiers initiated the suspect arrest procedure, which included calls [in their direction] and shooting in the air. When the vehicle did not stop, one of the soldiers fired at the wheels of the vehicle in order to stop it,” a spokesperson for the military said.

Although the military said it only fired at the car’s wheels, Israeli media reported that there were bullet holes in the car’s body and the windows were smashed.

Residents of the town told the Times they had indeed buried the body of a still born baby girl near the military post instead of the town’s main cemetery.

The investigation into al-Alaama’s death is ongoing. His father will likely lose his work permit in Israel because according to Israeli policy, the relatives of Palestinians shot by Israeli police are more likely to commit terror attacks.