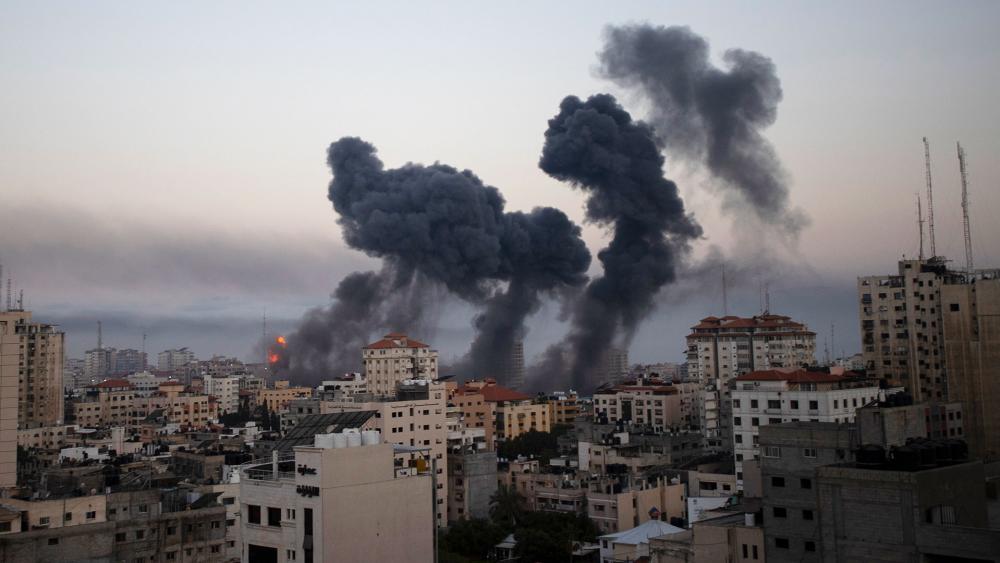 JERUSALEM, Israel - Sirens blared, the ground shook, and many people in central and southern Israel spent the night in bomb shelters as rockets launched by terror groups in Gaza rained down nonstop overnight.

The Hamas terror group blitzed central Israel with what appeared to be the largest-ever rocket attack on Tel Aviv and surrounding areas. The barrages of rockets forced Israel to briefly suspend flights from its nearby Ben Gurion International Airport and divert flights to Cyprus. The Israeli military ordered all residents in central and southern Israel to stay in bomb shelters and authorities ordered schools south of Herzliya to close.

At least five Israelis, including three women and a child, were killed by rocket fire Tuesday and early Wednesday. Dozens more are injured across central and southern Israel. Gaza terrorists have fired more than 1,000 rockets at Israel since Monday night, according to the Israeli military.

VIDEO: Footage of the moment of impact of a rocket in Holon. #PrayForIsrael #IsraelUnderFirepic.twitter.com/aA6ZVxFRos

An Israeli firefighter works at the site where a rocket fired from the Gaza Strip, hit the central Israeli town of Holon, near Tel Aviv, Tuesday, May 11, 2021. (AP Photo/Heidi Levine)

One rocket landed on an oil pipeline in the southern city of Ashkelon, sparking a massive blaze. As rockets shot into the sky, mosques across Gaza blared with chants of “Allah is great,” “victory to Islam” and “resistance.”

Israel has responded to the rocket attacks by pounding more than 500 terror targets in the Hamas-controlled Gaza Strip. There, at least 35 Palestinians, including 10 children have been killed in the fighting, according to the Health Ministry. More than 200 people are wounded. Israel says most of the dead are Palestinian terrorists. 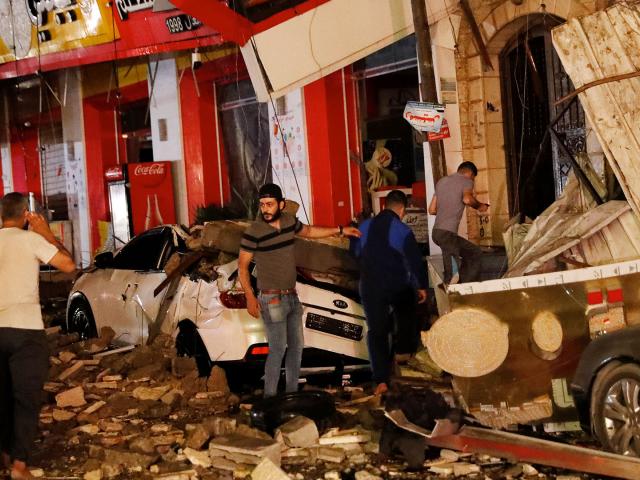 Youths inspect destroyed buildings after it was hit by Israeli airstrikes, in Gaza City, early Wednesday, May 12, 2021. (AP Photo/Adel Hana)

This is the heaviest fighting between Gaza terror groups and Israel since 2014, and it shows no signs of slowing.

Israeli Prime Minister Benjamin Netanyahu vowed to expand the offensive, dubbed by Israel as Operation “Guardian of the Walls.”

“This campaign will take time, but we will restore security to the people of Israel,” Netanyahu said.

Israel’s military said top terror leaders have been killed during air raids and a high-rise building housing Hamas offices was reduced to a pile of rubble.

“Towers will continue to crumble, There are a lot of targets in line. This is just the beginning,” Defense Minister Benny Gantz said. Gantz ordered the mobilization of 5,000 Israeli reserve troops to expand Israel’s operation.

IDF Chief of Staff Aviv Kochavi warned terror groups in Gaza that they “will pay an even heavier price than they have already paid.”

“We are ready for this battle,” he added.

Violence Across the Holy Land

The unrest spilled over to other areas, where demonstrations by Arab Israelis turned to riots overnight while rockets simultaneously rained down. Protesters set dozens of vehicles on fire in confrontations with police. The Israeli government declared a state of emergency in the mixed Jewish-Arab city of Lod, where rioters reportedly set synagogues and stores on fire. Israel’s Channel 12 News showed footage of Jewish residents of Lod hurling rocks at Arab cars.

Lod’s mayor, Yair Revivo, compared the event to the Nazis’ 1938 Kristallnacht pogrom and said “civil war” is breaking out in a city where people have spent decades trying to promote coexistence between Jews and Arabs. 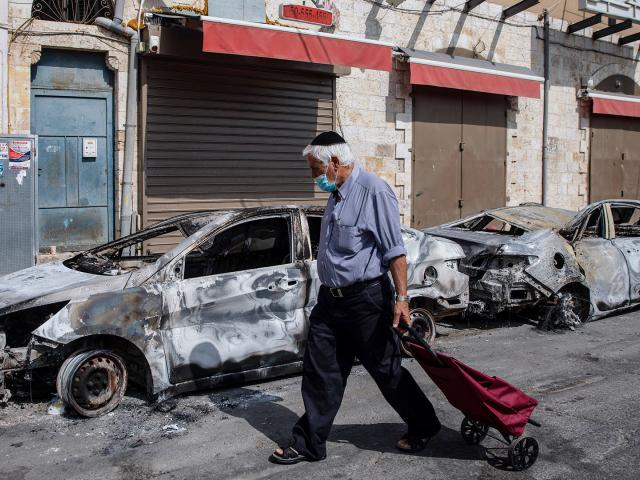 A man passes by cars torched after a night of violence between Israeli Arab protesters and Israeli police in the mixed Arab-Jewish town of Lod, central Israel, Tuesday, May 11, 2021. (AP Photo/Heidi Levine)

“We are seeing a situation in the mixed [Jewish-Arab] cities that we have never seen before,” he said. Just one day earlier, an Arab man was killed during the violence in Lod.

“I ask you all to assume responsibility, act with wisdom, abide by public order and the law, and preserve your life and the lives of all citizens without exception,” said Mansour Abbas, leader of Israel’s Islamist Ra’am party.

A Tinderbox of Tensions Explodes

This recent bloodshed follows weeks of rising tensions between Israelis and Palestinians. It has coincided with the Muslim holy month of Ramadan, a time of heightened religious sentiments and calls for jihad by extremist Muslims. Leading up to the attacks, there were nightly clashes between Israeli police and Arabs in Jerusalem’s Old City, where critics say heavy-handed Israeli police measures stoked unrest. Israel says the police were responding harshly to Palestinian agitators and rioters in the Holy City.

Another flashpoint of violence has been the neighborhood of Sheikh Jarrah in eastern Jerusalem, where a looming court decision threatens to evict dozens of Palestinians who have lived there for decades. The Israelis at the center of the legal dispute argue the Palestinians should leave their homes in Sheikh Jarrah because the neighborhood was inhabited by Jews before Israel became a state. Both sides accuse each other of fueling the legal dispute with their own nationalist ideologies.

Even more violence broke out over the weekend and earlier this week at the Al-Aqsa mosque complex on the Temple Mount. For days, Palestinian worshippers hurled stones and chairs at Israeli forces as police fired tear gas and stun grenades to quell the riots.

On Monday evening, Hamas began firing rockets from Gaza. From there on, the conflict has only escalated.

The United States has expressed steadfast support for Israel and called for a swift end to the violence.

“Israel’s security, for its legitimate right to defend itself and its people, is fundamental and will never waver,” White House spokeswoman Jen Psaki said. 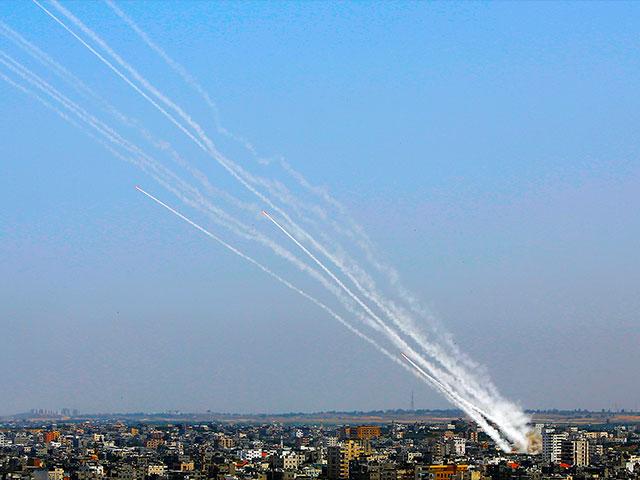