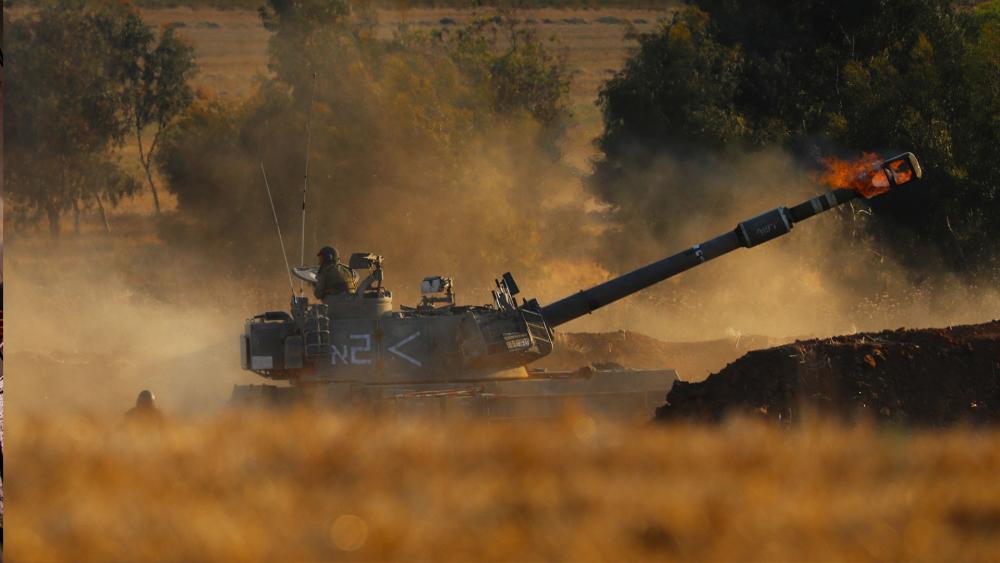 An Israeli artillery unit fires toward targets in Gaza Strip, at the Israeli Gaza border, Thursday, May 13, 2021. (AP Photo/Ariel Schalit)
6254214640001
Israel Prepares for Possible Ground Invasion in Gaza 'At Any Given Moment' as War Rages On

JERUSALEM, Israel – The fighting between Israel and Gaza continued Friday with no signs of stopping. Israel is amassing thousands of troops along the Gaza border ahead of a possible ground invasion into the Hamas-controlled territory.

The military called up an additional 9,000 reservists to the Gaza frontier Thursday evening, a major signal that the conflict is escalating despite efforts by Egyptian mediators to broker a ceasefire.

Brig. Gen. Hidai Zilberman said tanks, armored vehicles, and artillery were being prepared “for mobilization at any given moment.”

Early Friday, Israel said air and ground troops struck Gaza in what appears to be the biggest attack yet. The IDF later clarified that it had not launched a ground invasion, but the option is still on the table.

“I said we would extract a very heavy price from Hamas," Prime Minister Benjamin Netanyahu said in a videotaped statement. "We are doing that, and we will continue to do that with heavy force.” 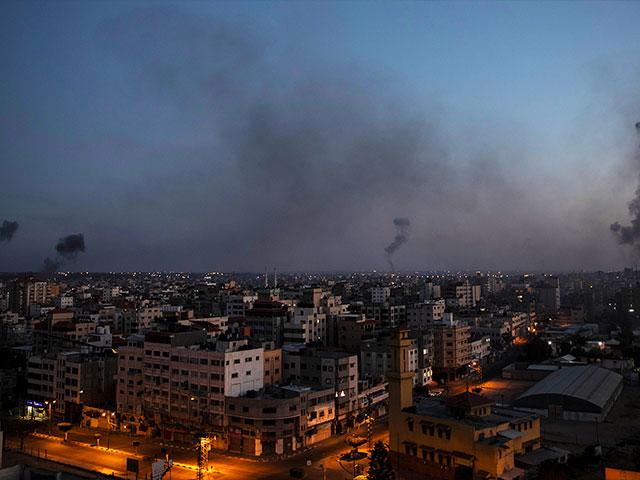 Following the Israeli attack, Hamas fired waves of rockets into southern and central Israel. Gaza terrorists have fired nearly 2,000 rockets and mortars into Israel since Monday, including a rare rocket attack on Jerusalem and several barrages targeting Tel Aviv.

"We are being attacked, rockets are being fired at us without notice. Rockets are fired at me with no notice,” Ya'akov Abdu, a resident of the city of Ashkelon, told The Associated Press.

“It was extremely scary. We heard booms and explosions. We weren't sure if missiles were falling or if it was the Iron Dome intercepting their rockets,” said Tel Aviv resident Giordana Grego. 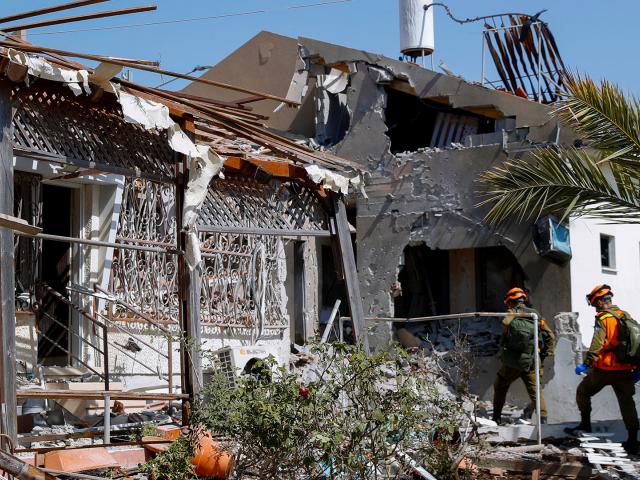 Israeli soldiers inspect a house damaged by a missile fired from the Gaza Strip, in the southern Israeli city of Ashkelon, Tuesday, May 11, 2021. (AP Photo/Ariel Schalit)

Israel’s military says its Iron Dome system has intercepted about 90% of the rockets so far.

Earlier in the day, Hamas launched nonstop rounds of rockets into southern Israel, disrupting flight traffic at the country’s Ramon airport. Hamas also launched a drone that Israel said it shot down. A Palestinian terror group is suspected of launching three rockets from Lebanon, which landed off the coast of northern Israel Thursday evening.

The Israeli military has retaliated against Gaza’s attacks by bombing about 600 targets in the coastal enclave.

Gaza’s Health Ministry said the death toll has risen to 119 Palestinians, including 28 children.

"Most of the injuries coming to Shifa, the largest hospital in Gaza are serious, including women and children and old, from all age groups. Mostly shrapnel wounds all over the body, there were also children who had legs or arms amputated, let alone those who came torn apart,” Dr. Mohammad Abu Selmia, director of Shifa Hospital told AP. 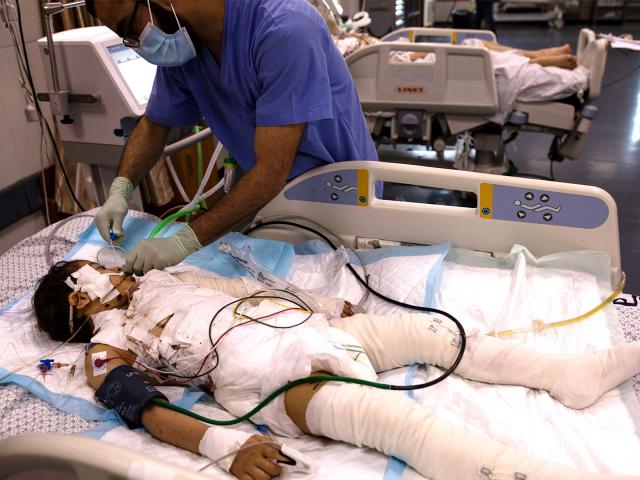 A Palestinian medic gives treatment to a wounded girl in the ICU of the Shifa hospital, Thursday, May 13, 2021, in Gaza City.

Gaza resident Sadallah Tanani said his family was “wiped out from the population register” during an Israeli strike on a building in the northern Gaza Strip. “It was a massacre. My feelings are indescribable,” he said.

Israel maintains that most of the dead are terrorists and that a few died from errant rockets that accidentally landed in Gaza. Israel says it is also employing a tactic they’ve used in previous conflicts with terror groups inside the Gaza Strip. It’s called “roof knocking.” Israel first drops a non-explosive device on the roof of a building they plan to bomb so residents can flee and get out of harm’s way. The Israeli-run Palestinian Media Watch showed an exclusive clip where a Palestinian TV reporter recounts how the IDF warned everyone in this tower to evacuate before the attack. 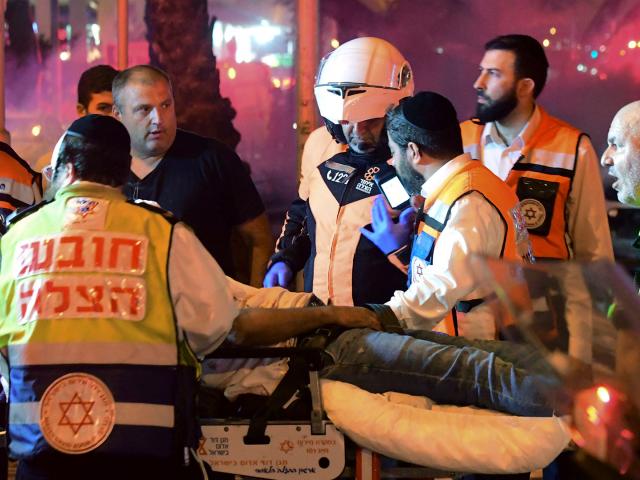 Israeli medics evacuate a wounded man after a rocket fired from the Gaza Strip hit the central Israeli town of Holon, near Tel Aviv, Tuesday, May 11, 2021. (AP Photo/Avshalom Sassoni)

Nine people have been killed in Israel, including a 6-year-old boy.

“I don’t understand how something like this happened,” the boy’s father, Asaf Avigal, told Israel’s Channel 13. “I can’t believe my son died. What a disaster.”

He loved the Ninja Turtles, his parents, and life.

Yesterday, Ido was killed when a rocket from Gaza struck his home in Israel. He was only 6 years old.

May his memory be a blessing. pic.twitter.com/UHmjglaJzQ

International critics have condemned Israel for civilian casualties in the Gaza fighting. Israel blames Hamas and says the terror group is responsible for endangering civilians by hiding weapons in civilian areas.

Back in Washington, President Joe Biden has shown steadfast support for Israel’s right to defend itself. He spoke with Netanyahu about the violence, but also said “there has not been a significant overreaction.”

He said the goal is to “get to a point where there is a significant reduction in attacks, particularly rocket attacks that are indiscriminately fired into population centers.” He called the effort “a work in progress.”

Egypt, which often serves as the mediator between Israel and Hamas, stepped up its cease-fire efforts to no avail on Thursday. The Egyptian officials met with Hamas leaders in Gaza before holding meetings with Israeli leaders in Tel Aviv, but both sides have shown little interest in backing down.

Israel is fighting a war on two fronts: an external war with Gaza and an internal war between Jews and Arabs who are battling each other in the streets.

Israeli President Reuven Rivlin said the country is in the middle of “a civil war” as Jews and Arabs brutally beat each other in the worst outbreak of Jewish-Arab violence inside Israel in decades.

For a fourth consecutive night, Jewish and Arab mobs unleashed their wrath on each other in the central city of Lod. Two Jewish men were shot and wounded Thursday night, Israeli media reported. Just days earlier, an Arab man was shot and killed during the clashes.

The mayor of the Israeli city of Lod, a mixed Arab/Jewish city southeast of Tel Aviv, just said on live TV “We have completely lost control of the city, and the streets are witnessing a civil war between Arabs and Jews."
pic.twitter.com/GeFd1eH4yb

Extremist Arab mobs have hurled rocks and set synagogues on fire in Lod.

"They almost managed to break in, but at the last minute (the rescue) forces arrived," Lod resident Avraham Sagron said as he described an attack on a local synagogue. "The entire ceiling is covered in black, all with soot, and over here was the women's section with holy books - everything was set on fire."

Islamic expert Dr. Mordecai Kedar sees a religious element to the Arab riots: "It is a religious war when rioters in the Israeli cities of Jerusalem, Lod, Jaffa and Acre, among many other localities, unite around such jihadist slogans as “Khyber, Khyber Oh Jews, the army of Muhammad will return,” evoking the slaughter of all men of this ancient Jewish community and the enslavement of their women by Islam’s founder.”

Joana Nasser, the Arab co-owner of a popular ice cream shop in Bat Yam, said Thursday she had been living in the neighborhood "for years" and never expected her store to be attacked.

"A lot of people supported us, but even so they did it, because we speak Arabic. We are not bad people, we did nothing, we never hurt anyone," she told AP.

"It's really difficult, both sides are hurting. If someone from this side is killed it hurts, and also from the other side. We are all human beings, we all feel," she added.

“The person who is responsible for this Intifada is Itamar Ben Gvir,” Shabtai told Netanyahu, Channel 12 reports. “It started with the Lehava protest at Damascus Gate…It continued with provocations in Sheikh Jarrah, and now he is moving around with Lehava activists.” Lehava is a widely condemned Jewish supremacist group that opposes intermingling between Jews and non-Jews and frequently chants “death to Arabs” at nationalist rallies.

The violence is condemned by both Jewish and Israeli leaders. Meanwhile, peaceful Jews and Arabs have held joint rallies around the country calling for an end to the violence.

The fighting has deepened a political crisis that sent Israelis to the polls four times in just two years. After the fourth inconclusive election in March, Netanyahu failed to form a governing coalition. Now, his political opponents have three weeks to cobble one together.

His opponents are a wide range of parties from the political right, left, and center who have little in common. They need the support of the Islamist Ra’am Party to form a government, but its leader has suspended all negotiations while Israel is fighting with Gaza.

Naftali Bennett, leader of the right-wing Yamina Party, reportedly said he did not believe an alternate government can be formed amid the fighting and internal division. Opposition leader Yair Lapid, who is leading the coalition-building efforts, urged Bennett to join him rescue the country.

“We are on the brink of the abyss,” he said.

If Netanyahu’s political rivals also fail to form a government coalition, Israel could head to the polls for a fifth consecutive election in the fall. 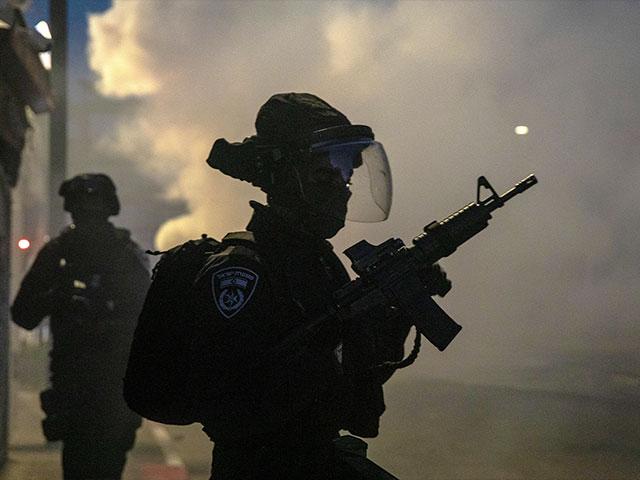 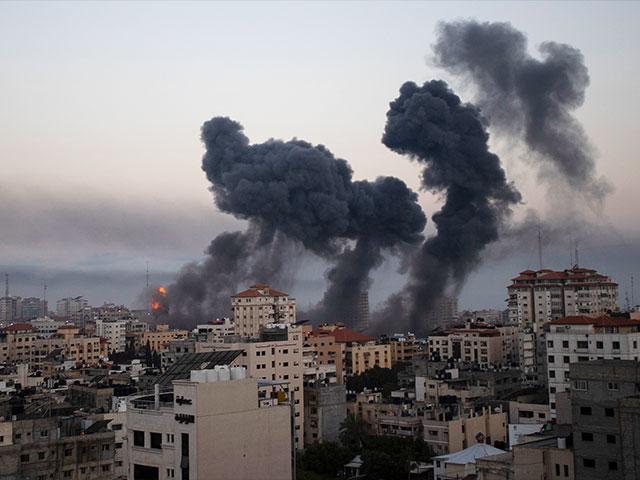