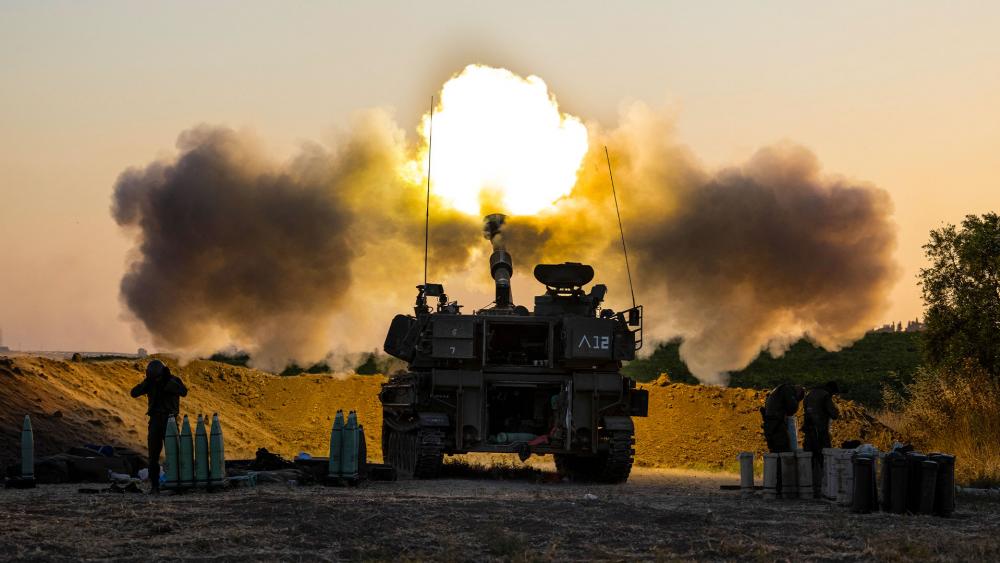 In this May 19, 2021, file photo, an Israeli artillery unit fires shells towards targets in Gaza Strip, at the Israeli Gaza border. (AP Photo/Tsafrir Abayov, File)

JERUSALEM, Israel – Israel and the Palestinian terror group Hamas may reach a ceasefire as early as Friday, the Wall Street Journal reports.

Egyptian mediators have reportedly made progress in negotiations with Hamas and Israel, and the Israeli military has “privately conceded” that it is close to finishing its military operations in the Gaza Strip, the report said, citing US and foreign officials. The White House declined to comment.

The US, Qatar, Egypt, and several European nations have been pressuring Israel and Hamas to bring an end to their worst round of fighting since 2014. Despite reports of an impending ceasefire, the situation is very fragile and there are concerns that members of another Gaza-based terror group, Palestinian Islamic Jihad, will remain a “wild card.” The group could escalate the situation even after the two sides agree to a ceasefire, a US official told WSJ.

Israel is continuing its campaign against Hamas amid rocket fire from Gaza terrorists. Israel said it bombed targets throughout the Gaza Strip overnight and Thursday after Prime Minister Benjamin Netanyahu said the military operation would push ahead despite international pressure for a ceasefire.

Israel’s military believes the Hamas terror group is “trying to have a major success” it can hold up as a victory over Israel before the fighting ends, The Times of Israel reported.

A senior officer in the military’s Southern Command told reporters Hamas may be considering a cross-border attack or another major assault against Israel.

“I don’t think Hamas can do a major surprise ground operation, but it could do a raid,” he said, speaking on condition of anonymity. 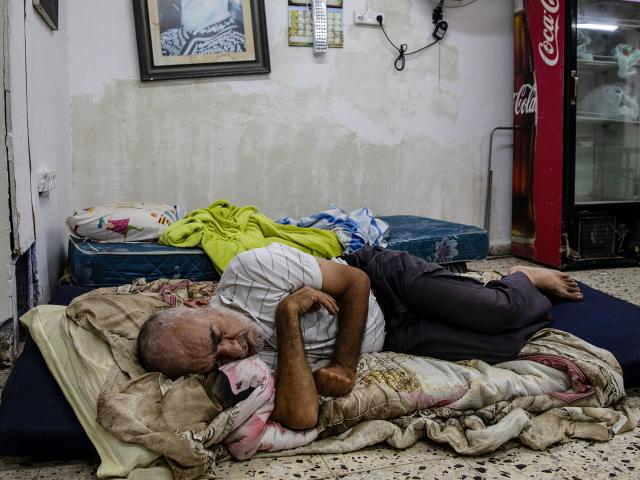 Daniel Turjman, 60, rest in a bomb shelter that is also used as a synagogue nearby his apartment building in Ashdod, Israel, Wednesday, May 19, 2021. (AP Photo/Heidi Levine)

Netanyahu told foreign ambassadors on Wednesday that Israel is in no rush to end its campaign against Hamas targets in the Gaza Strip.

“We’re not standing with a stopwatch. We are taking care of the operation’s objectives,” he said.

Hamas said Wednesday it could reach a ceasefire within the next 24 to 48 hours, but warned that Israel’s continued airstrikes on the coastal enclave would mean more rockets on Israeli civilians.

“We were clear from the start: bombardment for bombardment…escalation for escalation,” Hamas official Moussa Abu Marzouk told the Lebanese Al-Mayadeen network.

Biden told Netanyahu in a telephone call Wednesday that he expected “significant de-escalation” of the fighting by day's end, according to the White House.

But in the moment of public tension, Netanyahu rebuffed Biden’s call for de-escalation and said he was “determined to continue” the Gaza campaign. He added that he “greatly appreciates” Biden’s support.

Although Biden has called for an end to the violence in phone conversations with Netanyahu, he has avoided publicly pressing Israel for an immediate ceasefire. Instead, his strategy is behind-the-scenes diplomatic pressure. 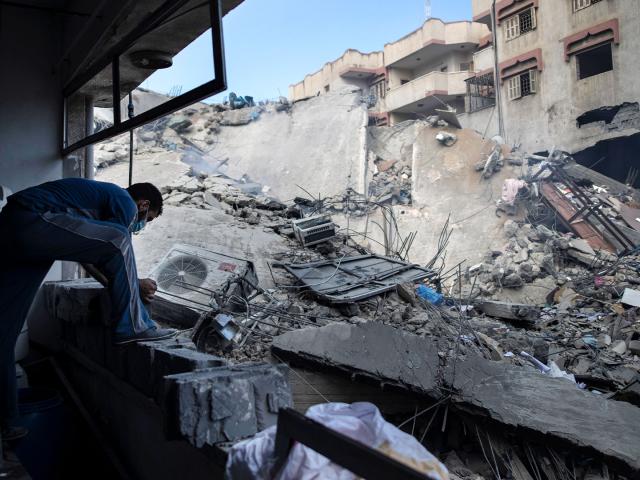 A Palestinian man inspects the damage of a six-story building which was destroyed by an early morning Israeli airstrike, in Gaza City, Tuesday, May 18, 2021.

Democratic Party leadership has publicly supported Israel's right to defend itself and praised the US-Israel friendship. But the administration’s handling of the conflict reveals a widening divide between Biden and some Democratic lawmakers.

Rep. Alexandria Ocasio-Cortez of New York has called Israel an “apartheid state,” and Rep. Ilhan Omar of Minnesota has characterized Israeli airstrikes as “terrorism." Rep. Rashida Tlaib of Michigan, who has Palestinian family members in the West Bank, told Biden he must do more to protect Palestinian lives.

Tlaib, Ocasio-Cortez, and Rep. Mark Pocan of Wisconsin introduced a resolution on Wednesday opposing the sale of $735 million in military weaponry to Israel that was already approved by the Biden administration before the fighting began. The resolution is unlikely to pass in the House.

"Israel needs our support now more than ever,” said Rep. Doug Lamborn of Colorado. “Unfortunately, there are those in Congress who are wanting to defund our military support of Israel. They're wanting to condemn Israel's right to defend itself. And that is totally wrong. And we're not going to let that happen."

Israel’s war with Gaza is the worst round of violence since 2014. At least 219 Palestinians have been killed and 12 people in Israel.

Israel claims most of the dead are Palestinian terrorists. Israel says it does not target civilians, but instead warns them before it attacks, and that some of the civilians died from errant rockets that accidentally fell in the Gaza Strip. 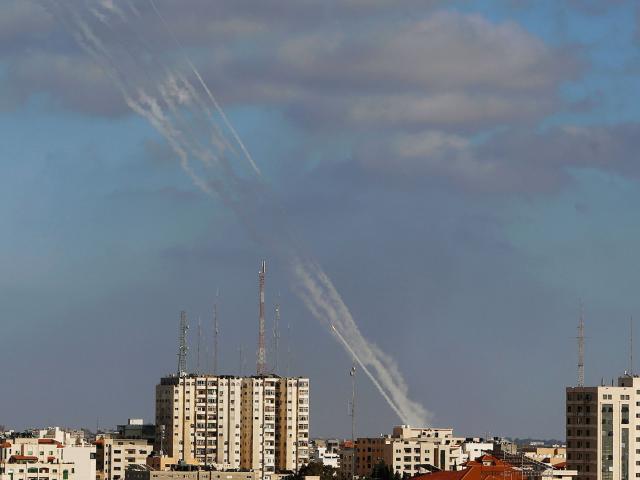 Rockets are launched from the Gaza Strip to Israel, Monday, May 17, 2021. (AP Photo/Hatem Moussa)

However, Israeli military leaders have admitted that their airstrikes targeting what it says are Hamas terror tunnels have led to “unfortunate unintended civilian casualties.”

Terrorists in Gaza have fired more than 4,000 rockets at Israel in just under two weeks. Israel says its Iron Dome missile defense system has intercepted about 90% of those rockets. 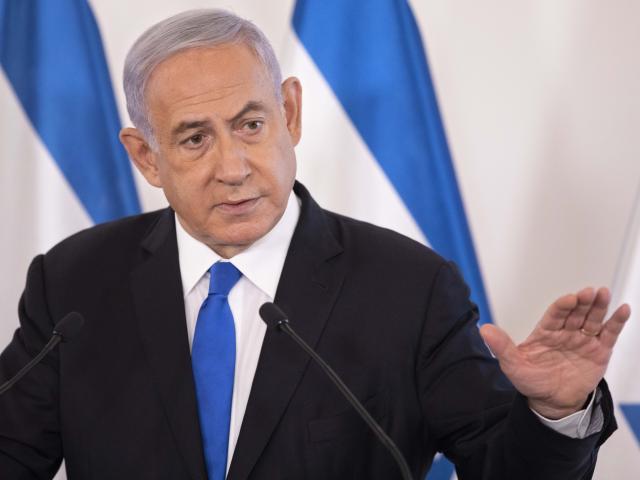