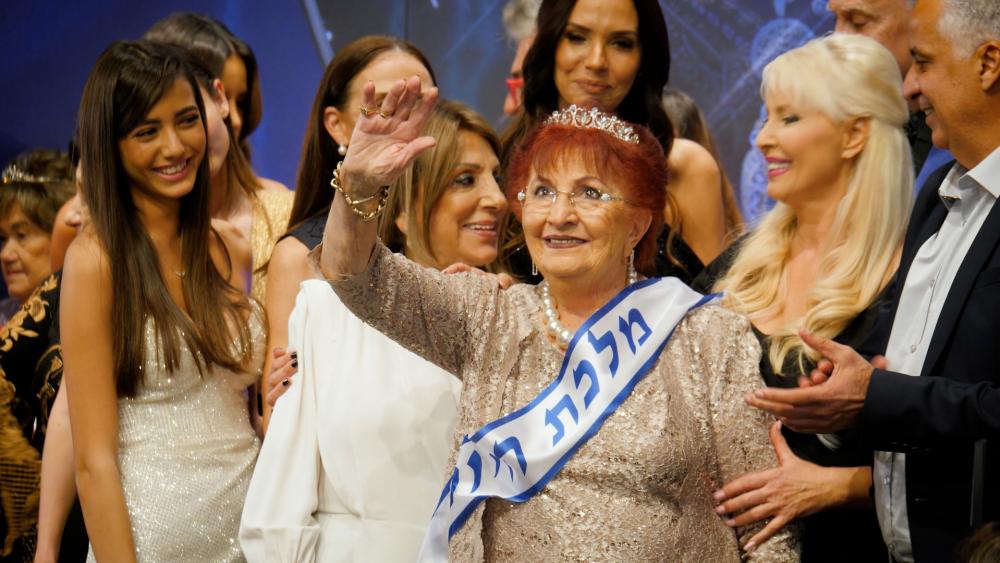 While the COVID-19 pandemic put the pageant on hold, it made a comeback and crowned Salima Steinfeld, 86, as this year’s winner.

The pageant celebrated the women who not only survived the horrors of the Holocaust but passed on a legacy of life and hope to future generations.

MC Moran Atias described the event as “the most beautiful evening I’ve had in a really long time.”

“We [shared how] our inner beauty surpasses our outer beauty. It’s true tonight. Their stories, their heritages, their choice of choosing life and celebrating it is an example we should all learn from. I feel like the winner tonight,” said Atias.

The Friends of Zion Museum hosted the pageant in Jerusalem.

“These precious little girls never gave up hope. They kept the light alive inside of them and this is to inspire hurting, human beings,” said FOZ Founder Mike Evans. “These holocaust survivors…their parents weren’t killed over land. They were killed because they were Jews. This inspires the younger generation, but it also gives them optimism.”

The beauties of today honored the survivors of yesterday.

“I really think it sends a message of hope because women can see that beauty has no age and no matter when, you’re always beautiful,” said Miss Israel 2021 Noa Kochba.

Organizers hosted the contestants for several days and professional makeup artists pampered the survivors. To them, it was like a dream.

“Crazy, like in a movie,” said one survivor named Hedva. “Everything is crazy. I don't believe it's true.”

Koka, another contestant, said it was “very exciting” to share her story “to all the people in the world.”

The survivors got to tell their stories during the broadcast seen in several countries, online and covered by dozens of media outlets.

“I remember everything as if I can see it now. They expelled us from the village, and we went on death marches, thousands and thousands of people,” said one contestant.

Another described the day the Germans took her father to a concentration camp.

“That was the worst possible camp. I had typhus and they sent my mother and me to a partisan hospital in the woods, but there was snow, and we didn’t have shoes, we went on foot. I had a fever of 40 degrees we walked in the snow,” she said.

“We were four siblings in the family and my father was taken to hard labor. My mother raised us in ditches, where there was a lot of lice and we cried day and night because we had nothing to eat. I don’t want to start talking because I start to cry," another survivor said.

They survived the horrors and raised up another generation.

Lea Schenirer’s mother was a twin who survived the gruesome experiments by the infamous Dr. Josef Mengele at Auschwitz.

“I was born as a miracle. Because nobody knew at that time what Mengele put in their bodies, what injections. So that she gave birth to a healthy child… that’s a miracle. That’s a miracle,” said Schenirer.

Hedva’s family was rescued by Swedish diplomat Raoul Wallenberg who saved hundreds of Jews by passing out visas.

Hedva’s makeup artist at the pageant happens to be related to Wallenberg.

“I spoke about Wallenberg, that he saved me. She said, ‘I am family of Wallenberg, crazy.’ And she is a family of Raoul Wallenberg. She lives in Haifa … I don't believe; it's like a movie, a real movie, life movie,” said Hedva.

Many of the survivors thanked God.

“There is a God in Heaven and he protected me,” one survivor said. God helped me and I was fortunate I’m in the Holy Land, in Israel.”

Some felt the survivors reflected the words of the Prophet Isaiah who wrote: “To give them beauty for ashes, the oil of joy for mourning, the garment of praise for the spirit of heaviness; that they may be called trees of righteousness, the planting of the lord, that he may be glorified.”

Koka says it’s important for people to remember the Holocaust, and that she forgives the perpetrators but doesn’t forget what happened.

Schenirer served as one of the judges.