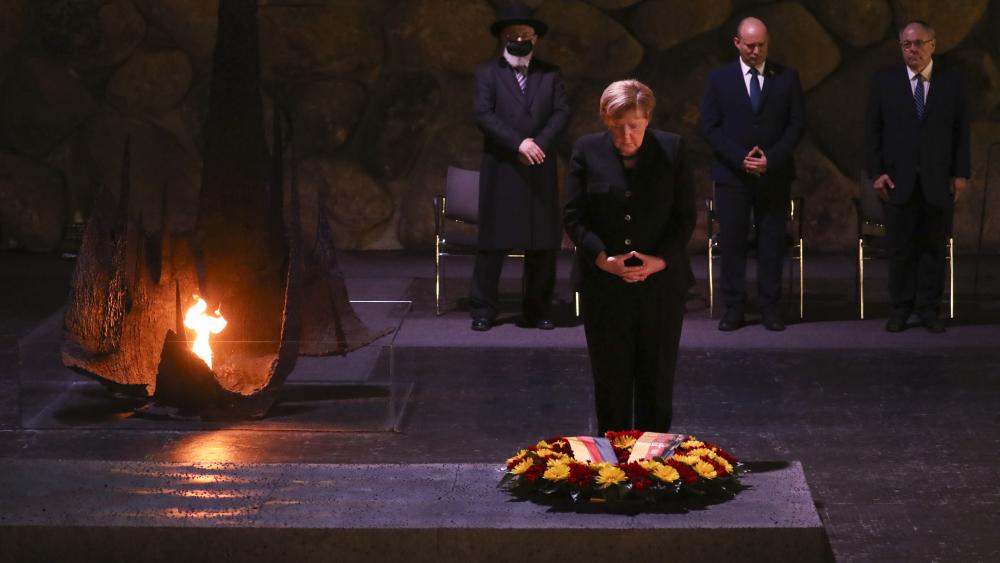 JERUSALEM, Israel – Outgoing German Chancellor Angela Merkel is in Israel this week for her farewell visit to the Jewish State.

On Sunday, Merkel laid a wreath at Jerusalem’s Yad Vashem Holocaust memorial and urged the world to fight against anti-Semitism.

"Every visit to Yad Vashem touches me at the core,” she said. “The crimes against the Jewish people that are documented here are a perpetuate reminder of the responsibility we Germans bear and a warning.”

Nazi Germany and its collaborators murdered 6 million Jews in the Holocaust.

The chancellor promised to "stand up with determination against anti-Semitism, hatred, and violence every day anew," adding that it is an obligation "for every federal government."

Merkel said it is “moving” that Israel eventually came to trust Germany following the Holocaust and that her country remains committed to Israel’s security.

“I want to use this opportunity to emphasize that the topic of Israel’s security will always be of central importance and a central topic for every German government,” she vowed.

Israeli Prime Minister Naftali Bennett described Merkel as “Europe’s moral compass” and credited her with forming an unwavering bond between Germany and the Jewish State.

The two leaders held a joint press conference earlier on Sunday, where differences quickly emerged between the two allies over the Iranian nuclear deal and Palestinian statehood.

"I never considered the Joint Comprehensive Plan of Action (JCPOA) to be ideal, but it's better than having no agreement,” she said.

Germany was a leading player in the 2015 Iranian nuclear deal, which placed limits on the Islamic Republic’s nuclear program in exchange for sanctions relief. The deal collapsed after then-President Donald Trump, with Israel's support, unilaterally withdrew from the agreement in 2018.

The Biden administration has been trying to revive that deal despite Israel’s objections. So far, talks with Iran to salvage the deal have stalled.

“There is no point in trying to appease the Iranians, they interpret conciliation as a weakness,” Bennett argued. “They continue to mock and play the international community, dragging time and constantly advancing uranium enrichment, and destabilizing the stability in the region.”

“I think that on this point, even if at this stage it seems almost hopeless, the idea of a two-state solution should not be taken off the table, it should not be buried … and that the Palestinians should be able to live securely in a state,” she said, adding that Israel’s construction of settlement communities in disputed territory – biblical Judea and Samaria – isn’t helpful.

“Based on our experience, the meaning of a Palestinian state means that very likely there will be established a terror state, roughly seven minutes from my house and from almost any point in Israel,” he said.

Bennett described himself as a “pragmatic man” and said he was prepared to help improve living conditions for Palestinians in the West Bank and the Gaza Strip.

Despite disagreements on foreign policy, Merkel was repeatedly hailed as a “true friend” of Israel during her trip.

Merkel, a trained physicist, was granted an honorary doctorate on Sunday from the Technion, Israel Institute of Technology, for her "support of Israel, her unwavering fight against antisemitism, and for her strong support of science and education.”

Israeli President Isaac Herzog met with the chancellor and established an honorary fellowship in her name for outstanding female scientists at the Weizmann Institute.

Merkel is currently leading a caretaker government following Germany’s national elections until a new government is formed. That process could take weeks or even months.

She was originally scheduled to visit Israel in August, but the trip was postponed due to the crisis in Afghanistan.