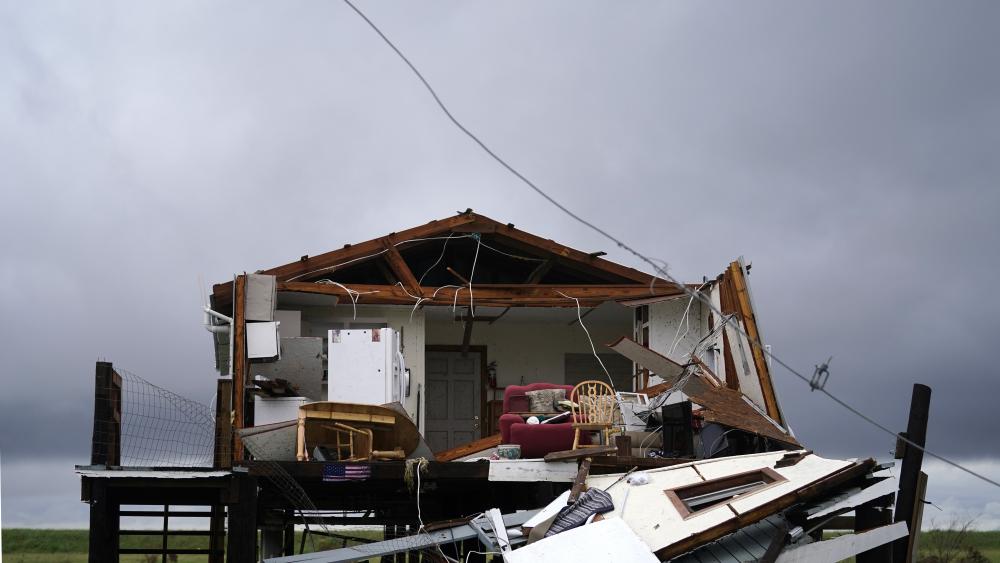 Cleanup is underway in Texas after Hurricane Nicholas roared ashore Tuesday. The storm knocked out power to more than half a million homes and businesses and dumped more than a foot of rain in the Galveston area, leaving behind a path of destruction.

Nicholas barreled ashore near Galveston as a Category 1 hurricane, but its storm status has since been downgraded.

"It was just howling like the craziest howl I've ever heard in my entire life," said one resident. "It was like a tornado that lasted for seven hours."

"Right now, we're doing damage assessments throughout the city, identifying what areas are going to need, what areas have been damaged," explained Thomas Munos, Emergency Management Coordinator for Houston.

Some damage was reported even before the storm touched down.

"Benches down, trees down, roofs off, it's coming! It's built up big," exclaimed one man.

But Houston Mayor Sylvester Turner (D) is thankful for no reported injuries or fatalities, and that the heavy rains did not cause massive flooding. "We were prepared... but quite frankly, we were we were blessed," said Mayor Turner.  "Last night, I'm not going to say lucky. You know. The good Lord just smiled on the city of Houston."

As residents pick up the pieces, they're also counting their blessings.

The roof of Antonio Maradiaga's car wash and detailing business was torn off. "We've been here four years and God is good, that's why we name it Blessing," said Maradiaga. "A lot of people think we're from a town named Blessing, but Blessings come from God."

A tree barely missed Heather Escobar's house. "We had actually just got done praying," said Escobar. "So, I'm glad it went the other way. Instead of on top of the house."

While Texas largely dodged a bullet as the storm weakened, in Louisiana widespread rainfall still poses a dangerous threat as the storm crawls to the east. Louisiana Gov. John Bel Edwards warned, "This is a very serious storm, particularly in those areas that were so heavily impacted by Hurricane Ida."

Forecasters warned Nicholas could stall over the storm-battered state dumping up to 10 inches of rain there before it spreads life-threatening flash floods across the Deep South.

"Slow-moving systems in the tropics can do this, produce lots of rain. And we're afraid of excessive rainfall today, central and southern parishes of Louisiana all the way toward the Florida panhandle," said an Accuweather forecaster.

Many of these areas or Louisiana are still cleaning up from Hurricane Ida two weeks ago.

Nearly 100,000 customers in southeast Louisiana are still without power and the streets are full of debris, which could make the flooding worse.

"There's still a lot more garbage to come to street and a lot more to be taken care of," said Ryan Scharman of Western Disaster Cleanup.

Meanwhile, President Biden has issued an emergency declaration for Louisiana, along with the one that already exists for Ida.