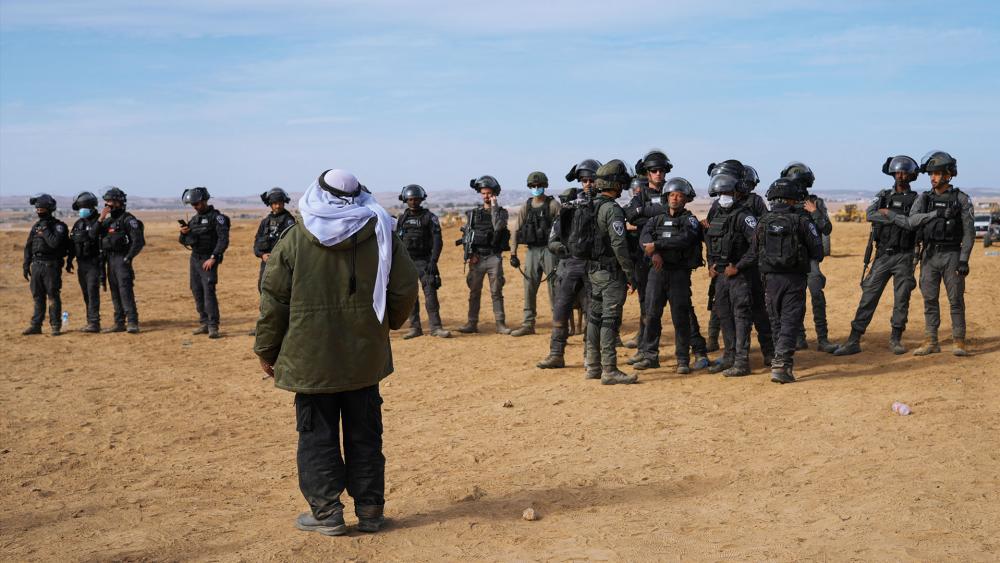 JERUSALEM, Israel – Hundreds of Bedouin protesters on Thursday clashed with Israeli police in southern Israel for the third consecutive day over the Jewish National Fund’s forestation plans on disputed land in the Negev.

Footage shows demonstrators blocking a desert highway and some hurled stones at officers, according to the police. Law enforcement used stun grenades, tear gas, and rubber bullets to disperse the crowd. Police said 13 people were arrested and described the incident as a violent disturbance.

Police said they detained six people for “disturbing the peace, throwing rocks and burning tires.” Another six were arrested for allegedly rioting.

Tensions have been simmering for several weeks over forestation work by Keren Kayemet L’Yisrael-Jewish National Fund (KKL-JNF) in the Negev region. The organization began planting trees on land settled by the Bedouin al-Atrash tribe to incentivize “new families to populate these areas,” provide a “source of livelihood for farmers” and boost the “Israeli agricultural industry.”

The Bedouins charge KKL-JNF with trying to displace them under the guise of agricultural work, and one local Bedouin municipal official predicted that thousands living in the area could be expelled due to the forestation plans. But KKL-JNF says it is simply acting on a government request to “conduct agricultural land preparation” on public land. The Bedouins claim the land belongs to them.

The crisis has threatened to topple Israel’s fragile government, which includes an Arab party whose main base of support is in the Negev. Mansour Abbas, leader of the Islamist Ra’am Party, threatened to stop voting with the rest of Prime Minister Naftali Bennett’s government coalition until the issue is resolved.

The Bedouins “were born here and will remain here. A tree is no more important than a human being,” he tweeted.

According to the plan, 1,250 acres of forest will be planted near Israel’s Anim stream. The first phase of the project involves planting 74 acres on land locals planted wheat on just a month ago, Haaretz reported.

Israel’s government announced a compromise on Tuesday which allowed KKL-JNF to complete the day’s work and begin negotiations on Thursday. Authorities withdrew heavy machinery from the area.

Former Prime Minister Benjamin Netanyahu said, “No one will stop the planting of trees in the Land of Israel.” Abbas responded by saying Netanyahu himself had agreed to stop the forestation plans during coalition negotiations in 2020 along with other concessions to Negev Bedouins.

Foreign Minister Yair Lapid urged the government to halt the forestation plan until a solution is found.

“Just as the Netanyahu government stopped planting in 2020, it is possible to stop reorganizing even now. The government of change is committed to solving the Bedouin problem and bringing about settlement in the Negev,” Lapid tweeted on Tuesday. “Politicians on all sides need to calm down instead of igniting the fire. I condemn the violence on the ground and support the activities of the police to restore public order.”

Bedouins are part of Israel’s Arab minority, which makes up 20% of the country’s population. They are Israeli citizens and have the right to vote, but many of them have close family ties to the Palestinians and identify with their cause.