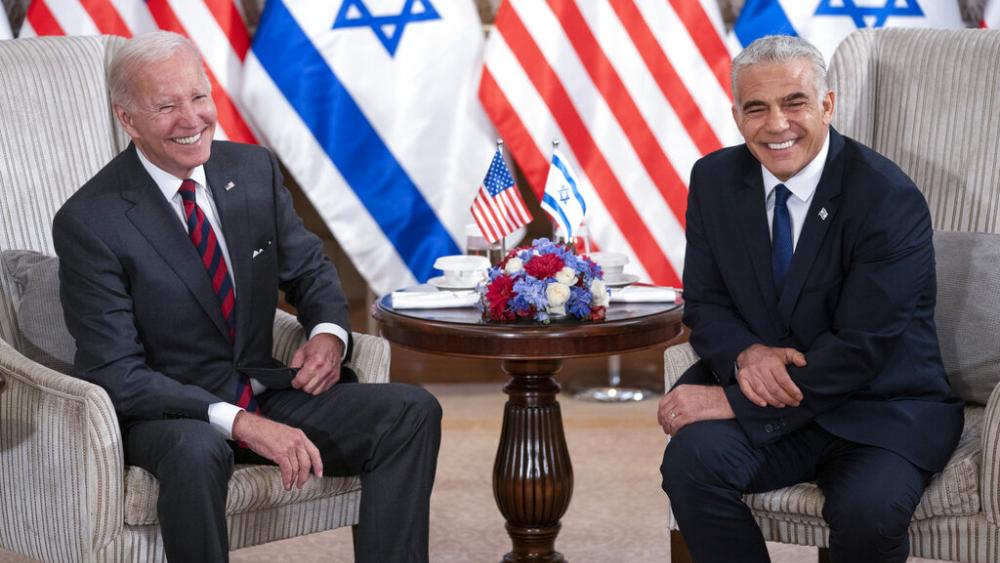 JERUSALEM, Israel – President Joe Biden says he is working with Israel to build on its blossoming partnerships with Arab countries in the region.

“I talked about how important it was from my perspective for Israel to be totally integrated in the region,” Biden said.

During the Trump administration, Israel signed normalization agreements with the United Arab Emirates, Bahrain, Sudan and Morocco in what’s been called the “Abraham Accords.”

Biden wants to develop those relationships with Israel and its partners in the Gulf further, especially because they all view Iran’s nuclear program as a common threat.

Biden’s visit comes at a precarious time in the Middle East marked by a rapidly shifting political landscape in Israel, new regional alliances and the possibility of conflict.

“It’s an honor to once again stand with friends and visit the independent Jewish state of Israel,” Biden said in a speech after deplaning.

"Every chance to return to this great country where the ancient roots of the Jewish People date back to biblical times, is a blessing. Because the connection between the Israeli people and the American people is bone-deep, it’s bone-deep," he said.

Although this is Biden's tenth visit to Israel, he said his connection to the Holy Land began much earlier because he was "raised by a righteous Christian."

After the welcoming ceremonies, he toured a display of Israel’s anti-missile systems, including the Iron Dome and the laser Iron Beam system.

Biden is welcomed by an Israeli government still in flux after four inconclusive elections in three and a half years. Israel’s political crisis will likely limit Biden’s ability to make long-lasting deals with a temporary, caretaker government that's already preparing for elections in the fall.

The most closely watched part of Biden’s journey is his visit to Saudi Arabia on Friday, which marks a major reversal of his campaign pledge to make the kingdom a “pariah” for its human rights abuses. Biden has justified his visit to Saudi Arabia as taking a pragmatic approach to foreign policy in the face of rising oil prices spurred on by the war in Ukraine and Iran’s nuclear weapons program.

It is unclear if Biden will be able to secure a pledge for more oil from Saudi Arabia. Even if he does, experts say such a commitment will do little to bring down oil costs because the kingdom already has a very limited spare capacity.

In Israel, excitement is growing over speculation that Saudi Arabia could soon normalize ties and join a growing network of Arab countries that have recently established relations with Israel thanks to the Abraham Accords.

A senior Israeli official told reporters on Tuesday that there is an impending announcement regarding the “immediate materialization” of a normalization process between Israel and the Saudi kingdom, The Times of Israel reports. However, Biden officials have been far more cautious, saying that normalization would be a “long process."

Still, Biden aims to present Saudi Arabia as a strategic partner in the Middle East, especially since the kingdom, like Israel and the US, sees Iran as a growing threat.

In addition to meeting with Israeli and Palestinian leaders, Biden reaffirmed America’s commitment to a two-state solution to the Israeli-Palestinian conflict and became the first US president to visit Augusta Victoria Hospital in East Jerusalem on Friday. There he pledged $100 million for Palestinian healthcare. The move is controversial because East Jerusalem is territory the Palestinians envision as the capital of a future state and land Israel has already claimed sovereignty over.

The US and Israel issued a joint declaration on Thursday that included a condemnation of Iran’s nuclear program and a commitment by both countries to use “all elements of their national power against the Iranian nuclear threat."

Looming over the visit is the Biden administration’s beleaguered efforts to revive the Obama-era Iran nuclear deal. The deal, signed in 2015 and abandoned by former President Donald Trump in 2018, limited Iran’s nuclear activity in exchange for sanctions relief. Talks to restore the deal have been stalled due to Biden refusing Iran’s demand to remove its Revolutionary Guards from a US terror blacklist.

Iran is believed to be closer than ever to a nuclear weapon, increasing concerns about an impending conflict or a nuclear arms race in the Middle East.

“The only thing worse than the Iran that exists now is an Iran with nuclear weapons,” Biden said during an interview on Wednesday with Israel’s Channel 12. When asked about using military force against Iran, Biden said, “If that was the last resort, yes.”

Biden has spent much of the year focused on Europe, but his administration wants to send the message that the US still has interests in the Middle East.

"If we act now to create a peaceful and stable region, it will pay dividends for the American national interests and for the American people for years to come," said Jake Sullivan, the president's national security adviser.