The Jerusalem Prayer Breakfast: Following God’s Command to Pray for the Peace of Jerusalem 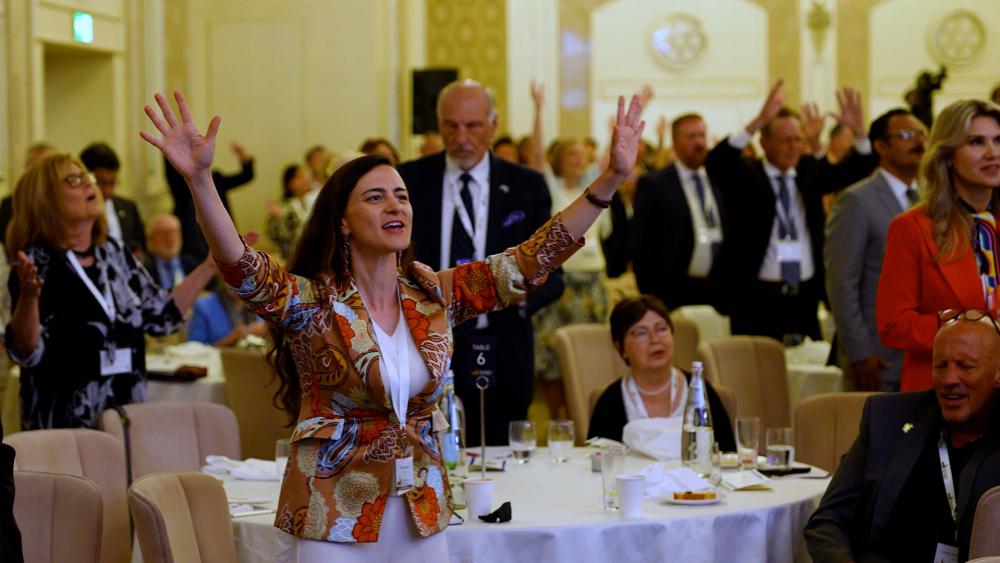 Hundreds of Jews and Christians gathered in Jerusalem for the sixth annual Jerusalem Prayer Breakfast. The gathering follows the biblical command to Pray for the Peace of Jerusalem as it says in Psalm 122:6.

Delegates from around the world came to Jerusalem in pray, among them former U.S. Congresswoman, Michele Bachmann, who also serves as Co-Chair of the Jerusalem Prayer Breakfast.

“This is our sixth year being here and it’s very simple.  We’re trying to fulfill the commandment when God says to pray for the peace of Jerusalem.  And we invite people from all over the world, members of Parliament, members of Congress to come be a part of this. But also, people who just love Israel,” Bachmann told CBN News

“So, we have had upwards [of] 70 different countries here at any given year, simply to be obedient to the Word of God which is to pray for the peace of Jerusalem. We’ve seen miracles because of those prayers, and I have no doubt we will see that this time as well,” Bachmann said.

This year Nick Vujicic of Life Without Limbs ministry came to the breakfast for the first time.

“The revelation and magnitude of that really is that from all people of all nations of all tongues who do believe in the Bible, we know the importance, so much so that we made sure that we are here to do a Jerusalem Prayer Breakfast in Jerusalem.  You know, we know how important this is. We know how close Israel is to God’s heart and that all of us are praying,” Vujicic told CBN News.

Vujicic also said it was a time to stand with Israel and the Jewish people.

“We’re here representing the Christian worldwide community to let our Israeli friends and brothers and sisters know that they are not alone, that we stand with them,” Vujicic said.

“It’s a privilege and an honor to further the bridge between Christians and Jews because we all know without the Jewish faith, the Christian faith is not there whatsoever.  And it’s a celestial foundation that we are privileged and grateful to have our faith and then build upon that,” he said.

“All eyes are on Israel now.  All eyes are looking at Iran.  No matter what country you are coming from, you know this is the lynchpin of lynchpins of peace or no peace,” he added.

As part of the Jerusalem Prayer Breakfast this year, the city of Jerusalem along with American Christians dedicated a statue of the Lion of Judah.

“This is exciting.  We have one of the most beautiful sculptures ever placed in Jerusalem and Max Griener, an artist from Kerrville, Texas had it in his heart.  God just gave him a vision a sculpture, a huge, giant sculpture of a lion, depicting the Lion of Judah to have here so it would be a representation that we as believers in Christ love Israel and we love the Jewish people,” Bachmann said.

“That representation of that but also a representation that America loves Israel.  That was on Max’s heart, so today [it was] dedicated and the purpose is to remind the people of Jerusalem and especially the young coming up that Christians are friends of Israel and America is a friend of Israel,” she said.

Since it began in 2017, the Jerusalem Prayer Breakfast has grown dramatically, and it’s been held in 15 nations from Dallas in the U.S. and Rome in Europe to Ghana in Africa.

“I think the Jerusalem Prayer Breakfast is the call of God for the nations to align with Jerusalem as the footstool of God’s throne on the earth, to recognize that His government is above every other government and He’s calling on them now to align their government properly,” Rick Ridings, Co-founder of Succat Hallel 24/7 Prayer Ministry told CBN News.

“Coming here is very powerful and a blessing,” said Ken Ofori-Atta, Ministry of Finance of Ghana.

“The Spirit and the certainty and affirmation that this is the Land and this is what God wants for us to all come together to bring peace to the world. The more nations will come to it and all the prophecies of Isaiah will come to be and blessings will come to Africa and to Ghana,” Ofori-Atta told CBN News.

“Through prayer we can change things,” said Chiara Canciani from Christians for Israel, Italy.

“We can change history and we can ask God to do His will on earth. And also because it’s written in all the Bible that we should pray for the peace of Israel and the peace of Jerusalem.  So, this is an assignment that God gave us,” Canciani told CBN News.