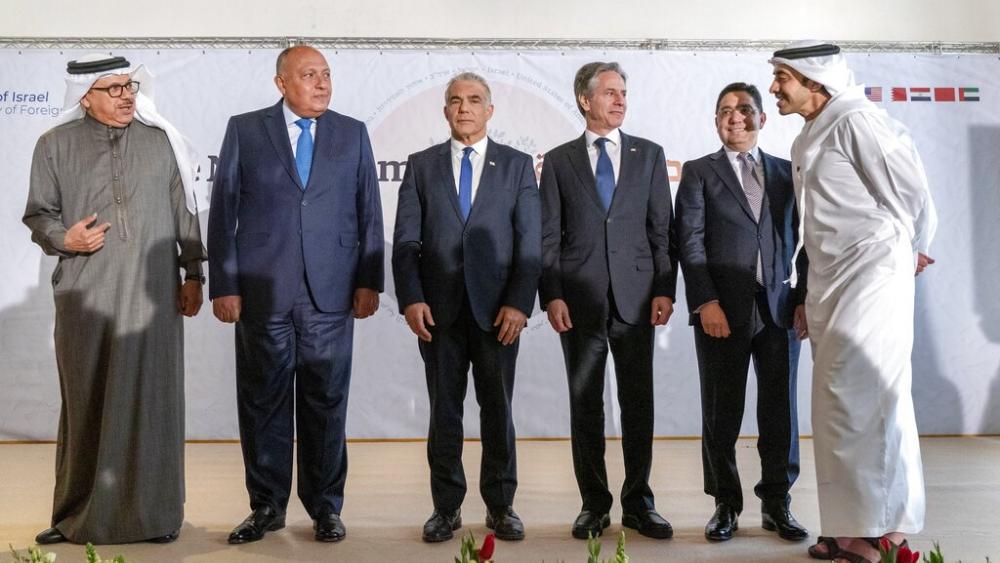 JERUSALEM, Israel - The foreign ministers of four Arab countries joined US Secretary of State Antony Blinken for a historic conference in Israel focused on the development of the Abraham Accords and the mutual threat of Iran.

Foreign ministers from Bahrain, the United Arab Emirates, Morocco, and Egypt convened in the Israeli desert on Monday for what’s been called the “Negev Summit." The two-day meeting took place at the former home and gravesite of David Ben Gurion, the father of modern Israel.

“This new architecture, the shared capabilities we are building, intimidates and deters our common enemies – first and foremost Iran and its proxies,” he said.

“They certainly have something to fear.”

Lapid also announced that the summit is just the beginning of a permanent regional forum between Israel and its Arab partners.

The Negev Summit is the result of the US-brokered Ahraham Accords, which saw Israel normalize ties with Bahrain, Egypt, Morocco, and the UAE.

Blinken said the Biden administration would continue to support and foster the accords.

Former Israeli Ambassador to the US Michael Oren tells CBN news the summit is “quite an extraordinary moment.”

“The fact that they are coming here to be with us, to recognize that Israel is not just here, but Israel is a regional power and is an ally regional power. We’re an essential ally of these Arab states,” says Oren.

Oren sees the gathering as history in the making but it also comes as the US is nearing the completion of a renewed Iranian nuclear deal endorsed by US Secretary of State Antony Blinken in Jerusalem.

“The United States believes that a return to full implementation of the Joint Comprehensive Plan of Action is the best way to put Iran’s nuclear program back in the box that it was in, but has escaped from since the United States withdrew from that agreement,” Blinken told reporters during a press conference on Sunday.

Israel’s Foreign Minister Yair Lapid emphasized Israel will do what it takes to stop Iran.

“Anything. From our point of view, the Iranian threat is not theoretical. The Iranians want to destroy Israel. They will not succeed; we will not let them,” said Lapid.

Oren says the new nuclear agreement is worse than the original.

“The fact is that the Iranians are going to get pretty much everything that they want … they'll get a nuclear program that will enable them to retain their nuclear infrastructure … to develop an intercontinental ballistic delivery system,” says Oren.

“(The new deal) will probably say nothing about the development of nuclear warheads,” Oren says, adding that after four years, Iran may be in a position to “enrich enough uranium for hundreds of bombs.”

He adds, “I am certain that this deal will put Israel and the Middle East on a path to a regional conflict."

Oren and other critics say the deal will also give Iran billions of dollars in sanctions relief to spread its terror activities throughout the region. How Israel and these Arab nations at today’s summit plan to confront Iran may well determine the future of the Middle East.