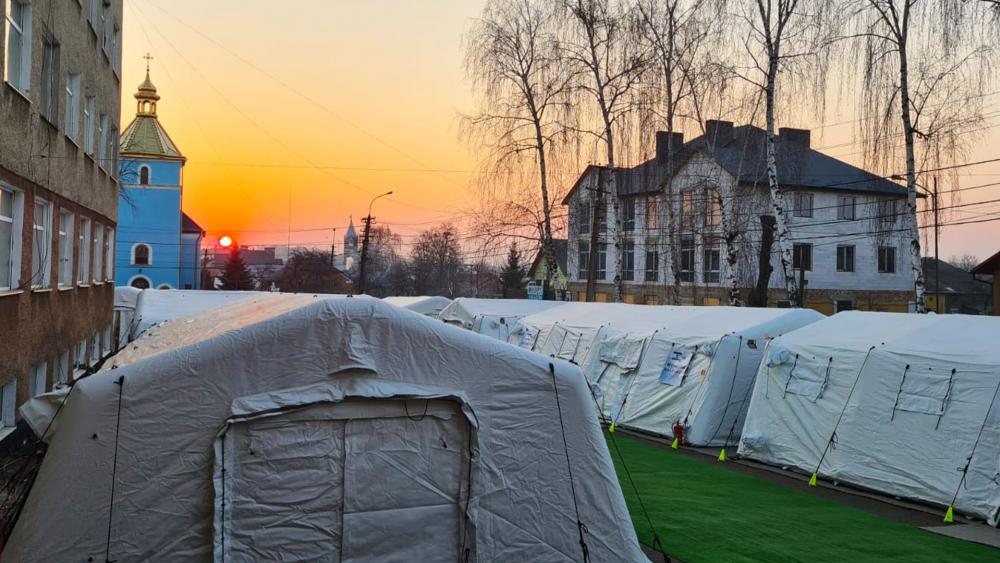 One of Israel’s international missions is to lead the way in providing whatever help is needed when international disaster strikes. The war in Ukraine is no different. Israel has established field hospital, which is also teaching a lesson in forgiveness.

Ukrainian and Israeli officials dedicated the Mostyska field hospital, located in Western Ukraine between Lviv and the Polish border.

“The State of Israel’s mission to Ukraine today stands [as a] unique moment in history. It effectively connects between our past Jewish life here that goes back 1,000 years here to the modern Jewish State,” said Dr. Yoel Har-Even, Director of Sheba Global and head of the field hospital.

“Our mission is to make sure the Ukrainian people know that they are not alone in this chaos. We bring our expertise to provide essential medical care and a medical solution to those who need,” Har-Even said.

The $6.5 million project is operated by Sheba Medical Center and Schneider Children’s Medical Center in conjunction with Israel’s Health and Foreign Affairs Ministries.

“The name of the hospital is Kochav Meir – Shining Star is named after Golda Meir, who was born in Kiev and after later on became the prime minister of the State of Israel. We are certain that this shining star will lead the path in this difficult time for Ukraine,” said Deputy Ambassador Yoav Bistrizky, Chargé d'Affaires of the Israeli Embassy in Ukraine.

Ukrainians started arriving as soon as the doors opened.  One woman brought her young daughter.

“I came here with my daughter. She has problems on her skin.  As I know there is here an Israel hospital and I have very high trust that Israel medicine. So, I decided to come and check out my daughter here,” said the woman who was from the Lviv area.

In providing treatment for refugees, the hospital includes an emergency room, delivery room and departments for men, women, and children. There are also imaging and laboratory capabilities with remote technology connected to Sheba Medical Center in Israel.

“We’re here to give full support and partnership with the local hospital,” said Dr. Adam Goldstein, Head of Trauma Surgery at the Wolfson Medical Center in Tel Aviv. “We’re like an extension of their hospital, a unit in the field. We’re working closely with their doctors and their system. We’re just here to help in any way we can.”

Israel sent 10 tons of medicine plus beds, equipment and more than 60 workers.  Many have Ukrainian-born parents or other relatives forced to flee or who were captured during the Holocaust.

“Eighty years ago, my mother, Victoria, who was then a 15-year-old girl, after her family was murdered in Belzec, fled her home not far from here on her way to freedom,” said Prof. Elhanan Bar-On, Director of the Israel Center for Disaster Medicine & Humanitarian Response at Sheba Medical Center.

“Today, I, Elhanan Bar-on stand here representing the State of Israel as part of a field hospital, lending a helping hand, to anyone in need friend or foe and sharing our knowledge with our Ukrainian colleagues because medicine has no boundaries,” Bar-On said.

“We will underscore Israel’s everlasting principles to extend a helping hand to those who are in need. By doing so we are providing hope without boundaries within a turbulent sea of tragedy.  In the immortal words of the legendary Rabbi Akiva, ‘Love thy neighbor as thyself,’” said Prof. David Dagan, Head of the delegation from Israel’s Ministry of Health.

The opening ceremony included raising both the Israeli and Ukrainian flags, singing of the national anthems and a hope that the war would soon be over.