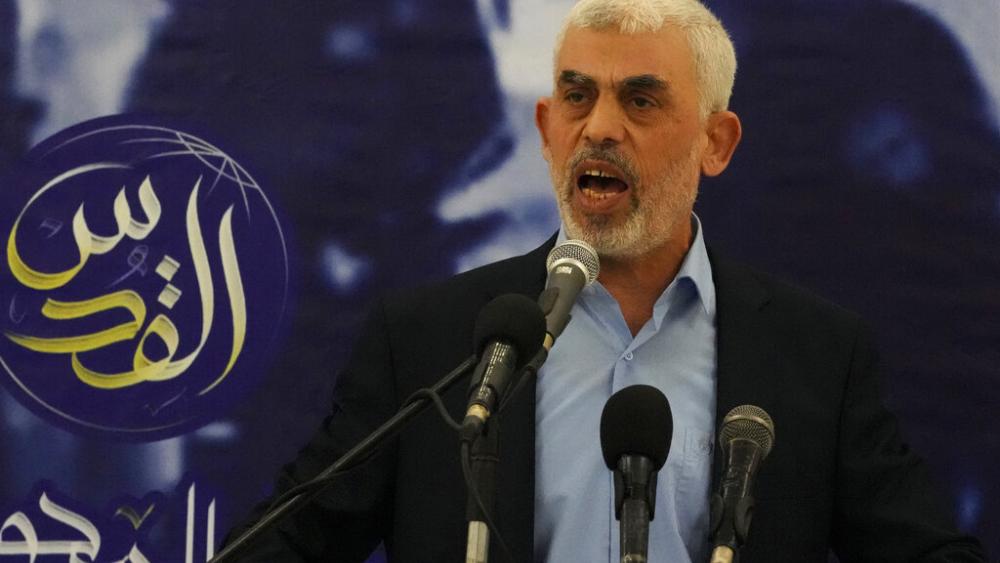 Yahya Sinwar, head of Hamas in Gaza, delivers a speech during a meeting with people at a hall on the sea side of Gaza City, Saturday, April 30, 2022. (AP Photo/Adel Hana)

JERUSALEM, Israel – Hamas leader Yahya Sinwar on Saturday said the terror group “will not hesitate to take any steps” if Israel “violates” Al-Aqsa Mosque in Jerusalem.

“Our people must prepare for a great battle if the occupation does not cease its aggression against the Al-Aqsa Mosque,” Sinwar said during a speech in Gaza.

For weeks, tensions have been boiling in Jerusalem at the Al-Aqsa Mosque compound located on the Temple Mount – Judaism’s holiest site and the third holiest site in Islam. Muslim rioters have repeatedly clashed with Israeli police, threatening to set off a broader conflict with Palestinian terror groups in the Gaza Strip.

Palestinian terror groups have characterized themselves as the “defenders” of the Jerusalem holy site, and often use the clashes there as justification to attack Israel.

Last year, efforts by Israeli police to stop persistent rioting on the Temple Mount helped trigger an 11-day war with Gaza that began after Hamas fired rockets at Jerusalem.

During his speech, Sinwar called on Palestinians to attack Israeli targets in the West Bank – biblical Judea and Samaria.

He also praised the terrorists who killed an Israeli security guard outside the entrance of a Jewish settlement community in the West Bank Friday night. A recent wave of Palestinian terror attacks in Israel and the West Bank have killed 15 Israelis.

Sinwar characterized Mansour Abbas, the leader of the first Arab party to join an Israeli government, as a traitor.

“That you serve as a support to this government, which violates Al-Aqsa, is an unforgivable crime,” Sinwar said and called on Abbas to break up Israel’s government coalition.

Prime Minister Naftali Bennett shot back on Sunday, saying the fact that Hamas wants to topple his governing coalition “says it all.”

“On this as well, Sinwar cannot be allowed to win,” Bennett said during a Cabinet meeting.

"On behalf of all of us, all ministers of the Government of Israel, I would like to again thank and back the IDF, the ISA and the Israel Police, and their leaders. These are people who have hardly seen home in many long weeks," said Bennett. "We are charged with the task of defeating this wave as well. We – the Government of Israel and the citizens of Israel – must also show you our gratitude, back you and give you all the support and tools to succeed."