'We Prayed for it for Thousands of Years': Israelis Celebrate the Reunification of Jerusalem 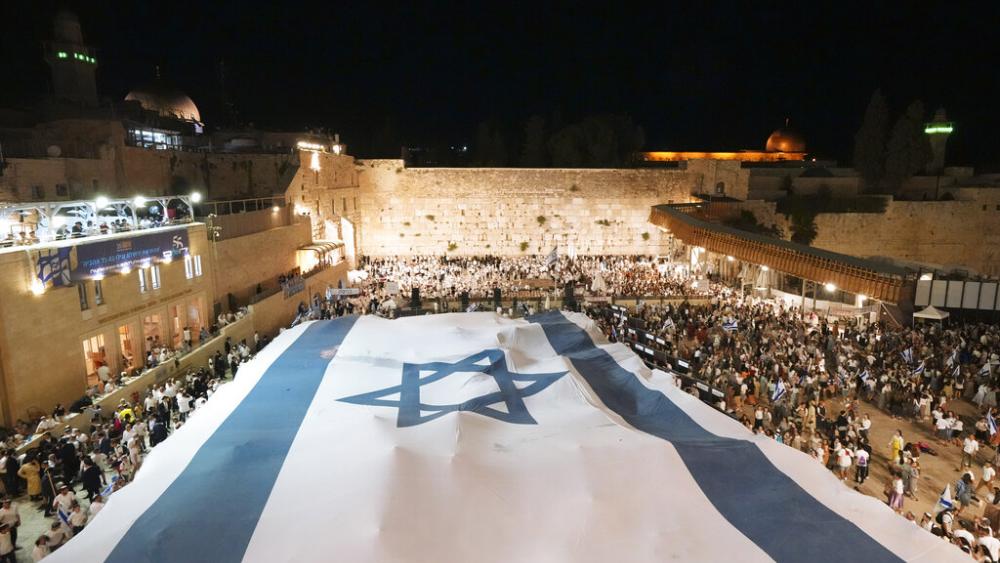 Members of Jewish youth movements unfurl a giant Israeli flag on the eve of Jerusalem Day. (AP Photo)
6306963945112
'We Prayed for it for Thousands of Years': Israelis Prepare to Celebrate the Reunification of Jerusalem

JERUSALEM, Israel – On May 29th, Israel celebrates Jerusalem Day. The celebration marks the time when Israeli troops captured the city after it was held by foreign powers for more than 2,000 years.

Jerusalem Day is celebrated with flags and marches by thousands of Israelis throughout and around the Old City.

“Jerusalem is where everything started. Everything started here for the Jewish people. This is where we became a nation. This is the capital of our nation where all the tribes of Israel united around it. Jerusalem is mentioned so many times in our Bible and when people pray, they pray to Jerusalem. So, for us, it’s really the focal point, the place where every Jew feels this is home," Ret. Gen Amir Avivi told CBN News.

Avivi founded the Israel Defense and Security Forum, an organization dedicated to the protection of the Jewish state. A major step for that security, he believes, is more nations moving their embassies to Jerusalem like the US did in 2018.

His group honored the nation of Kosovo for moving theirs more than a year ago.

“It has been almost more than a year that we established diplomatic relations with Israel. And since that day our relations went from strength to strength,” said Ines Demiri, Kosovo’s ambassador to Israel.

Yet while some nations have recognized Jerusalem as Israel’s capital, other countries advocate for the so-called Two-State Solution that would divide Jerusalem with the eastern half of the city including the Temple Mount and give it to the Palestinian Authority.

“You can’t take a jewel and divide it. It needs to remain whole,” said Avivi. “I think that when people say, ‘we want to divide Jerusalem or we want to take the holy sites,’ they’re not talking about the Two-State Solution, they’re talking about destroying the soul of the Jewish people. And we will never, never let this happen.”

Jerusalem’s deputy mayor told CBN News the Jewish people have longed for the city for millennia.

“To the Jewish people, it means a return to Zion,” says Deputy Mayor Fleur Hassan Nahoum. “We prayed for it for thousands of years. We were physically but we didn’t have control of the city. And when we didn’t have control of the city, we were barely allowed to worship freely. We were barely allowed to be here, so to return as a free people, to rebuild the new city and the old city, to preserve the beauty of our heritage and to bring worshippers from all around the world including pilgrims, such as our Christian friends from all corners of the world here so they can also pray at the Christian sites. It’s wonderful.”

CBN Films produced a docu-drama commemorating the reunification of Jerusalem called “In Our Hands: The Battle for Jerusalem.”