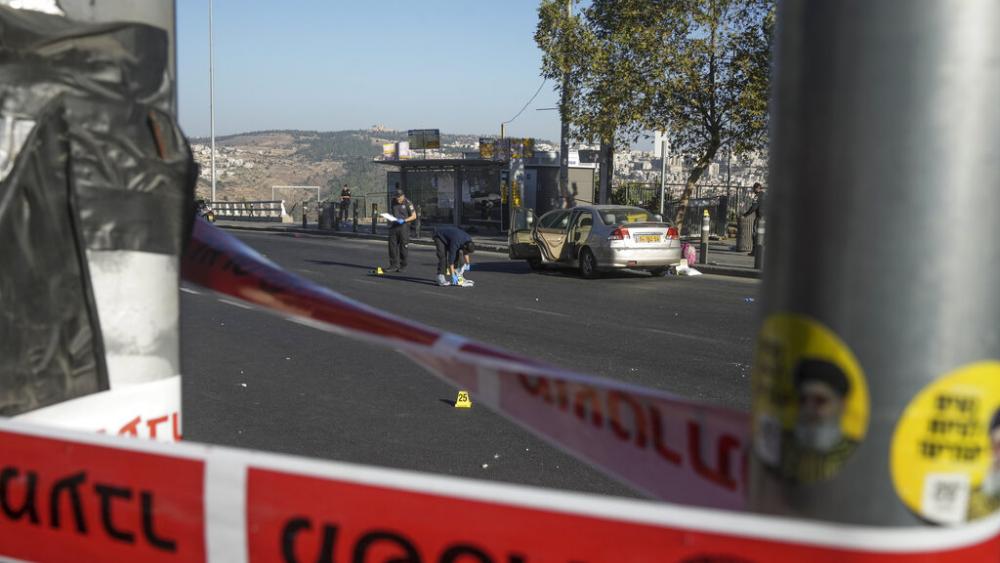 Israeli police inspect the scene of an explosion at a bus stop in Jerusalem. Wednesday, Nov. 23, 2022. At least a dozen were injured. Police suspect terrorism. (AP Photo/Maya Alleruzzo)

JERUSALEM (AP) — Two blasts went off near bus stops in Jerusalem on Wednesday, injuring at least 11 people, in what police said were suspected attacks by Palestinians.

One of the blasts went off near a bus stop on the edge of the city, where commuters usually crowd waiting for buses. The second went off in Ramot, a neighborhood in the city's north. Hospitals said they received about a dozen wounded, including two who were critically injured and two seriously.

The apparent attacks came as Israeli-Palestinian tensions are high, following months of Israeli raids in the occupied West Bank prompted by a spate of deadly attacks against Israelis that killed 19 people. There has been an uptick in recent weeks in Palestinian attacks.

The violence also comes as former Israeli Prime Minister Benjamin Netanyahu is holding coalition talks after national elections and is likely to form what's expected to be Israel's most right wing government.

Police said the twin blasts occurred amid the buzz of rush hour traffic and they closed part of a main highway leading out of the city, where the first explosion went off.

“It was a crazy explosion. There is damage everywhere here, ” Yosef Haim Gabay, a medic who was at the scene when blast occurred, told Israeli Army Radio. “I saw people with wounds bleeding all over the place.”

While Palestinians have carried out stabbings, car rammings and shootings in recent years, bombing attacks have become very rare since the end of a Palestinian uprising nearly two decades ago.

The Islamic militant Hamas, which rules the Gaza Strip and once carried out suicide bombings against Israelis, praised the perpetrators of the attacks, calling it a heroic operation, but stopped short of claiming responsibility.

"The occupation is reaping the price of its crimes and aggression against our people,”

“It’s time to take a hard line against terrorists, it’s time to make order,” he tweeted.