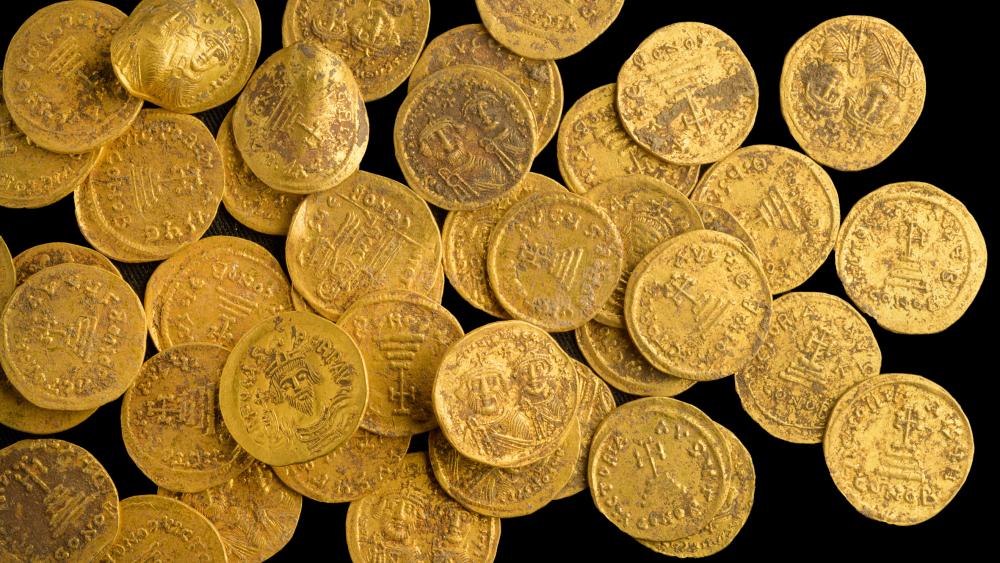 JERUSALEM, Israel – The Israel Antiquities Authority (IAA) has announced the discovery of 44 pure gold Byzantine Era coins during an excavation at the historic Banias site, now a national park, in northern Israel. The coins were minted in the 7th Century by Byzantine Emperors Phocas and Heraclius, and were probably hidden before the Muslim Conquest of Palestine in 635 AD.

The coin hoard weighs 170 grams (6 ounces), and it was found hidden at the base of a stone wall.  Dr. Yoav Lerer directed the excavation and described it as reflecting “a specific moment in time, when we can imagine the owner concealing his fortune in the threat of war, hoping to return one day to retrieve his property. In retrospect,” Lerer added, “we know he was less fortunate.”

Raya Shurky, director of the National Parks Authority, believes the gold hoard compares in significance with the recent discovery at Banias of a Byzantine era church, possibly the Church of St. Peter. Banias is believed to be the site (Caesarea Philippi) where the Apostle Peter declared Jesus to be the Messiah.

Before the time of Jesus, it was first established by the Canaanites as a dedication to the god Baal, and later used as a cultic site by the Greeks to worship the god, Pan.

“The Banias Nature Reserve, endowed with its unique nature and landscape, does not cease to surprise us from a historical-cultural point of view,” Shurky said.

The excavators found artifacts including a pottery kiln, bronze coins, pottery fragments and glass.  The items spanned several centuries from the Byzantine era through the early Middle Ages (1000 to 1200 AD).

IAA Director Eli Escusido said the IAA and the National Parks Authority “will work together to exhibit the treasure to the public.”