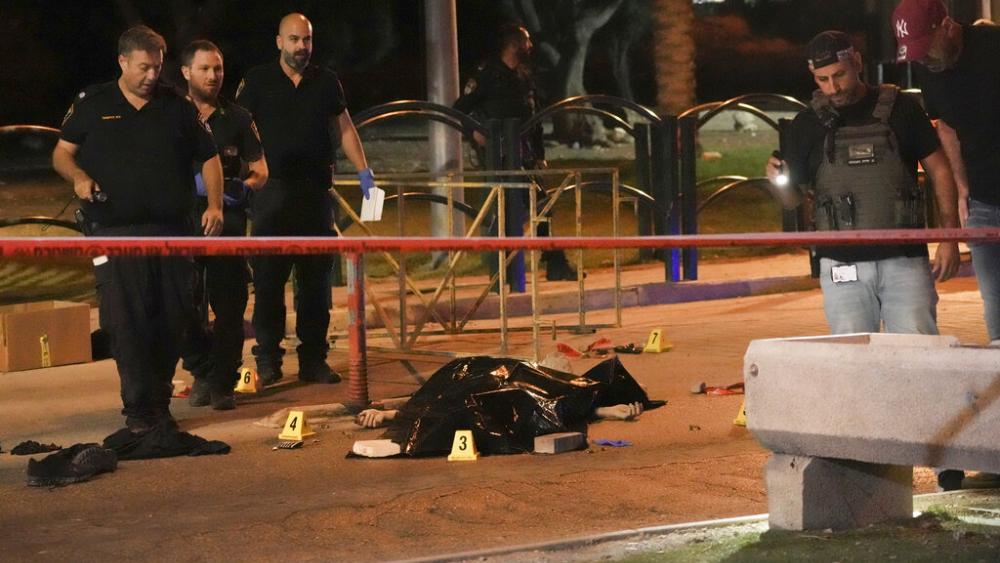 Israeli police officers stand next to the body of Palestinian attacker at the scene of a shooting attack outside the Israeli settlement of Maale Adumim, in the West Bank, Wednesday, Oct. 19, 2022. (AP Photo Mahmoud Illean)

JERUSALEM, Israel – Alert checkpoint guards at the entrance to a community outside Jerusalem shot and killed the suspected murderer of 18-year-old Israeli solder Noa Lazar at the Shuafat checkpoint last week. Udai Tamimi, 22, a resident of eastern Jerusalem, was attempting a second attack in the Judean city of Maale Adumim, when the guards opened fire. Tamimi had eluded capture since Lazar's death on October 8.

The Jerusalem Post quoted Lazar's family as saying in a statement, "With his death, the circle has been closed, and justice was done quickly." The family also thanked the nation for standing with them. A 30-year-old border guard who was seriously wounded during the Shuafat shooting remains in intensive care.

Maale Adumim Mayor Benny Kashriel called the outcome a "miracle" and praised the guards' courage. "The moment the terrorist began shooting at them, the security guards identified him and shot him," he said.

Wednesday's shooting is just one of many violent incidents and unrest in parts of the West Bank. Armed Palestinian militants are increasingly targeting border checkpoints, Israeli communities in Judea and Samaria, and roads where soldiers are congregated or deployed along the security barrier.

In northern Israel, a Nablus-based Palestinian group called the Lion's Den, which claimed responsibility for killing Staff Sergeant Ido Baruch last week in Shavrei Shomron, is apparently still targeting Israeli soldiers and police. Security police apprehended a man believed to be part of the group on Wednesday. The Israeli Defense Forces have placed a tight security ring around Nablus, severely limiting entrances and exits around the city.

Israeli Prime Minister Yair Lapid warned the violence will not be tolerated. "We will not rest until we get our hands on every terrorist that has harmed Israeli citizens and IDF soldiers," he said.