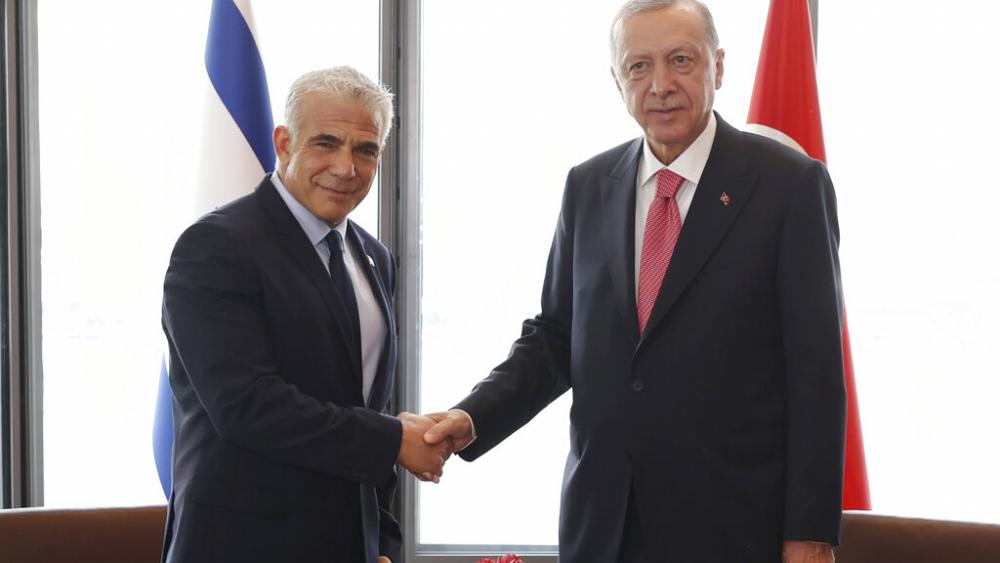 In this photo provided by the Turkish Presidency, Turkey's President Recep Tayyip Erdogan, right, shakes hands with Israeli Prime Minister Yair Lapid during their meeting on the sidelines of the United Nations General Assembly in NY, US, Sept. 20, 2022.

Lapid is in the US for the annual speeches by world leaders during the kickoff of the 77th United Nations General Assembly.

The prime minister hailed what he believes is a renewal of strong ties between Israel and Turkey following years of acrimony over the Palestinian issue.  Part of that renewal was an announcement Monday that Israel will promote its charge d’affaires  in Turkey to ambassador.

Turkey has so far not appointed an ambassador to Israel in Tel Aviv.  Both sides agreed to a restoration of ambassadors last month.

A statement from the prime minister’s office read that Lapid also “thanked President Erdogan for intelligence cooperation at the time of Iran’s attempts to carry out terrorist attacks on Turkish soil.”

During his meeting with King Abdullah, Lapid stressed that Israel would act to protect its citizens from an upsurge in terrorism during the coming Jewish holidays, beginning with Rosh Hashanah on Sunday evening.

King Abdullah’s office also released a statement calling for maintaining the peace during the holidays, and protecting the Muslim and Christian holy sites.

Lapid is scheduled to address the UN General Assembly on Thursday.