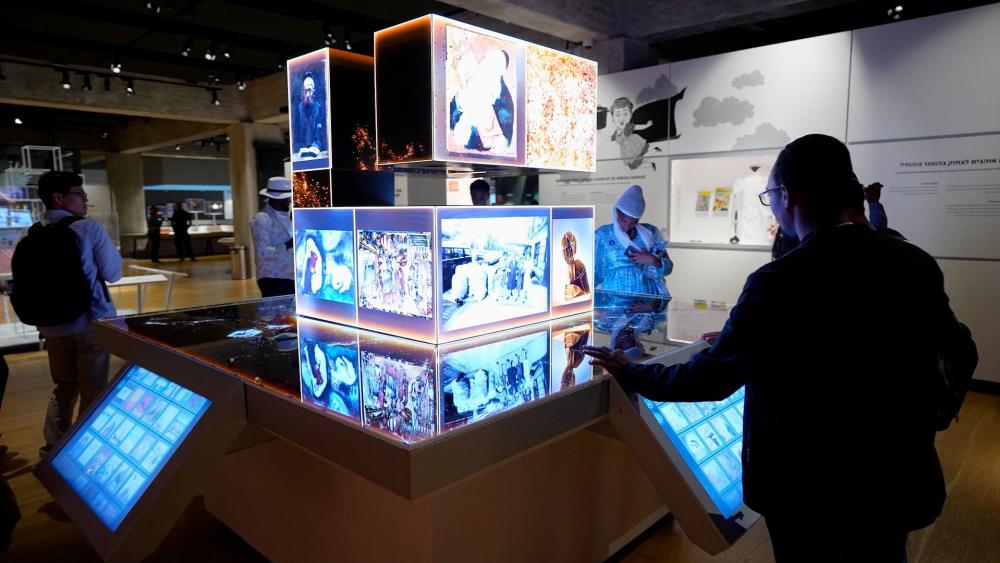 TEL AVIV, Israel – When God wanted to tell the story of His faithfulness through the ages, He chose to do it through the Jewish people.  Now, that history is the subject of a new museum in Israel.

It’s called Anu – it means “us” – The Museum of the Jewish People in Tel Aviv. Its goal:  tell the story of God’s chosen people from Abraham until today.

It's the biggest museum of its kind in the world. So, while there are literally hundreds of Jewish museums all over the world. This is the only one that attempts to tell the whole story, historically, geographically, and thematically,” says Dan Tadmor, CEO of Anu, The Museum of the Jewish People.

The museum uses artifacts, stories, artwork, and innovative technologies to tell the good and sometimes difficult history of the Jewish people like never before.

The museum covers 72,000 square feet of exhibition space spread over three floors. One aspect features inter-actives like one where you can find out if your name is from the Bible.

Another one shows Jewish food from around the world and how to make certain special recipes.

More than fifty original films help tell the various parts of the story.
The historical wing, for example, begins with a “seven-minute huge projection that tells the entire story of Jewish migrations through the ages,” Tadmor explained while giving CBN News a tour of the museum. “This wing is a chronological track that begins with Abraham and ends with the establishment of the State of Israel and beyond.”

From there path begins with the 586 BC destruction of the first Jewish Temple.

“Until then all Jews resided in one place, the Land of Israel. Ever since then, Jews never [resided] in one place. So for 2000 years and the present, we Jews always live in diverse places,” he said.

There’s an exhibit that explains how Jews were the first to believe in Jesus.

“And of course, the first Christians considered themselves Jews because they were. And so, this is that part of history,” Tadmor says.

Visitors can learn about the rebellions against the Romans which led to the Jews’ expulsion from the Land. And how in Spain, Jews were forced to convert to Christianity during the Inquisition.

Even though the dark chapters in Jewish history, like the Holocaust, are part of the story, Tadmor says, the museum is about Jewish life.

“When we look at Jewish history and Jewish life, we refuse to do so solely from the position of the victim. Jews have not only been persecuted and survived. Along the way, we've thrived and flourished [and] contributed,” he said.

In the museum, there’s a replica of a letter written by George Washington to the Jewish community of that synagogue.

“It's a very famous letter in which he basically says the Children of Abraham will always have a home in these United States,” Tadmor relates.

Tadmor’s favorite item is here in what they call the Hallelujah Hall, dedicated to synagogues around the world throughout the ages.

“It actually all begins with the Temple in Jerusalem. So, time was when all Jews resided in one place, the Land of Israel. And we had one Temple, which we would congregate in. With the destruction of the Temple and Jews being dispersed in the world there became a need for synagogues,” he said.

Most of the synagogues represented are still in use. But one, the biggest synagogue in Warsaw, Poland, was blown up by the Nazis.

The leadership hid the holy items before the Nazis arrived and then secretly sold them to feed the Jews in the ghetto.  A giant menorah from the synagogue survived and is on display.

“So, this is the actual object from a synagogue that was destroyed by the Nazis over 70 years ago and it miraculously survived because a Swedish philanthropist acquired it,” Tadmor said.

“It somehow made its way to Stockholm, probably because you were able to dismantle it and send it and it has survived. The synagogue didn’t. The congregants of the synagogue didn't. But the menorah did. And so, you asked me about my favorite object.

Tadmor says the museum is so big you can’t see it all in one day. But that only encourages people to return again and again to interact with the never-ending story of the Jewish people.