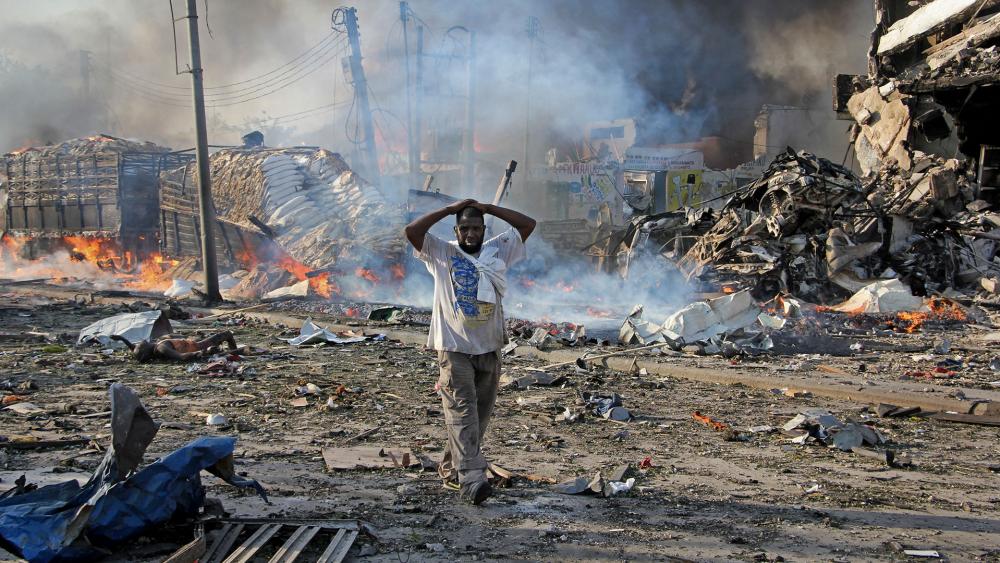 Pentagon officials confirm the Islamist extremist group al-Shabaab carried out Saturday's massive bombing in Mogadishu that killed as many as 302 people.

The scale of the loss makes the attack, which involved a truck packed with several hundred kilograms of military-grade and homemade explosives, one of the most lethal terrorist acts anywhere in the world for many years.

Rescue workers said a definitive death toll may never be established because the intense heat generated by the blast meant the remains of many people would not be found.

Others may have been buried quickly by relatives.

Al-Shabaab has been under siege by Somali and African Union forces, as well as from US airstrikes on its bases.

Pentagon spokesman Col. Rob Manning said the U.S. has close to 400 troops in Somalia, but denied speculation that more soldiers will be sent in the wake of the deadly attack.

This latest Al-Shabaab attack against Christians came shortly after the terrorist group killed four Christians in coastal Kenya on Wednesday.

A source said al-Shabaab militants called out the names of those killed before beheading them.

Three Kenyan Christians were also hacked to death by Al-Shabaab terrorists on Friday night after they refused to recite the Islamic prayer of faith.

A fourth Christian – the mentally challenged older brother of one of the three – was also killed.

Al-Shabaab took responsibility for the slaughter of 148 people, mostly students at Garissa University College in Kenya in 2015, where gunmen took over 700 students hostage, killing the Christians and freeing the Muslims.

A US State Department official told the Washington Post under the condition of anonymity that despite the scale of the attack on Saturday, the U.S. still feels confident that it's driving out the radicals.

"As terrible as the individual attack is, the fact is we don't see this every day now in Somalia. This is extraordinary, and it doesn't change the overall positive trajectory we're seeing there," the official said.