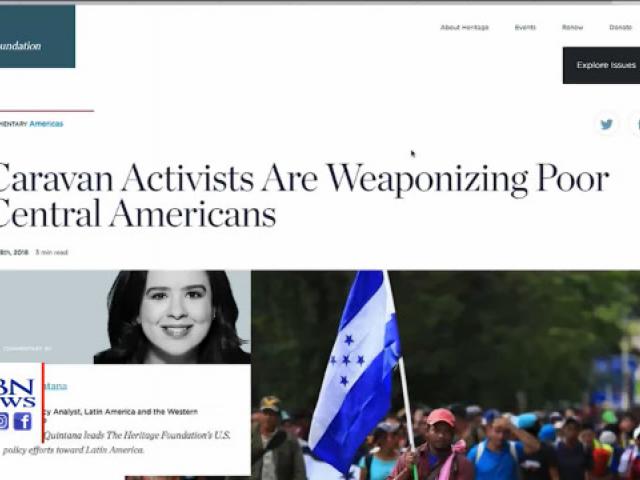 WASHINGTON – A caravan of Central American migrants headed to the United States has become a hot topic for the upcoming midterm elections. The group is now up to 7,000 people who are more than 1,100 miles away from the border.

Immigration experts say this is turning into a prime example of leftist groups grandstanding off of desperation and poverty.

President Trump on Monday said the United States will begin to cut off or reduce aid to Honduras, Guatemala and El Salvador, as citizens of those countries head for the US. Trump declared a national emergency, claiming that "unknown middle easterners" had joined the group.

"The Democrats would rather destroy American communities than defend America's borders," Trump said.

Steven Camarota of the Center for Immigration Studies said, "This whole problem, which has been going on since 2012, was precipitated by the Obama administration's creation of DACA. People got the message that kids could stay."

Camarota blames Congress for not fixing the broken immigration system since some migrants are using these undocumented children to get their day in court and never showing up for it.

He adds, these Hondurans have traveled through Guatemala and Mexico, and both countries have asylum procedures, but their goal is to live illegally in a rich country.

"The number of people in the asylum queue right now is 300,000 plus. That has grown more than six-fold in the last few years. There has been an explosion. The whole thing has ground to a halt our ability to process these claims. Everyone knows that come with a kid and we will release you into the United States," he said.

According to Quintana, "Libre is not a political party but a destabilizing movement. It was founded in 2011 by the former president of Honduras, Manuel Zelaya." She adds, "Zelaya is an ally of socialist governments in Latin America" like the Castro regime in Cuba.

She calls this caravan antic right out of the Left's disorder and chaos playbook.

It's unclear if President Trump will take unilateral action to really reduce foreign aid or if he will close the southern border and arm it with troops. Pentagon sources tell CBN News that 2,100 National Guard soldiers are working side by side with border patrol along the US-Mexico border, but so far the Pentagon has not received new orders to provide more troops for border security.

Could This Finally Solve the Border Crisis? US and Mexico Agree on Plan to Stop Border 'Assault'
CBN News Email Updates