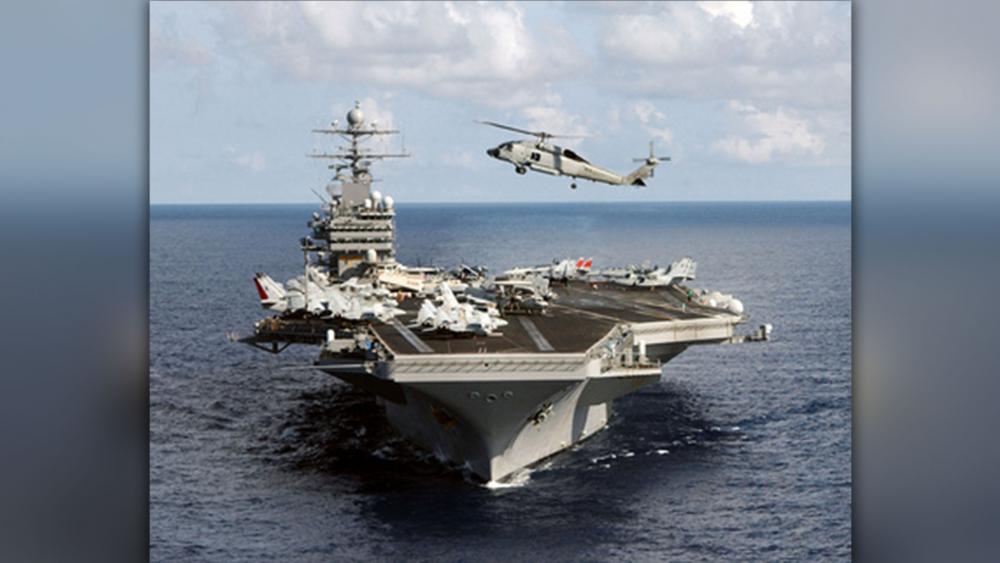 A Navy SH-60 Seahawk helicopter flies over the bow of the aircraft carrier USS Theodore Roosevelt (CVN 71) as the ship conducts a close quarters exercise in the Atlantic Ocean on July 15, 2005. (Image credit: US Department of Defense)

The captain of a US Navy nuclear aircraft carrier pleads with his superiors for help as he's trying to contain the spread of a virus on board his ship that's threatening his crew of 4,000 sailors. Even though it sounds like the plot out of a fictional Hollywood movie, it's actually happening right now, while the USS Theodore Roosevelt is docked in Guam.

In an exclusive story, The San Francisco Chronicle reports Capt. Brett Crozier wrote Navy officials asking for the resources to isolate his entire crew after 100 sailors became infected with the COVID-19 virus.

In his four-page letter, according to the newspaper, Crozier describes the situation aboard the Roosevelt as quickly deteriorating. The ship has remained in port for more than a week.

"This will require a political solution but it is the right thing to do," Crozier wrote. "We are not at war. Sailors do not need to die. If we do not act now, we are failing to properly take care of our most trusted asset — our Sailors."

In the letter to his superiors, Crozier said only a small group of the infected men have been taken off the ship.  The rest of the crew remain on board the carrier where following guidelines for 14-day quarantines and social distancing is impossible, according to The Chronicle.

"Due to a warship's inherent limitations of space, we are not doing this," Crozier wrote. "The spread of the disease is ongoing and accelerating." He asked for "compliant quarantine rooms" onshore in Guam for his entire crew "as soon as possible."

"Removing the majority of personnel from a deployed U.S. nuclear aircraft carrier and isolating them for two weeks may seem like an extraordinary measure. ... This is a necessary risk," Crozier wrote. "Keeping over 4,000 young men and women on board the TR is an unnecessary risk and breaks faith with those Sailors entrusted to our care."

Senior military officials said last week that the entire crew of the Roosevelt will be tested for the coronavirus.  The ship's home port is San Diego, CA.

The Chronicle reports by the time the ship docked in Guam last Friday, the number of cases on board had jumped from 25 to 36.

But by Monday, a senior officer on board the aircraft carrier told the newspaper that between 150 to 200 sailors had tested positive for the virus. None had been hospitalized yet, according to the unnamed source.

Chief of Naval Operations, Adm. Mike Gilday responded last week saying the Navy was taking this threat seriously and was working to halt the virus's spread. He underscored the two priorities would be caring for the sailors and continuing "mission readiness."

Lawrence Korb, a former assistant secretary of defense under President Reagan, told The Chronicle it was noteworthy for a ship's captain to write such a letter since an officer like Crozier could be on track to wear an admiral's stars.

"It shows that this is a person who is putting the welfare of his sailors ahead of his career," said Korb, a retired Navy captain.