With Nation Divided in the Middle of a Pandemic, Could We See Civil Unrest Following the Election? 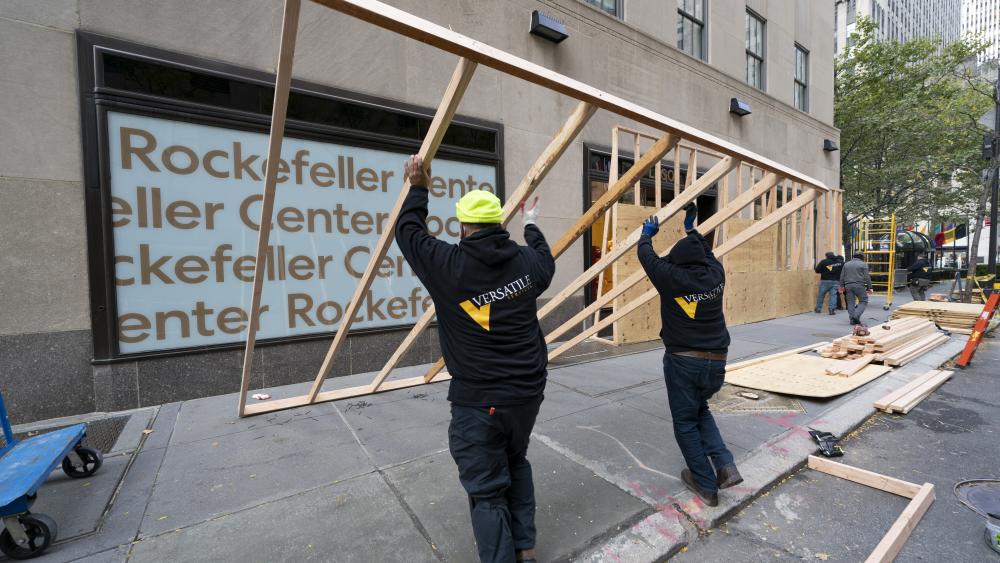 Workers erect a plywood wall Monday, Nov. 2, 2020, to protect a LEGO store in Rockefeller Center in New York, from possible vandalism ahead of Tuesday's contentious presidential election. (AP Photo/Mark Lennihan)
6206529181001
With Nation Divided in the Middle of a Pandemic, Could We See Civil Unrest Following the Election?

With the nation as divided as it is, and with a presidential election upon us, the possibility of unrest following the election is very real.

In fact, the threat level has been increasing, even some reports of potential plots to spark unrest after the election. Some experts say a large part of the problem is increased rhetoric. Part of the solution? Increased prayer.

It doesn't take much to recognize that there is extreme unrest in our country right now with the COVID-19 pandemic, racial unrest, and government opposition. The nation is divided along so many fault lines, and inserted in the middle of it is a major, contentious presidential election.

"Anyone who is responsible for that many deaths should not remain as President of the United States of America," Joe Biden declared during the last presidential debate in reference to the president's handling of the pandemic.

"Proud Boys, stand back and stand by," said President Trump during the first debate when asked repeatedly about denouncing white supremacy.

Authorities say even when there's no obvious activity, but factions are simmering beneath the surface.

The Armed Conflict Location and Event Data Project tracks conflicts all over the world including white supremacists groups in the US.

Their research follows nine major ones, ranking them in violence potential from low to very high. Groups like the Proud Boys and Boogaloo Bois rank very high. Some national security experts say the president has fanned the flames.

"Any person of faith or decency should be able to say there's no place for white supremacy in the United States period," said Brad Bowman, a national security expert. "And when the President of the United States has trouble saying that, we have a problem."

On the radical left, the group ShutDownDC has posted a plan entitled "Stopping the Coup, the Disruption Guide for 2020." It details shutting down the country and forcing President Trump from power if the presidential election is too close to call.

So how will this dangerous cocktail play out after Election Day?

Already crews in Washington, DC have been boarding up buildings in anticipation of potential disruption. Just this past weekend, there were at least two incidents of election-related chaos.

On Friday, a group of Trump supporters surrounded a Biden campaign bus in Texas, leading nervous Biden staffers to cancel an event.

In response, the president tweeted "I love Texas!"

Then on Sunday, a car caravan dubbed a "Trump Train" rolled through Richmond, Virginia, clashing with opposing protesters at the Robert E. Lee monument. Police say someone shot at an unoccupied vehicle, and one person was pepper-sprayed in the clash.

Lawyer and political commentator Van Jones says quelling post-election violence could boil down to one simple concession speech on either side.

"Moreover, that concession speech helps the tens of millions of people who voted for that person to accept the outcome," Jones said. "Acknowledge the winner, however begrudgingly, and then get up the next morning and go to work, go to school, maybe disappointed but not disloyal to America's government."

"We have to pray for God's will even if it may be different than what our will is or what we want," McDaniel said. "And then I would say beyond that, it's not just what is God's will, but again accepting not my will but your will. We should also pray that people would be able to see things in the way of rivals but not enemies.  We're still Americans."

Authorities in several states are gearing up for what could be post-election chaos, with National Guard troops on standby. They're hoping, though, the extra force won't be needed.