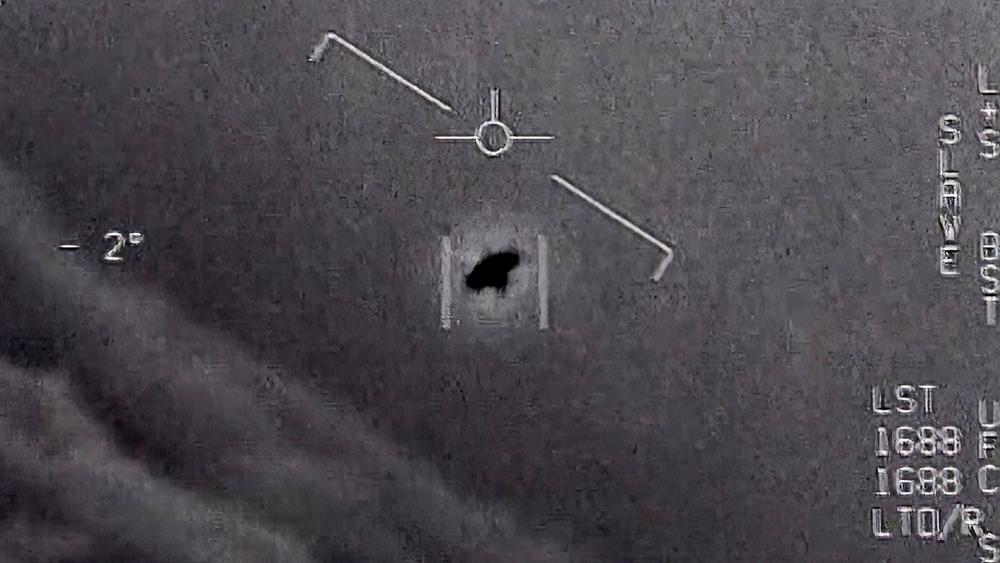 The image from video provided by the Department of Defense labelled Gimbal, from 2015, an unexplained object is seen at center as it is tracked as it soars high along the clouds, traveling against the wind. (Department of Defense via AP)
6266401363001
Investigative Reporter Explains Why UFOs Could Be Top-Secret Laser Tech Designed to Confuse Our Military

ABOVE: Investigative reporter Jeffrey Scott Shapiro appeared on CBN News' Faith Nation to explain how the technology is a clear threat to U.S. national security.

The release of a U.S. government report analyzing Unidentified Flying Objects or UFO activity is stirring up more questions than answers.

They include what's called Unidentified Aerial Phenomena (UAP) that seem to defy the capabilities of existing technology.

He contends that potential adversaries of the United States could be developing this technology to disrupt military flight systems and that the U.S. seems to be doing the same.

"I think it is a serious threat because these technologies were designed to possibly confuse our fighter pilots during combat aviation situations," Shapiro told CBN News. "So that if a pilot is flying in the sky, and they see possible enemy aircraft. The enemy aircraft could possibly have other images beside them so that our pilots can't actually tell what the real target is."

"And because this technology appears to be able to show up on different sensors, not only infrared but radar. It's quite possible our pilots would not be able to tell which target is the real one," he continued. "They may inadvertently fire a heat-seeking sidewinder missile at what is actually a hologram of an aircraft or a UFO, instead of an actual target firing on us."

When Shapiro was asked if he was speaking about the 2018 U.S. Navy patent for laser technology, he replied in the affirmative.

"Correct. There's a patent for the space-enabled Warfare System Center Pacific where they are using laser-plasma technology to project holographic images that would project sort of a type of Unidentified Flying Object in the sky," the investigative reporter explained. "And as you know, a lot of people, especially military personnel, are seeing these tic-tac-shaped or UFOs in the sky.  But a lot of times, their appearance seems to be grainy. We don't see where they land. We don't see where they take off."

"And so, if there was a laser image projecting a hologram, that could not only explain those factors, it could also explain a lot of these images seem to be able to move in a very erratic fashion that defies our laws of physics," Shapiro noted.