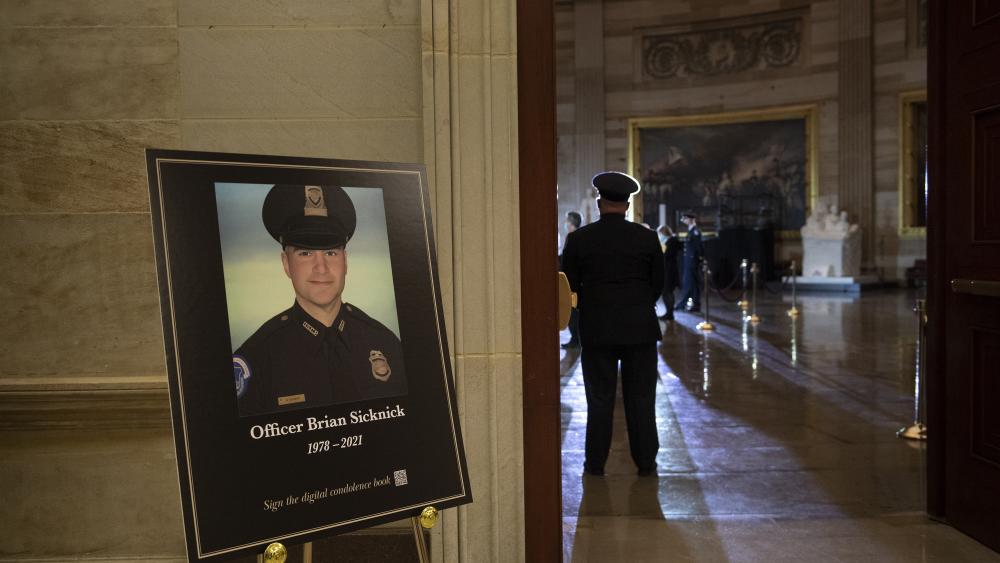 FILE - In this Feb. 2, 2021, file photo a placard is displayed with an image of the late U.S. Capitol Police officer Brian Sicknick. (Brendan Smialowski/Pool via AP, File)

WASHINGTON (AP) — U.S. officials have arrested and charged two men with assaulting U.S. Capitol Police officer Brian Sicknick with bear spray during the Jan. 6 riot, but they do not know yet whether it caused the officer’s death.

George Tanios, 39, of Morgantown, West Virginia, and Julian Khater, 32, of Pennsylvania, were arrested Sunday on an array of charges, including assaulting a federal officer with a dangerous weapon, conspiracy and other offenses. The idea that Sicknick died after being sprayed by a chemical irritant has emerged in recent weeks as a new theory in the case.

The arrests are the closest federal prosecutors have come to identifying and charging anyone associated with the deaths that happened during and after the riot. Five people died, including a woman who was shot by a police officer inside the Capitol. But many rioters are facing charges of injuring police officers, who were attacked with bats, sprayed with irritants, punched and kicked, and rammed with metal gates meant to keep the insurrectionists from the Capitol.

Investigators initially believed that Sicknick was hit in the head with a fire extinguisher, based on statements collected early in the investigation, according to two people familiar with the case. But as they’ve collected more evidence, the theory of the case has evolved and investigators now believe Sicknick may have ingested a chemical substance — possibly bear spray — that may have contributed to his death, officials have said.

Sicknick and other officers were standing guard behind metal bicycle racks as the mob descended on the Capitol on Jan. 6.