'Point of Vulnerability': The US Lags Behind the World in Protecting Millions of Miles of Undersea Cables 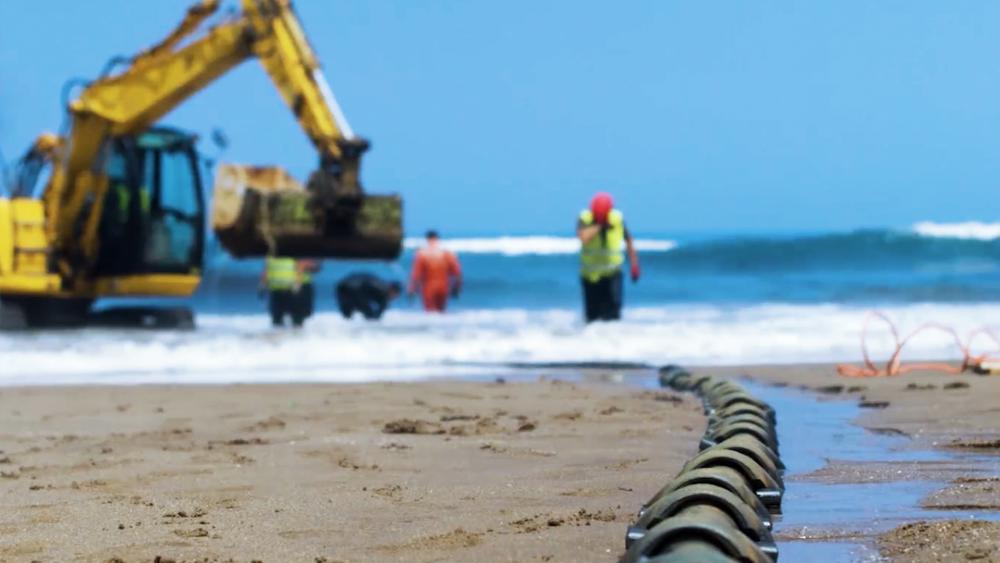 6315229172112
'Point of Vulnerability': The US Lags Behind the World in Protecting Millions of Miles of Undersea Cables

When you look out over the ocean, you don't often think about what's under the surface. Millions of miles of fiber-optic cables, not much larger around than a garden hose, crisscross the world's oceans. They're responsible for transmitting an estimated 95% of global internet traffic.

"Fiber-optic cables, cables across the ocean, are not new. We've had them since the mid-1800s," former US deputy national security advisor Nadia Schadlow told CBN News. "Different forms, copper. But over the years as data has become more and more important, as we become a more digital, globalized world, more data flows under the sea."

As of 2022, there are approximately 530 active, submerged cables running all over the globe. In addition to transmitting texts and emails, they also send confidential information like financial transactions and government communications.

Without this tech pipeline, the internet wouldn't function and our digitally driven societies would grind to a halt. Schadlow says protecting these cables and their data needs to become more of a priority.

"Anytime an economy is so dependent on infrastructure or a particular sector, it becomes strategic. It becomes a point of vulnerability. So our adversaries and competitors recognize this," she said.

US adversaries also recognize the cables themselves are incredibly vulnerable.

"Many people will be aware that the actual fiber optic is about the diameter of a human hair. So there might be a couple of dozen fibers inside a cable. But most of the cable is basically to protect the fiber which is made out of glass. So it's very, very fragile," said Gavin Tully, an engineer and partner at a firm specializing in sub-sea cables.

He says this internet infrastructure is also at risk from fishing trawlers and even natural disasters.

"About 10 months ago, there was a massive volcanic eruption in Tonga. And that eruption created a lot of earthquakes and landslides that cut all the cables to Tonga. So Tonga was basically without communication for weeks because the ash cloud also bought the backup satellite paths," Tully said.

In October, cable damage near the Shetland Islands north of Scotland led to suspicion that an adversary might be trying to make sabotage look like an accident. That's because a Russian "research" vessel, designed to survey the sea floor, was reportedly in the area at the time.

It wouldn't be the first time an enemy severed a country's communications.

"During World War I, England cut all of Germany's sub-sea cables, which were telegraph cables at the time," Tully said.

Russia's war with Ukraine and this summer's Nord Stream pipeline incident served as a wake-up call for many of our allies. France proposed spending more than 3,000,000 Euros for "ocean floor defense" in its 2023 budget. Italy and the UK are also reportedly working to increase surveillance of their underwater cables. And Taiwan is now taking protective measures to ensure communications to the island aren't knocked out by a natural disaster or conflict with China.

Meanwhile, here in the US experts are concerned the government isn't doing enough.

"We need to develop a better public-private approach toward understanding when these cables come under threat, so to share information more effectively, to also probably fund more cable repair ships as well," Schadlow said.

Most cables running to and from the United States are owned by either telecom carriers or private companies. Over the past few years, it's been predominantly content providers like Google, Facebook, Microsoft, and Amazon investing in new lines.

Schadlow says while the owners are ultimately responsible for security and repairs, the government should be involved as well given national security interests.

CBN News reached out to Google for information about how they protect their cables. A spokesperson responded that the best protection against disruption is having a variety of redundant network paths so they're not reliant on one single cable.

"So the idea is basically creating a global mesh of these types of cables so that if one gets damaged or cut, whether it's on purpose for sabotage, or accidental, or a natural disaster, it doesn't have significant effect on the global economy," Tully said.

Another vulnerability in our internet infrastructure comes when the data flowing through undersea cables reaches land. It's at this point where the information is offloaded. In 2021, the US office of the director of national intelligence classified the possibility of cyberattacks against cable landing stations as a "high risk" to national security.

"Someone breaks into a building. Someone can perhaps tap into the electronics. Of course, these types of locations are typically somewhat hardened. Most of them are actually hidden in plain sight so they really don't look like suspecting targets," Tully explained.

Finally, countries like China could use state-owned companies to sabotage parts of these undersea networks. Huawei Marine, for example, has built or repaired almost a quarter of the world's cables. Some experts already worry Beijing could have tasked them with spying on data coming through.

"We need to be able to provide alternatives to countries and companies that look to Huawei Marine for their components. Similar to the situation with 5G. We didn't like Huawei controlling that infrastructure," Schadlow said.

While conversations are being had in Congress about securing our internet infrastructure, national security experts like Schadlow say they've seen no significant action. Still, the data sent through these cables grows more and more sensitive, making it more enticing to our enemies and more vital to protect.