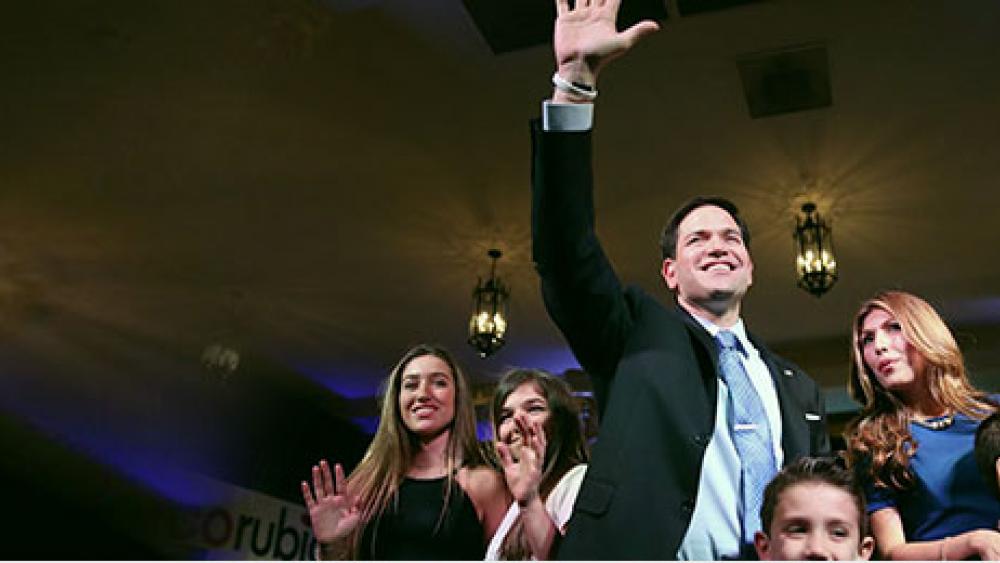 WASHINGTON -- Nearly eight years have passed since a young Democrat named Barack Obama captured the White House. Now, another up-and-coming politician has a chance to take a similar path.

This time it's a Republican and his name is Marco Rubio.

The Florida senator sees Iowa as the first stop on his road to 1600 Pennsylvania Avenue. It's the ultimate American dream, and for this 43-year-old, the future is now.

"I've been told, 'Why don't you wait? You could be the candidate of the future.' And I say, 'Well that's good news because this election is in the future,'" Rubio told a hundred gatherers at a local house party in Iowa.

That philosophy of the future will be the centerpiece of his presidential run. His campaign theme is "A New American Century." While on the road in Iowa, Rubio told CBN News his overall plan.

"We have to have policies, tax policies, regulatory policies, debt policies, healthcare policies that make us globally competitive," he explained.

"We are engaged in a massive global competition for investment and for innovation and we are falling behind because our government has policies that are holding us back," he charged.

Rubio supporters see him as American success story. Raised in a Spanish-speaking home to Cuban-born parents, he grew up in a working class family. After arriving in America, both parents worked hard.

Their rich family spirit made up for any financial shortcomings. It's a lesson that sticks with the young senator to this day.

A strong faith is also key. He grew up Roman Catholic, though at one point the family tried Mormonism. Rubio says that didn't feel right.

"As I got more theologically aware and more engaged and learning about Catholicism, I wanted to go back and so we did," Rubio recalled. "I did first communion on Christmas Day in 1984. That was probably in 7th or 8th grade."

As a young adult, Rubio admits he fell away from his faith so his wife started attending a Baptist church. They went there for a number of years, but eventually Rubio felt a tug back to his Catholic roots.

"In an ironic way, the more I learned about the written Word, the more I fell in love with the Roman Catholic teachings and we ended up going back to that church," he told CBN News.

"And so today we're in a place where we are Roman Catholics, fully aligned with the theology and the Magisterium, the teaching authority of the Church  but also with a tremendous appreciate for, and often interaction with our brothers and sisters in Christ who attend other denominations," he said.

"If you think about it, we are at the water's edge of the argument that mainstream Christian teaching is hate speech," Rubio told CBN News. "Because today we've reached the point in our society where if you do not support same-sex marriage you are labeled a homophobe and a hater."

"So what's the next step after that?" he asked.

"After they are done going after individuals, the next step is to argue that the teachings of mainstream Christianity, the catechism of the Catholic Church is hate speech and there's a real and present danger," he warned.

Rubio said he's ready to face danger, here and around the world.

"You don't want to be engaged in every conflict on the planet. We're not the world's policemen," he said. "But I question - what would happen in the alternative? If America doesn't lead, what happens? Well, what happens is chaos."

A Bumpy Road Ahead

His positions and early standing in the polls put Rubio in a good position even this early in the race. His backers like a General Election scenario of a young Marco Rubio vs. Hillary Clinton, who's been around awhile.

He does face some challenges with the base though - specifically his work with Democrats on comprehensive immigration reform, something that he knew could hurt his chances of becoming president when he discussed this issue with CBN News two years ago.

That moment crystalized the importance of family in Rubio's life.

"I believe that at home my most important job is to be a husband to my wife and a father to my children. If I can't do that right, I can't lead a nation," he told CBN News.

As for president, he'll leave that up to the American people and almighty God.

"Ultimately my view of it is you go out and do the very best you can and ultimately it's going to turn out the way voters and God decide," he said.