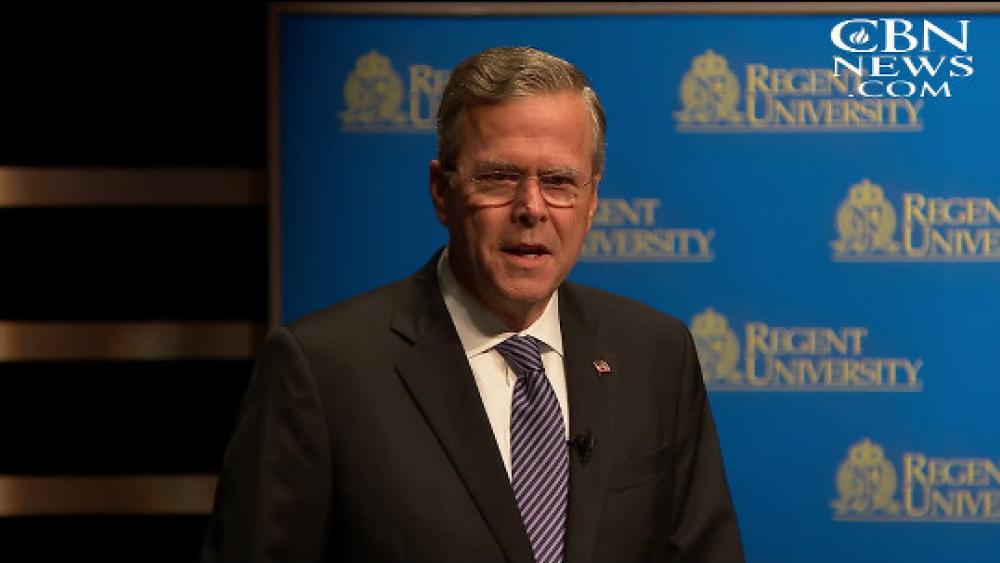 Bush was on hand for one of Regent's Presidential Candidate Forums.

Just one year ago, political experts were fairly united that 2016 would involve a battle of "dynasties" -- Hillary Clinton for the Democrats and Jeb Bush for the Republicans.

But the field now includes a number of other players including Republican front-runner Donald Trump. But Bush is perfecting his campaign message.

And for the university audience that campaign message was a message of faith.

Bush told the audience more about his faith journey from his early years as a child being taken to church on Sundays.

He says he accepted Jesus in the 1980's and that his faith plays an integral role in his politics.

He later converted to Catholicism to join his wife and children in the church where they had been worshipping together. Bush has said before that the Catholic Church helped "ground" his life.

"How do you put aside your faith on the important issues that truly matter," he asked. "I believe that people of faith should act on your faith and be informed by your faith."

The two term Florida governor shared that his faith drives his believes regarding life issues.

"Life is a gift from God and that it is precious and should be protected from beginning to end," he said.

Bush is a candidate that boldly supported the defunding of planned parenthood and believes that the funds should be redirected in women's health organizations. He says he saw it defunded in the state of Florida while he was governor.

According to a January 2003 report in The St. Petersburg Times, Planned Parenthood of Southwest and Central Florida lost $124,000 in state funds. Bush diverted the funds to abstinence-only educational programs.

He also told his audience that he believes in the power of "subsidiary."

"We should shift power back to the commmunties," Bush went on to explain.

"Everytime we outsource the responsibility of taking care of a neighbor we make the government bigger," he said.

One reoccuring theme during his speech was returning power back to people. "Government should not be our master," he said, "...it should be our servant."

Lastly, Bush emphasized the importance of maintaining religious freedom. "People of faith need to stand on principle to protect the first freedom of the greatest country on the face of the earth".

Q & A with Pat Robertson

Robertson cut right to the chase and asked, "What would be the first thing you do as President?"

Bush replied, "Within the first week you need to use the power of the executive authority you have because working with Congress is going to take a little bit of time." "The dysfunctional relationship with Congress needs to be fixed."

Bush told Robertson the U.S. must take action diplomatically and in helping the right factions in the Middle East.

"You need to have a strategy that arms the , that reengages with the Sunni tribal forces,that is engaged with the military and where this is a clear objective of pushing ISIS out of Iraq. Then the hard work begins as it relates to Syria."

During the forum audience members sent in questions to Bush. Bishop Harry Jackson, with the High Impact Leadership Coalition,  asked Bush his agenda is for the urban community.

Bush explained that securing communities, rebuilding trust with law-enforcement, supporting strong families with mothers and fathers in the home, and making sure children, regardless of their economic status, get a quality education.

"There should be no tolerance for the mediocrity or the abject failure that exists in inner city schools.We should all believe that that is a huge value for our country."