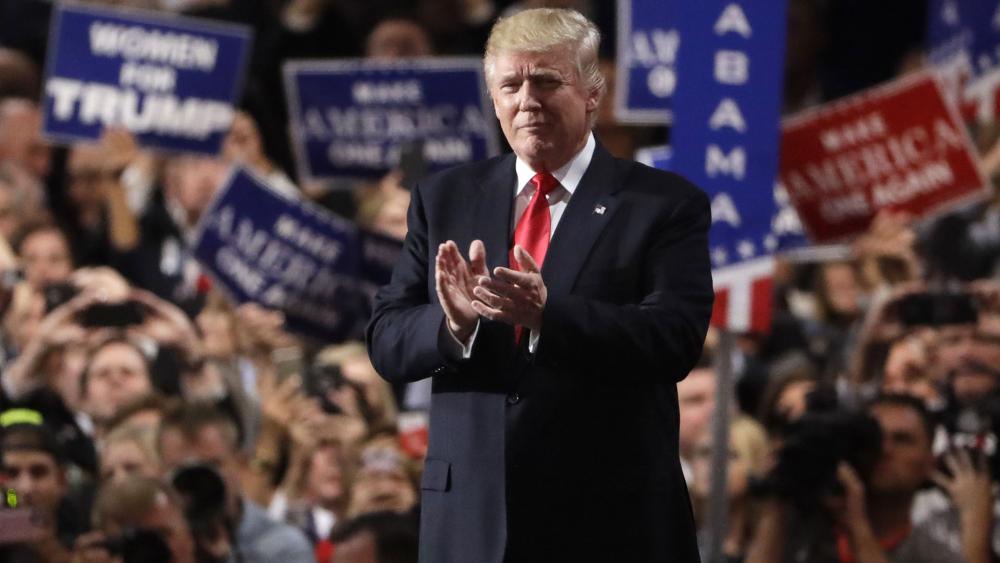 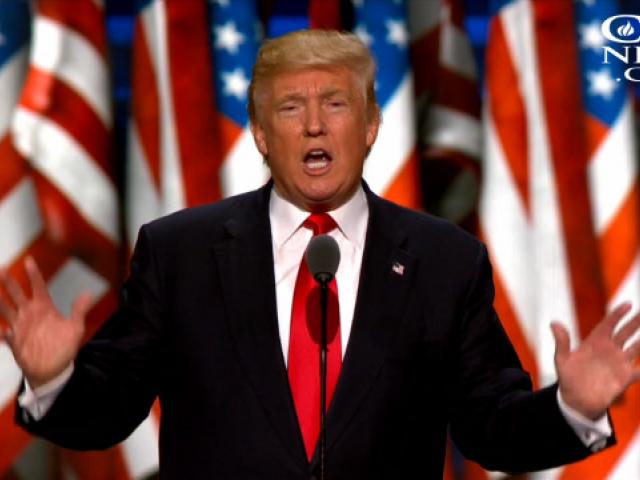 With emotion in his voice, Donald Trump officially accepted the nomination for president of the United States Thursday evening at the Republican Convention.

"I humbly and gratefully accept your nomination for presidency of the United States," he said. "We are a team," he continued.

Trump described his vision for America Thursday night throughout his entire speech.

"We can't afford to be politically correct anymore."

"If you wanna hear the corporate spin the Democrats are holding their convention next week - go there," Trump said.

"Here there will be no lies, we will honor the American people with the truth and nothing else," he continued.

"Together we will lead our party back to the White House, and our country back to safety prosperity and peace. We will be a country of generosity and warmth. We will also be a country of law and order," he said at one point.

Trump said that the convention is occurring at a "moment of crisis," and that any politician who does not understand the danger of our nation's current status is not fit to lead the country.

Violence, debt, national security and employment were among the many problems Trump addressed.

"Americans watching this address tonight have seen the recent violence in our streets and communities. The crime and violence will soon and very soon come to an end," he told his party.

He assured the audience that things would change for the better "when" he's elected.

"On January 20th 2017 safety will be restored," Trump told supporters.

From the LGBTQ community to the police Trump promised to protect each group from the "hateful" terrorists that have taken lives and destroyed families referring to attacks in Orlando, Dallas and in other parts of the nation.

Although critics have questioned his loyalty and knowledge of the state of Israel, Trump did not forget to include America's greatest friend when discussing foreign relations and having a strong presence in other parts of the world.

"This includes working with our greatest ally in the region, the State of Israel," Trump said receiving generous applause.

He also did not neglect the Christian community.

"I would like to thank the Evangelical and religious community in general," he said.

He told fellow Republicans that the Evangelical Christian support he's received recently has meant a lot to him... even though he "wasn't sure he deserved it."

Evangelicals were definitely on-hand at the convention.

Tony Perkins, with the Family Research Council, said he was appearing and speaking as a citizen and not for his organization. However, he went on to say that he was voting for Trump in November indirectly addressing the concerns that still linger with some Christians about voting for Trump.

Liberty University's Chancellor, Jerry Falwell, Junior took the stage and also shared his approval of Donald Trump as president, calling him one of the "greatest visionaries of all time."

CBN recently held an interview with James Dobson, the founder of Focus on the Family, which is the well known Christian organization that actively promotes conservative values.

Dobson told CBN he is on the religious committee the Trump campaign has established, in order to advise Trump on Christian values.

Along with Dobson, other leaders on the board include, Michelle Bachman, and Jerry Falwell.

"If I can emphasize anything for the CBN viewers and listeners, it is to be in prayer," Dobson said.

He also stated that America is "hanging in the balance," continuing to say how important the upcoming election is. Dobson said we need leaders who are strong and acquainted with our Heavenly Father.

Before Trump took the stage to officially accept the Republican nomination, Dobson finally endorsed him.

"I have decided to endorse Donald J. Trump for President of the United States, not only because of my great concern about Hillary Clinton,” Dobson said. “I am supporting Mr. Trump primarily because I believe he is the most capable candidate to lead the United States of America in this complicated hour.”

Trump has been seen to surround himself with evangelicals, especially Falwell, Jr. over the past few months.

Falwell, said Trump was the country's blue collar billionaire, and has created jobs for thousands.

He also reminisced on his father, Jerry Falwell Senior who stood in the same place endorsing Ronald Reagan decades ago.

Falwell Jr: "A decision not to vote or to vote for a third-party candidate is a de facto vote for Hillary Clinton" https://t.co/Kfxy4jryMC

Trump says his proposal to build a wall along the U.S.-Mexican border is a way of taking a hard line on immigration laws - and he says that approach is "considerate and compassionate to everyone."

Trump says his tough approach will stop the cycle of human smuggling and "peace will be restored by enforcing the rules."

However he emphasized that American citizens will be the priority, highlighting the recent incidents American's have faced from illegal immigrants and the rise in crime.

His daughter, Ivanka spoke before introducing him.

"My father not only has the strength and ability to be our next president, but the kindness and compassion our country needs," she said.

"One year ago I introduced my father when he declared his candidacy… he sacrificed greatly entering the political arena as an outsider."

However, she said, Trump made the "impossible" claims of him being successful in the political arena false.

Ivanka told the audience how her father motivated her to think big, "My father used to tell me, 'Ivanka you will be thinking anyway so you might as well think big.'"

"He spent his whole life doing what others said could not be done. He dug deeper, worked harder, got better and became stronger."

"I have seen him fight for his family, employees, company and now our country."

Trump's daughter made sure to not leave out the demographics at the Trump organization saying their company has more female than male executives. She also said they are paid equally.

His campaign has made a large effort to shine the light on women involved in the "Trump movement" in hopes of winning female voters from Hillary Clinton.

Trump made history in record numbers when it comes to votes for the Republican nomination.

With his promise and campaign slogan "Make America Great Again," Trump secured over 14 million votes, while creating a movement that resonated across the nation drawing people to his campaign and ultimately to the Republican party.