Trump Won't Quit Amid Calls to End Bid for Presidency 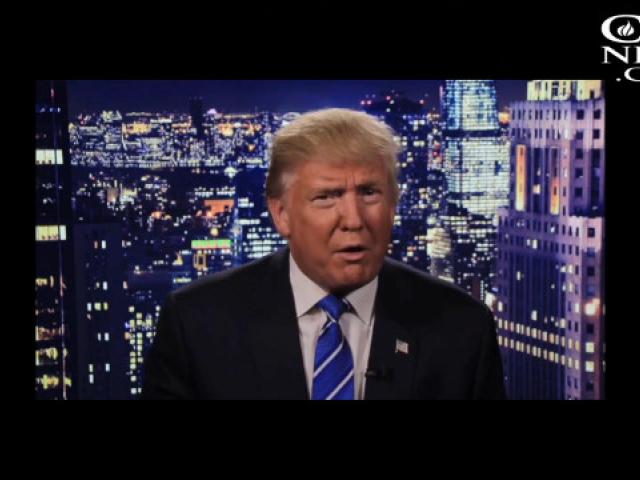 Republican presidential nominee Donald Trump insisted Saturday he would "never" abandon his White House bid. He is facing a significant backlash from Republican leaders who are calling him to quit after a 2005 "Access Hollywood" video surfaced showing him making inappropriate comments about women.

Trump offered an apology late Friday night for the video. In it, he and host Billy Bush, who is now an NBC "Today" show host, had the offensive conversation about women.

CBN News will not go into specific details due to the nature of the language.

"I've never said I'm a perfect person nor pretended to be someone that I'm not. I've said and done things I regret and the words released today on this more than a decade-old video are one of them," Trump said in a video statement.

"Anyone who knows me knows these words don't reflect who I am. I said it, I was wrong and I apologize," he also said.

Trump made the statement just ahead of the second presidential debate on Sunday, and with the election one month away some Republicans are turning their back on the candidate.

"I can no longer look past this pattern of behavior and inappropriate comments from Donald Trump," Rep. Joe Heck, R-Nev., said. He is in a tight race for the Nevada Senate.&

"My wife, my daughters, my mother, my sister and all women deserve better. The American people deserve better," he told supporters at a rally Saturday with Mitt Romney.

Trump declared he would not yield the GOP nomination under any circumstances.

He vowed to go after Hillary Clinton for her treatment of women who have had affairs with Bill Clinton. It's a course of action his party has advised him against, according to The Hill.

The release of the videotape has completely overshadowed the release of thousands of emails from Clinton campaign chairman John Podesta, which reveal the contents of some of her previously paid speeches to Wall Street.

The excerpts, posted by WikiLeaks, included Clinton suggesting that Wall Street insiders are best equipped to help reform the financial sector. She also mentioned that she favored "open trade and open borders." This is completely at odds with the stance she has taken during the primary campaign.

Meanwhile, Trump's running mate Mike Pence has made a statement about the "Access Hollywood" video.

"As a husband and father, I was offended by the words and actions described by Donald Trump in the 11-year-old video released yesterday," he said. "I do not condone his remarks and cannot defend them."

"We pray for his family and look forward to the opportunity he has to show what is in his heart when he goes before the nation tomorrow night," the Indiana governor added.

Pence was scheduled to replace Trump at a joint appearance with Speaker Paul Ryan at a campaign event in Wisconsin, but he pulled out at the last minute.