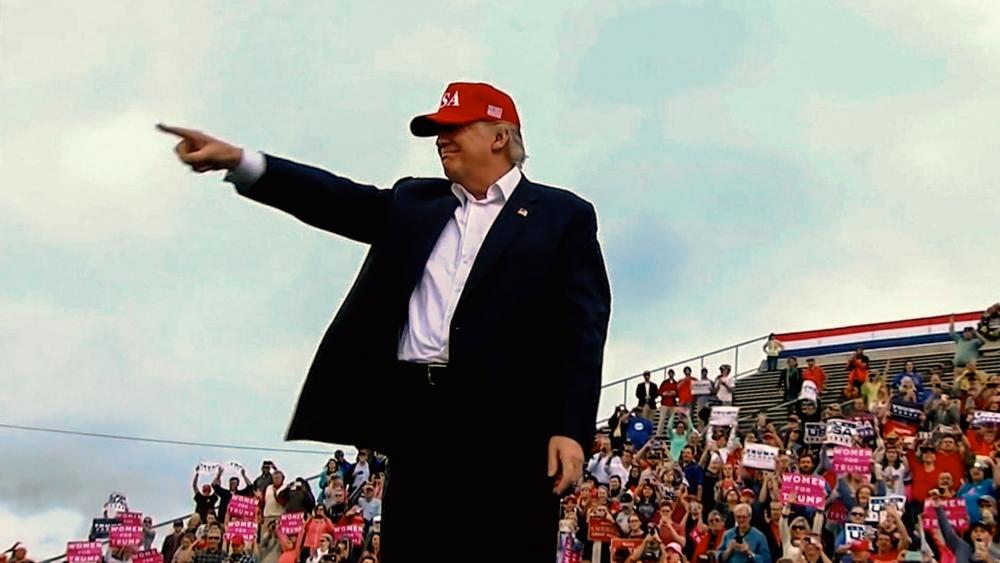 HARRISBURG, Pa. (AP) - President Donald Trump on Saturday marked his 100th day in office by claiming historic action on his agenda, renewing promises on health care and taxes and attacking the news media for misleading Americans.

In his morning radio address Trump issued an assurance: "My only allegiance is to you, our wonderful citizens." To supporters at an evening rally in Pennsylvania, he promoted American power and patriotism while emphasizing such priorities as American manufacturing, better trade deals for the U.S. and a still-to-be defined tax cut plan.

Trump's 100th day events were set in a politically important state that he won with 48 percent of the vote. It was the first time Pennsylvania had voted for a Republican presidential candidate since George H.W. Bush in 1988.

Trump visited the AMES Companies in Pennsylvania's Cumberland County, a shovel manufacturer since 1774. With that backdrop he signed an executive order directing the Commerce Department and the U.S. trade representative to conduct a study of U.S. trade agreements. The goal is to determine whether America is being treated fairly by its trading partners and the 164-nation World Trade Organization.

Trump's rally Saturday night in Harrisburg offered a familiar recapitulation of what he and aides have argued for days are administration successes, including the successful nomination of Neil Gorsuch to the Supreme Court, his Cabinet choices and the approval of construction of the Keystone XL pipeline.

But the president began the rally on a sour note, pointing out that he was not attending that night's White House Correspondents' Association dinner and issuing a scathing attack on the news media. To cheers, he accused the news media of "fake news" and said if their job was to be honest and tell the truth, then they deserved "a big, fat failing grade."

"I could not possibly be more thrilled than to be more than 100 miles way from Washington's swamp," he said, "spending my evening with all of you and with a much, much larger crowd and much better people, right?"

Meanwhile, North Korea's missile launch Saturday signaled its continued defiance against the U.S., China and other nations, on which Trump tweeted: "Bad!" Asked during an interview for CBS' "Face the Nation" if military action would follow a nuclear test by the North, Trump responded: "I don't know. I mean, we'll see."

At the 100-day mark, polls show that Trump's supporters during the campaign remain largely in his corner. Though the White House created a website touting its accomplishments of the first 100 days, Trump has tried to downplay the importance of the marker, perhaps out of recognition that many of his campaign promises have gone unfulfilled.

"It's a false standard, 100 days," Trump said while signing an executive order on Friday, "but I have to tell you, I don't think anybody has done what we've been able to do in 100 days, so we're very happy."

A failed effort to overhaul President Barack Obama's health care law behind him, Trump is turning to what he's billed as the nation's biggest tax cut. It apparently falls short of Reagan's in 1981, and tax experts are skeptical that the plan would pay for itself, as Treasury Secretary Steve Mnuchin has claimed.

"Together we are seeing that great achievements are possible when we put American people first," Trump said in his weekly radio and internet address. "That is why I withdrew the United States from the Trans-Pacific Partnership. That day was a turning point for our nation. It put the countries of this world on notice that the sellout of the American worker was over."

He said in his remarks: "In just 14 weeks, my administration has brought profound change to Washington."

Executive orders in line to be signed Saturday would be the 31st and 32nd since Trump took office __ the most of any president in his first 100 days since World War II. During the campaign, Trump railed against Obama's use of orders, which don't need congressional approval.