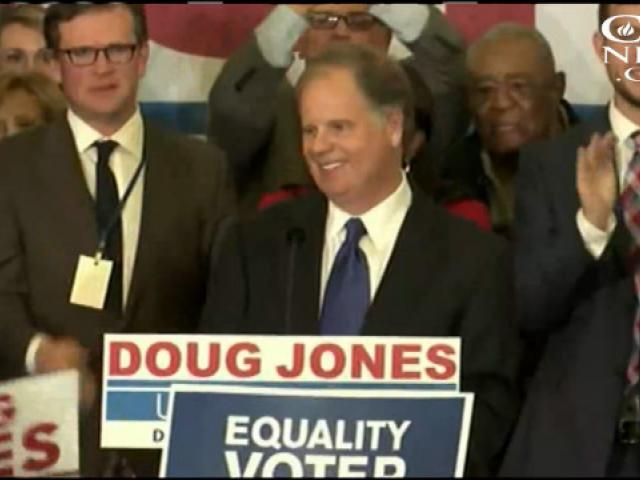 Jones' surprising victory will narrow the slim Republican majority over Democrats in the Senate to 51-49. He is the first Alabama democrat to be elected in 25 years.

"Alabama has been at a crossroads in the past. Tonight, ladies and gentlemen, you took the right road," Jones said during his victory speech. He also encouraged Alabamians to reach across the political aisle and embrace unity.

"I have always believed that the people of Alabama have more in common than divides us," Moore said. "At the end of the day, this entire race has been about dignity and respect."

Jones, who is known for his radical pro-choice stance, served as an attorney in Alabama and prosecuted two members of the KKK for the 1963 bombing of the 16th Street Baptist Church in Birmingham.

Roy Moore thanked his supporters Tuesday night, saying "it's not over."

"I really want to thank you for coming tonight and realize when the vote is this close that it's not over," Moore said. "And we still got to go by the rules about this recount provision and Secretary of State has explained it to us...But we also know that God is always in control. You know, part of the thing -- part of the problem with this campaign is we've been painted in an unfavorable and unfaithful light," he added.

A major factor in Roy Moore's stunning loss Tuesday night is the onslaught of sexual misconduct allegations he has faced in recent weeks.

Even though Moore vehemently denied sexually abusing minors in his thirties, the allegations changed the course of the race from being an almost certain Republican win, to a historic victory for Democrats.

Senate Minority Leader Chuck Schumer sent out a statement about Jones' win, calling him a "great candidate. He also slammed Roy Moore, saying he "never should have gotten to the Senate."

"Doug Jones will be an outstanding senator who will represent Alabama well. He was a great candidate and will be an even better senator," Schumer said. "Roy Moore was an awful candidate and never should have gotten to the Senate. But make no mistake about it, just like in Virginia, Democrats are energized, focused on the middle class and those struggling to get there, and things are looking better and better for 2018."

During the campaign, President Donald Trump blasted Jones and endorsed Moore as other top Republicans called on the candidate to drop out, saying he needed a Republican seat to advance his agenda.

"The people of Alabama will do the right thing... Roy Moore will always vote with us," President Trump tweeted before Tuesday's race. Doug Jones is Pro-Abortion, weak on Crime, Military and Illegal Immigration, Bad for Gun Owners and Veterans and against the WALL," he added.

However, President Trump congratulated Jones shortly after his win, while offering hope to Republicans.

Congratulations to Doug Jones on a hard fought victory. The write-in votes played a very big factor, but a win is a win. The people of Alabama are great, and the Republicans will have another shot at this seat in a very short period of time. It never ends!