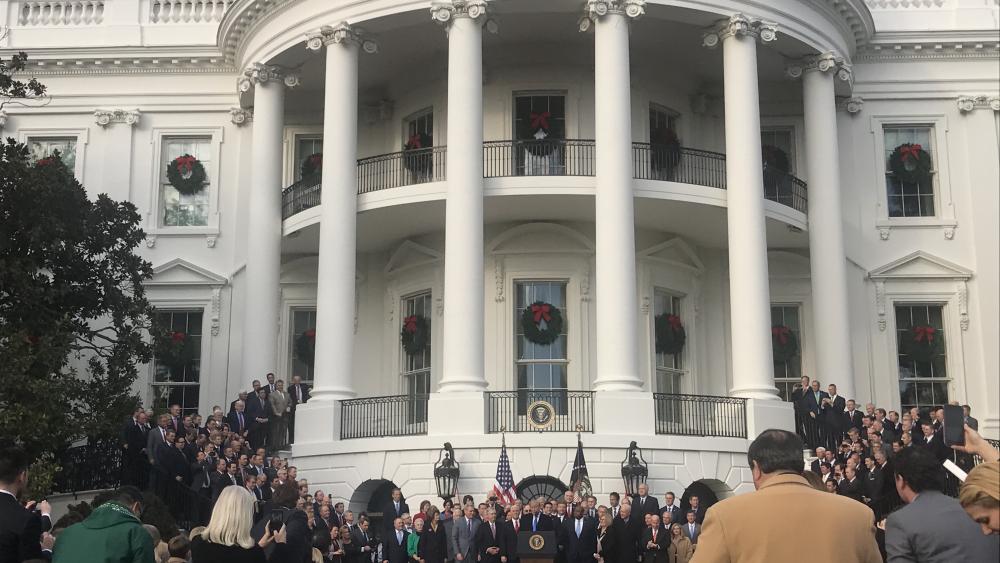 WASHINGTON – Republican lawmakers boarded a bus and traveled from Capitol Hill to the White House to celebrate passage of its tax reform package.

GOP members of Congress passed the Tax Cuts and Jobs Act Wednesday afternoon. The House was forced to redo Tuesday's vote after three provisions in the law were found to be in violation of Senate rules.

The legislators joined President Donald Trump on the South Lawn of the White House for a speech after the victory.

"Hasn't been done in 34 years, but really hasn't been done," said the president. "It's the largest tax cut in the history of our country. Really something special."

"It's very simple… we are making America great again," Trump said to applause. "We essentially appealed Obamacare because we got rid of the individual mandate, which was horrible."

"It's always a lot of fun when you win," Trump said while thanking the "team" he says helped make it happen – specifically Ryan and McConnell.

The president then asked members of Congress to speak as well.

McConnell thanked the president for his accomplishments overall.

"We have cemented the Supreme Court right of center for a generation," declared McConnell.

"This is a plan we can be proud of," said Scott.

Scott pointed to parts of the act he claims will bring money to poor communities. He also praised Ivanka Trump and Sen. Marco Rubio, R-Fla., for their push for an increase to the Child Tax Credit.

Ivanka Trump took to Twitter to celebrate the victory.

Today marks a great win for all Americans. The Tax Cuts and Jobs Act provides $5.5 trillion in tax cuts, $3.2 trillion, or nearly 60 percent, of which go to families. #TaxReform @HouseGOP @SenateGOP

Democrats are vowing to use this tax cut as leverage in the 2018 midterm elections. They say the real winners are the rich and not the middle class.

Can someone help me with vocabulary? I am not smart enough to know what to call a wave that is larger than a tsunami. Because that's what is going to happen next year when Republican legislators get fired en masse by the voters. #WednesdayWidsom https://t.co/UXGMKgzYj0