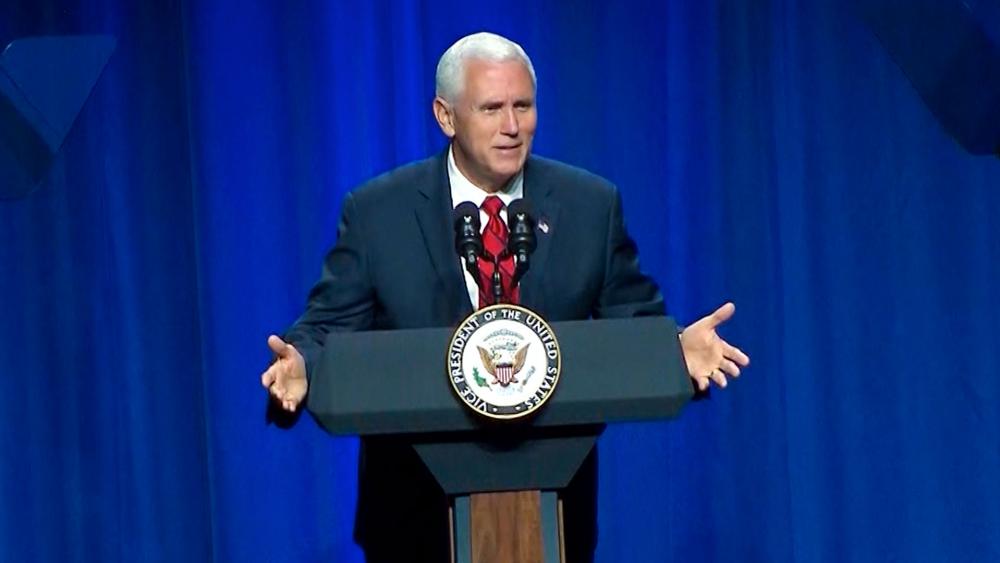 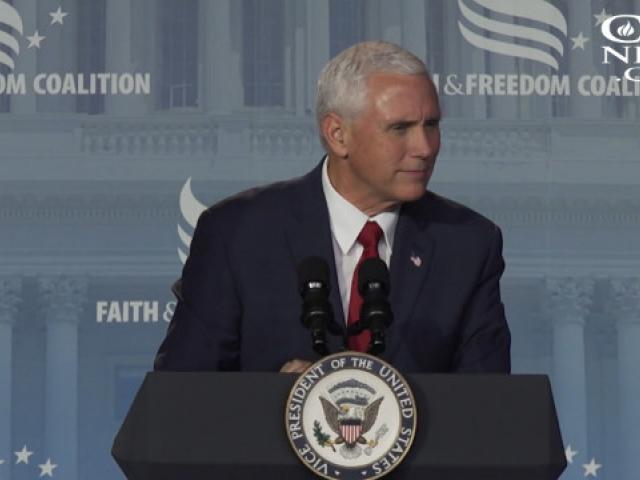 WASHINGTON – Vice-president Mike Pence took to the stage at the Faith and Freedom Coalition’s Road to Majority conference in DC and revved up the crowd with a campaign style speech.

“As the good book says, if you owe debts pay debts. If honor then, honor. If respect then respect. I’m really here just to pay a debt, to pay a debt of gratitude to all of you that helped elect a president that is fighting every day to restore freedom in the country and to make this country great and strong once again,” said Pence thanking the crowd.

Speaking to the group of mostly conservative voters, the VP trotted out a list of President Trump’s cabinet appointees he says should make them proud.

Staying away from the rumors and palace intrigue that has plagued the president this week, the Vice-President focused on the administration's commitment to keep its campaign promises.

"When President Donald Trump signs a bill to repeal and replace Obamacare, we will defund Planned Parenthood,” Pence promised.

He also urged the group to pray.

"Pray for America...and when you pray, pray with confidence," said Pence.

Event organizers say the Road to Majority conference gives policy makers a chance to get up close and personal with the group that launched them into office.

A key adviser to the president spoke with CBN NEWS, emphasizing the administration’s dedication to a conservative agenda.

“This agenda has not stalled. You have leader McConnell working very hard with his team in the United States Senate to get the second part of healthcare reform passed through his chamber. We expect that can even happen as soon as this month, or maybe this summer,” assured Trump Counselor  Kellyanne Conway.

Event organizers say the purpose of this conference is to equip faith voters with the tools to be effective citizens.

Last year Faith and Freedom volunteers knocked on more than 1.2 million doors to turn out the faith vote.

The three-day event closed out by honoring a stalwart defender of faith in the public square, Dr. James Dobson, founder of Focus on the Family.  Dobson, who is now the founder of Family Talk, was presented with the Winston Churchill Lifetime Achievement award.

Attendees celebrated his 40 years in ministry and service to five US presidents.

Dobson reminded voters of their obligation to pass on conservative ideas to the next generation.

“We need to do that for our sons and daughters because the moral issues are even poorer understood than before,” said Dobson.

It was the culmination of a three-day call to motivate the conservative base and ready them for the next big election.