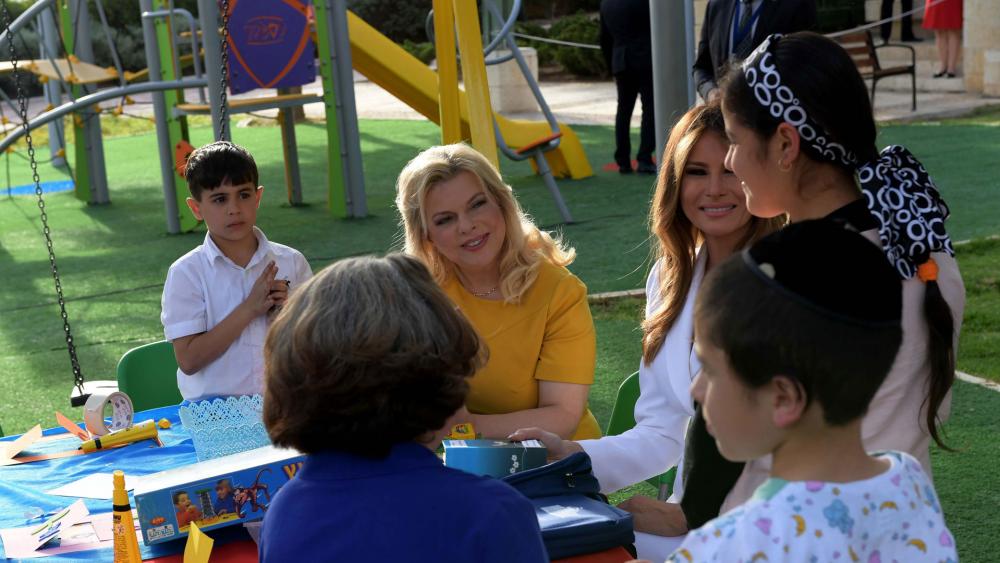 U.S. first lady Melania Trump visited Hadassah Medical Organization, Monday, a hospital that has both Israeli and Palestinian doctors as well as patients.

Her hostess, Sara Netanyahu, the wife of Israeli Prime Minister Benjamin Netanyahu, took her to meet a group of young Jewish and Arab patients.

When the women arrived, the children, who were sitting around a table, presented them with pictures they had drawn.

One child held up a Mickey Mouse balloon.

Sara Netanyahu said to the children, "You know this is the First Lady of America?"

"It's nice to be here, it's nice to visit with you today," Melania said.

"How do you like it here?" Mrs. Trump asked. "Are you feeling better?"

A young girl gave the first lady a book and the First Lady softly grabbed her hand, "How beautiful, thank you so much.”

She also handed out back packs with a picture of the White House on them--they were full of coloring books and Dr. Seuss books, which Trump says are her favorite.

"You can do a lot of projects, color and read and write letters," Mrs. Trump said.

Mrs. Netanyahu handed out gift boxes wrapped in blue metallic paper with white bows. Children eagerly opened them to find a board game inside.

The children posed for pictures with the women, asking the press pool to take them.

Hadassah Medical Organization dedicated a bench in honor of the women's visit, engraved with both of their names.

In parting, Mrs. Trump said to the children, "Be strong. Fight. Don't give up."

The first lady told the press it was, "beautiful" to be in Israel and that things were off to a great start.

Mrs. Netanyahu told the press, "A lot of friendship between us and our countries."