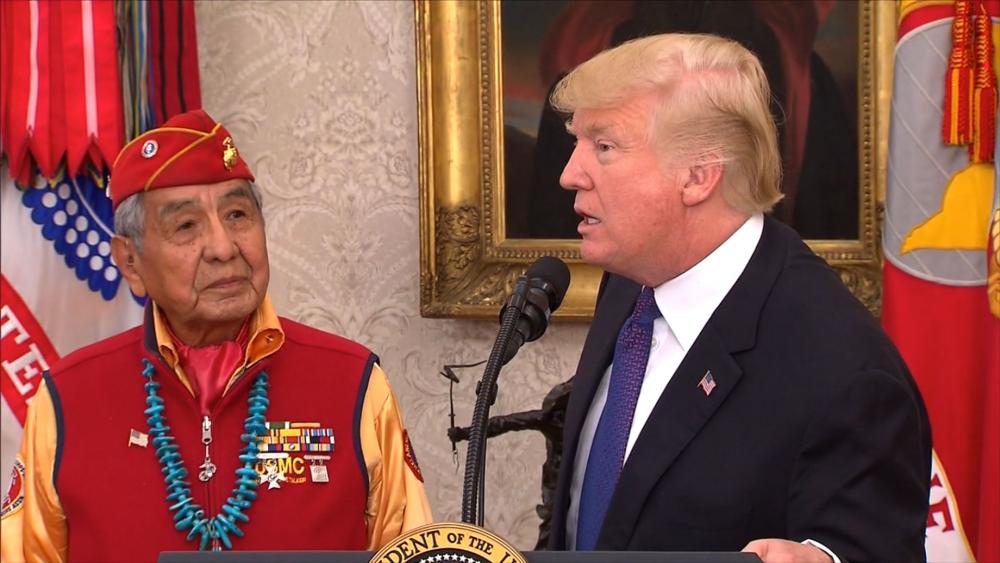 In a week that was supposed to be focused on tax reform, President Donald Trump's team is working to douse a political fire sparked by name-calling.

It happened at an event at the White House Monday to honor World War II Navajo code talkers. The code talkers were a group of heroic Native Americans who helped the U.S. military send coded messages in their own native language during the war.

The president told the men gathered in the Oval Office that they're very special people who have been here a long time. Then he brought up Sen. Elizabeth Warren, D- Mass., calling her "Pocahontas."

When Warren ran for the Senate in 2012, she claimed she was of Native American ancestry. Critics say she's never provided evidence to back her claim.

During Trump's campaign, Warren called him a "loser" as well as other names. Trump responded by calling her "Pocahontas."

While Pocahontas wasn't a Navajo, a spokesman for the tribe says no member of a tribal nation should be the punch line of a joke. Although Pocahontas was a historical figure from the 17th century, many Native Americans say using her name in a disparaging way insults their people and their cultures.

Warren said in an interview on MSNBC that, unfortunately, Trump cannot make it through a ceremony honoring heroes "without having to throw out a racial slur."

White House Press Secretary Sarah Sanders said Monday the use of "Pocahontas" was not a racial slur and that it "certainly was not the President's intent" to use a racial slur.

"I don't believe that it is appropriate" to use a racial slur, Sanders said during her daily briefing but added that she didn't think Trump's comment was such a slur.

Sanders said "the most offensive thing" was Warren's claim to being Native American.

"I think Sen. Warren was very offensive when she lied about something specifically to advance her career, and I don't understand why no one is asking about that question and why that isn't constantly covered," Sanders said.

Warren says she is part Native American and offers stories passed down through the generations of her family as proof.

"I am very proud of my heritage," Warren told NPR in 2012. "These are my family stories. This is what my brothers and I were told by my mom and my dad, my mammaw and my pappaw. This is our lives. And I'm very proud of it."

Scott Brown, her 2012 Senate campaign opponent, even suggested Warren take a DNA test to prove her heritage and to settle the discussion once and for all.

Now Warren is using the president's comments in order to raise money.