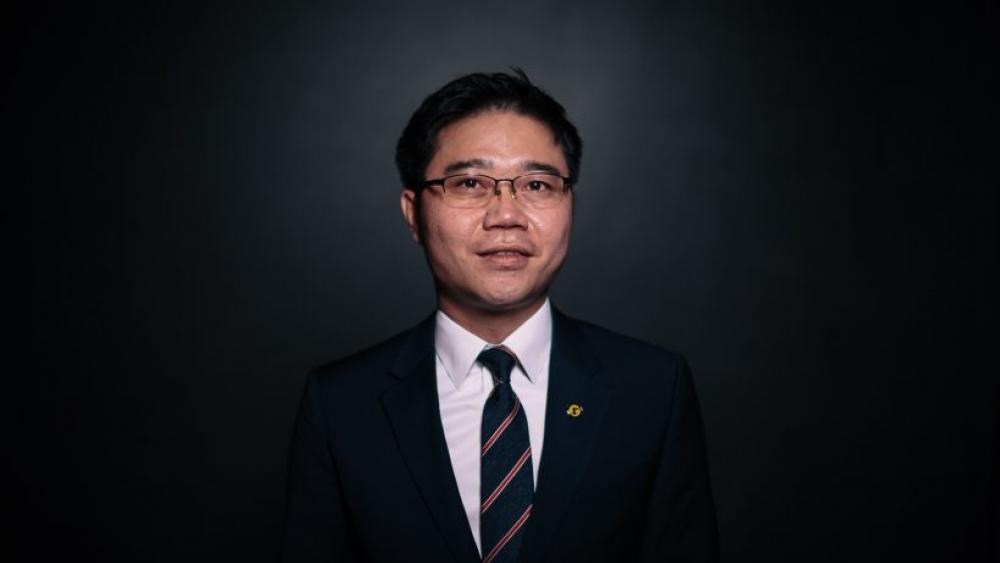 WASHINGTON -- During his first State of the Union address Tuesday night, President Donald Trump made several introductions of people sitting in the gallery with First Lady Melania Trump whom he called "American heroes to remind us who we are and show us what we can be."

These men and women come from all walks of life. Their stories from the president's address are powerful.  Their service or duty is not about politics. It is about their love of country, their fellow man and the ever-present need for individuals to live free.

"We heard tales of Americans like Coast Guard Petty Officer Ashlee Leppert, who is here tonight in the gallery with Melania.  Ashlee was aboard one of the first helicopters on the scene in Houston during Hurricane Harvey.  Through 18 hours of wind and rain, Ashlee braved live power lines and deep water, to help save more than 40 lives.  Thank you, Ashlee," the president said.

"We heard about Americans like firefighter David Dahlberg.  He is here with us too.  David faced down walls of flame to rescue almost 60 children trapped at a California summer camp threatened by wildfires," the president told the assembled audience.

"One of Staub's employees, Corey Adams, is also with us tonight.  Corey is an all-American worker.  He supported himself through high school, lost his job during the 2008 recession, and was later hired by Staub, where he trained to become a welder," Trump said. "Like many hardworking Americans, Corey plans to invest his tax cut raise into his new home and his two daughters' education.  Please join me in congratulating Corey."

"Here tonight is Preston Sharp, a 12-year-old boy from Redding, California, who noticed that veterans' graves were not marked with flags on Veterans Day.  He decided to change that and started a movement that has now placed 40,000 flags at the graves of our great heroes. Preston: a job well done," the president said.

"Young patriots like Preston teach all of us about our civic duty as Americans.  Preston's reverence for those who have served our Nation reminds us why we salute our flag, why we put our hands on our hearts for the pledge of allegiance, and why we proudly stand for the national anthem," he continued.

"Here tonight are two fathers and two mothers:  Evelyn Rodriguez, Freddy Cuevas, Elizabeth Alvarado, and Robert Mickens.  Their two teenage daughters -- Kayla Cuevas and Nisa Mickens -- were close friends on Long Island.  But in September 2016, on the eve of Nisa's 16th Birthday, neither of them came home," the president said.

"These two precious girls were brutally murdered while walking together in their hometown.  Six members of the savage gang MS-13 have been charged with Kayla and Nisa's murders.  Many of these gang members took advantage of glaring loopholes in our laws to enter the country as unaccompanied alien minors  - and wound up in Kayla and Nisa's high school," he continued.

"Evelyn, Elizabeth, Freddy, and Robert:  Tonight, everyone in this chamber is praying for you.  Everyone in America is grieving for you.  And 320 million hearts are breaking for you," the president told the four parents.

"Here tonight is one leader in the effort to defend our country:  Homeland Security Investigations Special Agent Celestino Martinez -- he goes by CJ.  CJ served 15 years in the Air Force before becoming an ICE agent and spending the last 15 years fighting gang violence and getting dangerous criminals off our streets.  At one point, MS-13 leaders ordered CJ's murder.  But he did not cave to threats or fear," Trump explained.

"Last May, he commanded an operation to track down gang members on Long Island. His team has arrested nearly 400, including more than 220 from MS-13," he said. "CJ:  Great work.  Now let us get the Congress to send you some reinforcements."

"As we have seen tonight, the most difficult challenges bring out the best in America. We see a vivid expression of this truth in the story of the Holets family of New Mexico. Ryan Holets is 27 years old, and an officer with the Albuquerque Police Department.  He is here tonight with his wife Rebecca.  Last year, Ryan was on duty when he saw a pregnant, homeless woman preparing to inject heroin.  When Ryan told her she was going to harm her unborn child, she began to weep.  She told him she did not know where to turn but badly wanted a safe home for her baby," the president said.

"In that moment, Ryan said he felt God speak to him:  "You will do it -- because you can."  He took out a picture of his wife and their four kids.  Then, he went home to tell his wife Rebecca.  In an instant, she agreed to adopt.  The Holets named their new daughter Hope," he said.  "Ryan and Rebecca:  You embody the goodness of our Nation.  Thank you, and congratulations."

"Near Raqqa last November, Justin and his comrade, Chief Petty Officer Kenton Stacy, were on a mission to clear buildings that ISIS had rigged with explosives so that civilians could return to the city. Clearing the second floor of a vital hospital, Kenton Stacy was severely wounded by an explosion.  Immediately, Justin bounded into the booby-trapped building and found Kenton in bad shape.  He applied pressure to the wound and inserted a tube to reopen an airway.  He then performed CPR for 20 straight minutes during the ground transport and maintained artificial respiration through 2 hours of emergency surgery," Trump said.

"Kenton Stacy would have died if not for Justin's selfless love for a fellow warrior.  Tonight, Kenton is recovering in Texas. Raqqa is liberated.  And Justin is wearing his new Bronze Star, with a "V" for "Valor."  Staff Sergeant Peck:  All of America salutes you," the president continued.

Otto Warmbier and his parents Fred and Cindy Warmbier

"Otto Warmbier was a hardworking student at the University of Virginia.  On his way to study abroad in Asia, Otto joined a tour to North Korea.  At its conclusion, this wonderful young man was arrested and charged with crimes against the state.  After a shameful trial, the dictatorship sentenced Otto to 15 years of hard labor, before returning him to America last June -- horribly injured and on the verge of death.  He passed away just days after his return," Trump said.

"Otto's Parents, Fred and Cindy Warmbier, are with us tonight -- along with Otto's brother and sister, Austin and Greta.  You are powerful witnesses to a menace that threatens our world, and your strength inspires us all.  Tonight, we pledge to honor Otto's memory with American resolve," he said.

"Finally, we are joined by one more witness to the ominous nature of this regime.  His name is Mr. Ji Seong-ho. In 1996, Seong-ho was a starving boy in North Korea. One day, he tried to steal coal from a railroad car to barter for a few scraps of food.  In the process, he passed out on the train tracks, exhausted from hunger.  He woke up as a train ran over his limbs.  He then endured multiple amputations without anything to dull the pain," the president said.

"His brother and sister gave what little food they had to help him recover and ate dirt themselves -- permanently stunting their own growth.  Later, he was tortured by North Korean authorities after returning from a brief visit to China.  His tormentors wanted to know if he had met any Christians.  He had -- and he resolved to be free," he said.

"Today he lives in Seoul, where he rescues other defectors, and broadcasts into North Korea what the regime fears the most  - the truth. Today he has a new leg, but Seong-ho, I understand you still keep those crutches as a reminder of how far you have come.  Your great sacrifice is an inspiration to us all," Trump continued. "Seong-ho's story is a testament to the yearning of every human soul to live in freedom." 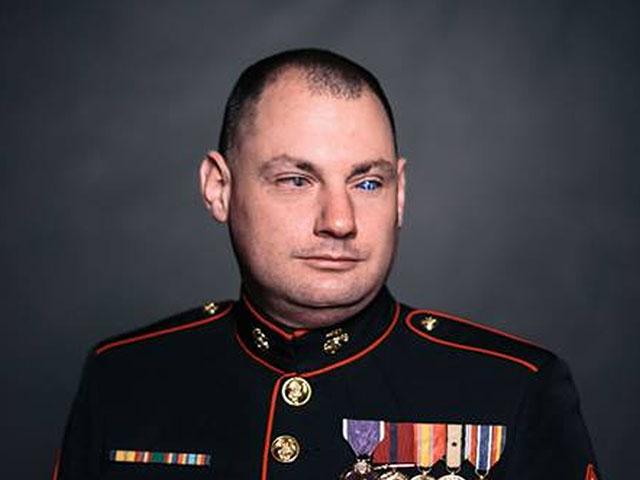 Did You Catch These 'Ordinary' American Heroes Trump Invited to the State of the Union? 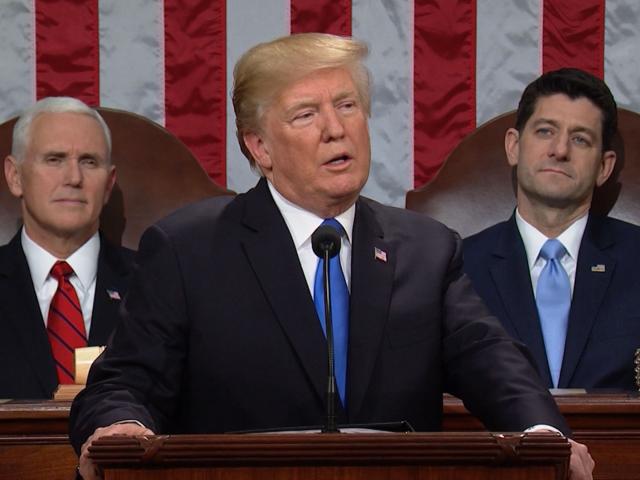