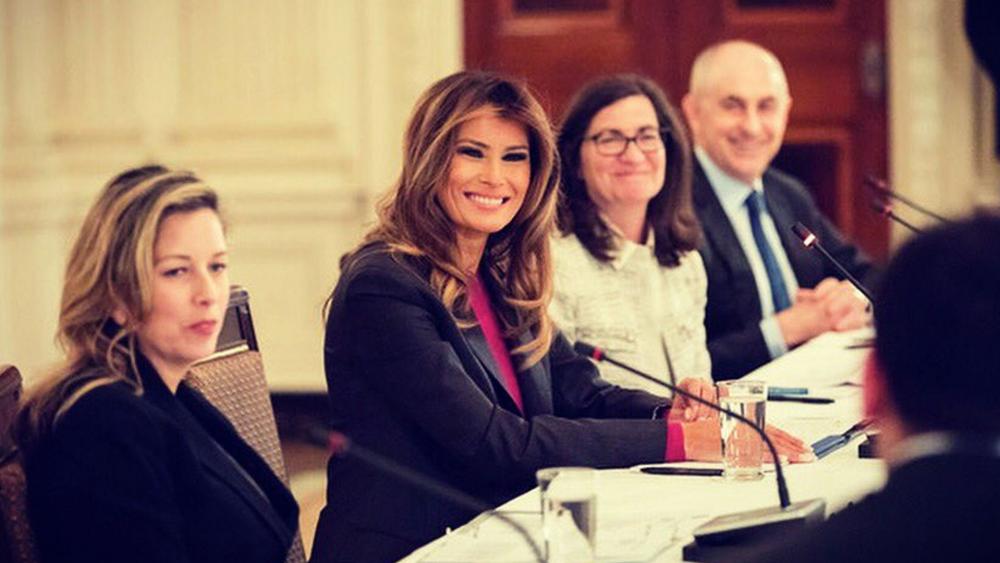 WASHINGTON - Fourteen months into her post as first lady, Melania Trump appears to be stepping out and focusing on her own public agenda - helping children.

This week, she's introduced her husband at an opioid policy event in New Hampshire, hosted her own roundtable discussion at the White House and delivered remarks at the State Department, not to mention an impromptu mid-week FLOTUS/POTUS photo shoot to show off a snowy south lawn.

The roundtable discussion she convened Tuesday was a coming out of sorts on the issue she talked about wanting to champion during her husband's campaign – cyber bullying.

She opened the event in the State Dining Room by expressing her thoughts and prayers for students, teachers and parents affected by the latest school shooting, saying it renews her interest in providing children with the tools they need to grow up safely.

"In my role as first lady, I receive many letters from children who have been bullied or feel threatened on social media," she told the panel she assembled consisting of industry leaders looking at the effects of technology on young people.

She used the occasion to acknowledge the elephant in the room, saying, "I am well aware that people are skeptical of me discussing the topic. I have been criticized for my commitment to tackling this issue and I know that will continue, but it will not stop me from doing what I know is right. I am here with one goal: helping children and our next generation."

It was a very productive meeting on cyber safety & how to teach our children to be responsible digital citizens. Thank you @amazon @Facebook@FOSI @Google @m_Beckerman @Microsoft @Twitter & @snap for coming to the @WhiteHouse today & sharing your valuable insight and expertise. pic.twitter.com/YY2srrbYhP

There's no official role for the first lady. Traditionally she serves as the nation's hostess, planning meals and events at the White House while supporting her husband's agenda and championing a few issues of her own.

However, there are no rules. Each first lady crafts the role as she sees fit.

From the start, Melania made it clear that her son, Barron, comes first and she's worked to keep her 12-year-old out of the spotlight.

She even delayed moving into the White House so he could finish the school year in New York.

In recent days, she's been faced with salacious reports by women who claim to have had affairs with her husband, but Melania has stayed above the fray, instead seeming to focus on her new public role.

"Courage sets apart those who believe in higher calling and those who act on it," she said in remarks Friday at a State Department ceremony to honor "Women of Courage."

"It takes courage not only to see wrong, but strive to right it. Courage is what sets apart the heroes from the rest. It is equal parts bravery and nobility," she continued.

The Slovenian immigrant is only the second foreign-born first lady (Louisa Catherine Adams is the first) and sure to serve as a role model for other immigrants who dream of roles of American influence.

Since President Donald Trump took office, Melania's approval ratings have gone up and are currently higher than those of her husband.

Like first ladies before her, Melania has become a worldwide fashion icon, but for now, she's demonstrating a laser focus on one goal.

"I'm focused on helping children everywhere that I can and I believe they learn by what they see around them," she said.