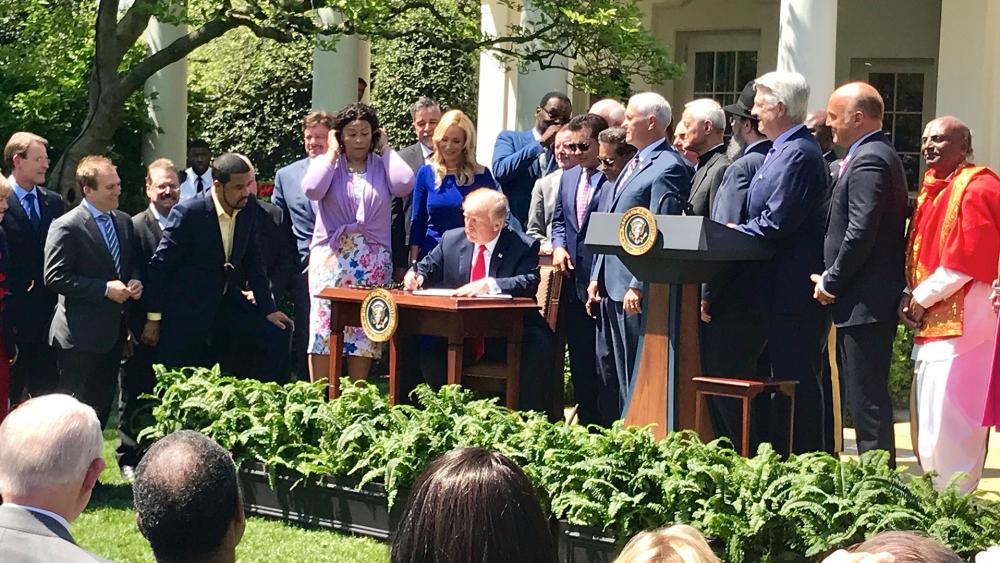 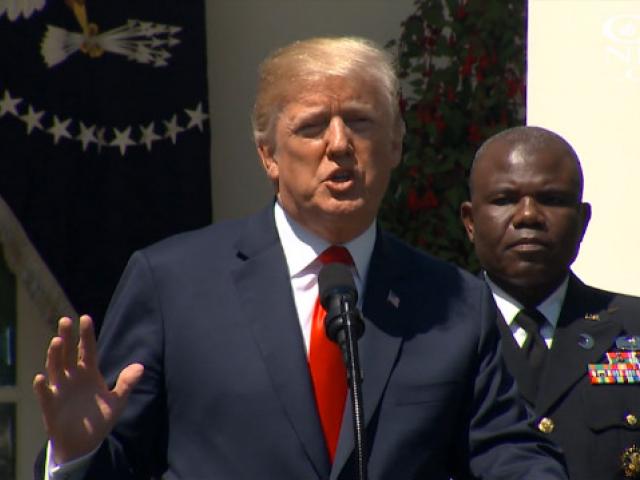 "As president, I will always protect religious liberty," Trump told faith leaders gathered in the White House Rose Garden. "Prayer has always been the center of American life. It's forged the identity and destiny of this great nation that we all love."

"The greatest words the president and I ever hear is, 'I'm praying for you,' " Pence said. "The American people believe in prayer."

The order calls for the executive branch to ensure "conscience protections" that grants people and institutions free reign "to practice their faith without fear of discrimination or retaliation by the federal government." Here's what it says:

"It shall be the policy of the executive branch to vigorously enforce Federal law's robust protections for religious freedom.  The Founders envisioned a Nation in which religious voices and views were integral to a vibrant public square, and in which religious people and institutions were free to practice their faith without fear of discrimination or retaliation by the Federal Government."

It also directs the Treasury Department not to target churches or religious groups for speaking about political issues:

"In particular, the Secretary of the Treasury shall ensure, to the extent permitted by law, that the Department of the Treasury does not take any adverse action against any individual, house of worship, or other religious organization on the basis that such individual or organization speaks or has spoken about moral or political issues from a religious perspective, where speech of similar character has, consistent with law, not ordinarily been treated as participation or intervention in a political campaign on behalf of (or in opposition to) a candidate for public office by the Department of the Treasury."

Evangelist Franklin Graham praised the move saying, "I'm extremely grateful that we have a president who realizes the importance of prayer, faith, and religious freedoms to our nation."

Johnnie Moore, an unofficial spokesman for the president's group of faith advisors, said it's "good for America" that President Trump has welcomed the faith community with open arms.

"This executive order is the product of the President's unwavering prioritization of faith and religious liberty and reflects the smart work of people like Jared Kushner and advisors in the policy and public liaison divisions who met with hundreds and hundreds of leaders and government officials to assess ways in which the government can partner more effectively with communities of faith," Moore said.

He also points out how important it is for there to be a faith-based liaison associated directly with the White House.

"Ordering every department of the federal government to work on faith-based partnerships - not just those with faith offices -  represents a widespread expansion of a program that has historically done very effective work and now can do even greater work," Moore continued.

READ: The Difference a Year Makes: Johnnie Moore on Freedom of Religion in the Age of Trump

"I've always believed that America is better when it's faithful, together. Anything any administration can do to demonstrate a positive partnership between our faith communities and government, the better off our country will be and so I herald this important initiative that empowers people of faith in America," Laurie said.

"It remains to be seen whether this Administration is truly interested in building an initiative that is focused on helping diverse faith communities serve those in need, or if the real value they see is in using the office as a platform where elite political supporters can pose as statesmen," Wear said.

“I hope this Administration will keep the long-view in mind. I hope they will understand the decisions they make now, the focus of the faith-based initiative today, will greatly influence how future administrations consider the role of faith communities in this country," he added.

The White House Office of Faith-Based Neighborhood Partnerships was started by President George W. Bush in 2001. Under President Barack Obama, Joshua DuBois established an advisory council where members were appointed to one-year terms.

The National Day of Prayer is held on the first Thursday of May and this year's theme is "unity in America." 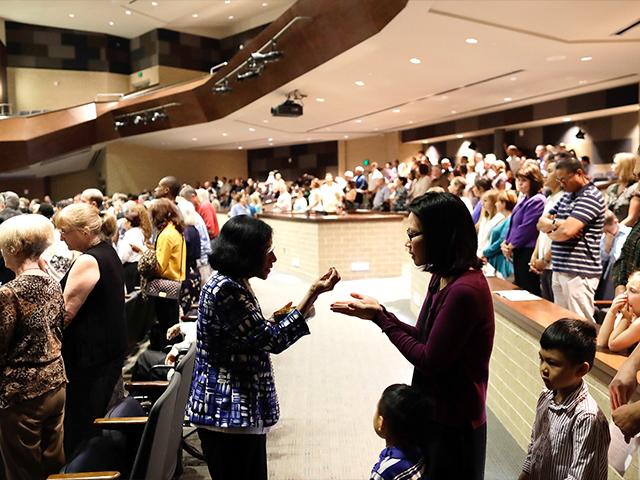