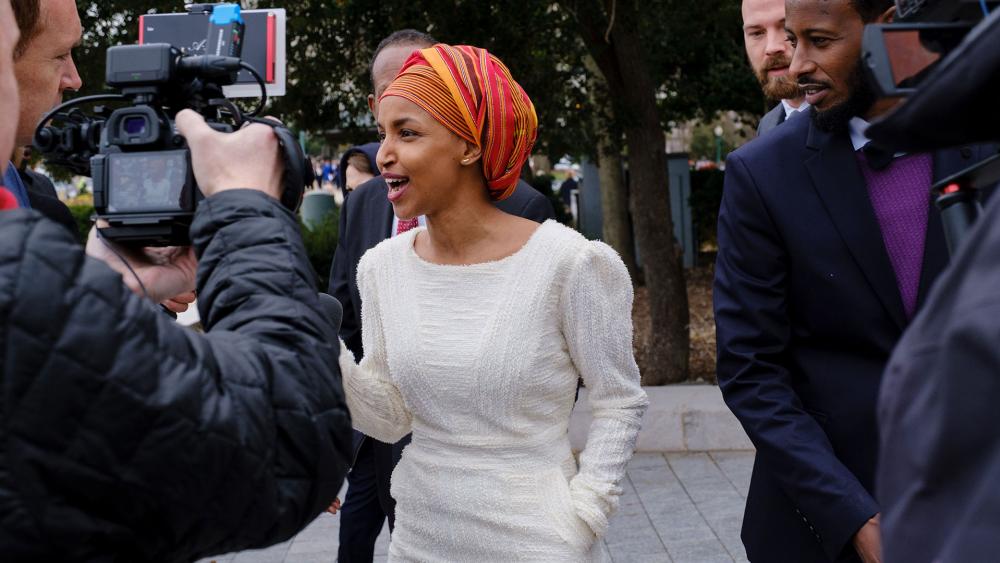 WASHINGTON – President Donald Trump joined the chorus of leaders who slammed Rep. Ilhan Omar (D-MN) for using what critics call "anti-Semitic tropes" in a tweet she sent out over the weekend criticizing an American organization that supports Israel.

"I think she should be ashamed of herself," Trump told reporters on Air Force One as he flew to El Paso, Texas, for his first campaign rally of the year. "I think it was a terrible statement. And I don't think her apology was adequate."

After pressure from House Democratic leadership, Rep. Ilhan Omar (D-MN) did eventually apologize for the tweets.

"My intention is never to offend my constituents or Jewish Americans as a whole," she said. "We have to always be willing to step back and think through criticism, just as I expect people to hear me when others attack me for my identity. This is why I unequivocally apologize."

The controversy ignited late Sunday when Omar, one of the first two Muslim women elected to Congress, suggested the American Israel Public Affairs Committee is paying lawmakers to support the Jewish state, tweeting Sunday, "It's all about the Benjamins baby."

It's all about the Benjamins baby https://t.co/KatcXJnZLV

Her words were in response to a tweet by journalist Glenn Greenwald, who'd criticized GOP leaders for targeting Omar and another Democratic Muslim lawmaker, Rep. Rashida Tlaib, for being openly vocal in their hostility against Israel.

"Equating @IlhanMN & @RashidaTlaib's criticism of Israel to Steve King's long defense of white supremacy is obscene (McCarthy said it's worse). In the US, we're allowed to criticize our own government: certainly foreign governments. The GOP House Leader's priorities are warped," he charged.

Equating @IlhanMN & @RashidaTlaib's criticism of Israel to Steve King's long defense of white supremacy is obscene (McCarthy said it's worse). In the US, we're allowed to criticize our own government: certainly foreign governments. The GOP House Leader's priorities are warped.

Meanwhile, The Hill notes that while AIPAC does sponsor congressional delegations to Israel, the organization does not donate money to political candidates.

On Monday, House Democrats, led by House Speaker Nancy Pelosi, lent their voices to a bipartisan backlash against Omar's remarks, which they call anti-Semitic.

"Congresswoman Omar's use of anti-Semitic tropes and prejudicial accusations about Israel's supporters is deeply offensive," Pelosi said in a statement issued by her office Monday and signed by other Democratic leaders.

"We condemn these remarks and we call upon Congresswoman Omar to immediately apologize for these hurtful comments," the statement read.

The caustic letter came at the behest of two Jewish House Democrats – Reps. Josh Gottheimer (NJ) and Elaine Luria (VA) – who urged Democratic leaders to take Omar to task over the offensive tweet.

"As Jewish Members of Congress, we are deeply alarmed by recent rhetoric from certain members within our Caucus, including just last night, that has disparaged us and called into question our loyalty to our nation," read a letter from the two lawmakers, The Washington Post reports.

"We urge you to join us in calling on each member of our Caucus to unite against anti-Semitism and hateful tropes and stereotypes," they said.